They called it the Devil’s water, but we convinced them otherwise. United Nations Children’s Fund (UNICEF) and other international development agencies promoted the use of groundwater as a source of drinking water in rural Bangladesh to combat infant mortality due to waterborne diseases. This is an example of good intentions gone awry. I am talking about the arsenic contamination of groundwater in Bangladesh, which is the source of potable water for ninety-five present of the people of Bangladesh.

This is an example of good intentions gone awry.

When the crisis was discovered in the early nineties, UNICEF itself reported that more than 70 million people were consuming arsenic-contaminated water. There were frenzied calls for action, international mass media highlighted the issue and there was even litigation in the world courts. Researchers from all over the world came to Bangladesh and conducted studies and reported their findings in journals of high repute. Conferences galore, there were initiatives taken to mitigate the crisis. Young engineers at that time like myself ran to confront the crisis and tackle the single most extensive slow poising in the world. 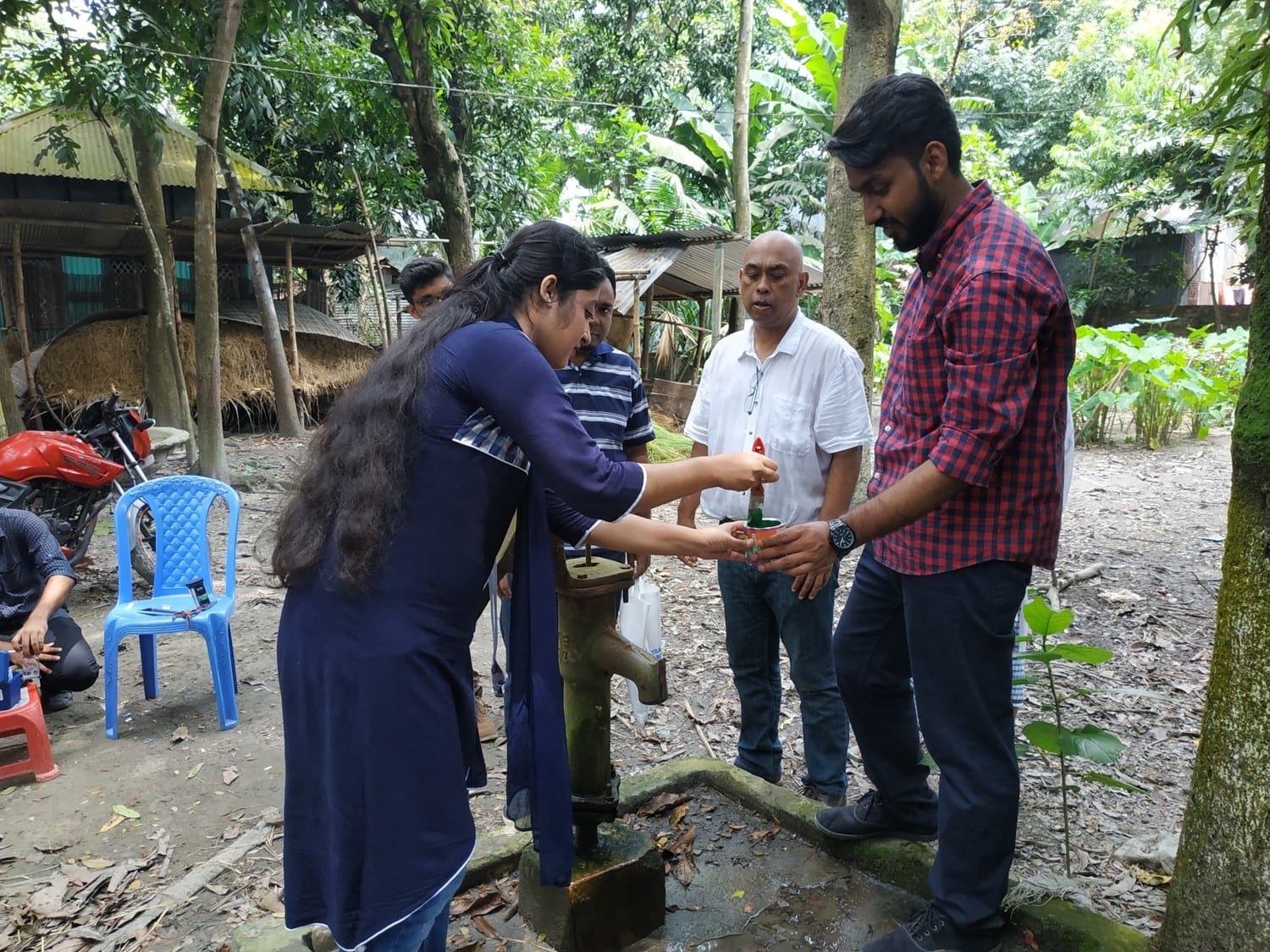 Volunteers paint a hand pump green to indicate that the well water is arsenic safe.

I, a UNICEF consultant at that time, initiated the first large-scale community-based arsenic mitigation effort in Bangladesh. In a comprehensive project which was to serve as a replication model in 200 villages in affected areas, we tested and demarked the wells as arsenic safe or unsafe, provided alternate safe water options, and educated and empowered the community about arsenic mitigation.

There is no trace of the projects I initiated. No bore hole wells are marked as safe, no trace of safe alternate sources of water, and the community has only a vague idea about the arsenic contamination of their groundwater.

They were great initiatives with an Achilles heel: they were all donor dependent. When the donors’ funding dried up, media interests shifted to other crises and the projects puttered out. Decades later when I went to visit the same villages, one of them happened to be my own. There is no trace of the projects I initiated. No bore hole wells are marked as arsenic safe or unsafe, no trace of alternate arsenic-safe sources of water such rain water harvesting, the community has only a vague idea about the arsenic contamination of their groundwater.

Often misconceptions prevail. The common assumption is that if they bore the holes deeper they will get arsenic-free water. This is not necessarily true, and this lie is propagated by the well drillers. The deeper they drill, the more money they can earn. Another charlatan trick the well drillers pull is to place a guava leaf in a glass of water. Guava leaf tends to chelate the iron in water and turns the water purple. If the water has low iron and the color does not change, the drillers claim that the well water is arsenic free. But they do not actually test for arsenic in the water. This kind of anecdotal evidence that I have disputes claims by the authorities that the arsenic crisis in Bangladesh is in control.

We need in place a more sustainable mitigation effort that does not depend on donor interest and donor funding.

We need in place a more sustainable mitigation effort that does not depend on donor interest and donor funding. This time, the arsenic mitigation effort has to be community based, marked by self-reliance and volunteerism. The role of the civic society. The community needs to be empowered and take the role that resource-challenged and inept government intuitions cannot provide. Civic society can help the communities to be empowered.

Just such a partnership between civic society and the villagers who need the help is“Factum Illuminary,” a group of engineers who have adopted a village in the arsenic-affected area, and have instituted some self-sustaining arsenic mitigation efforts. Members of the group donated money to raise $100 to buy a field arsenic test kit, and with local youths tested the wells that have never been tested. If a well tested as arsenic safe, the group painted the snout of the bore hole’s hand pump green. In the process, they are training the local youths how to test the wells properly. In future, the youths themselves will have the capacity to do the testing. 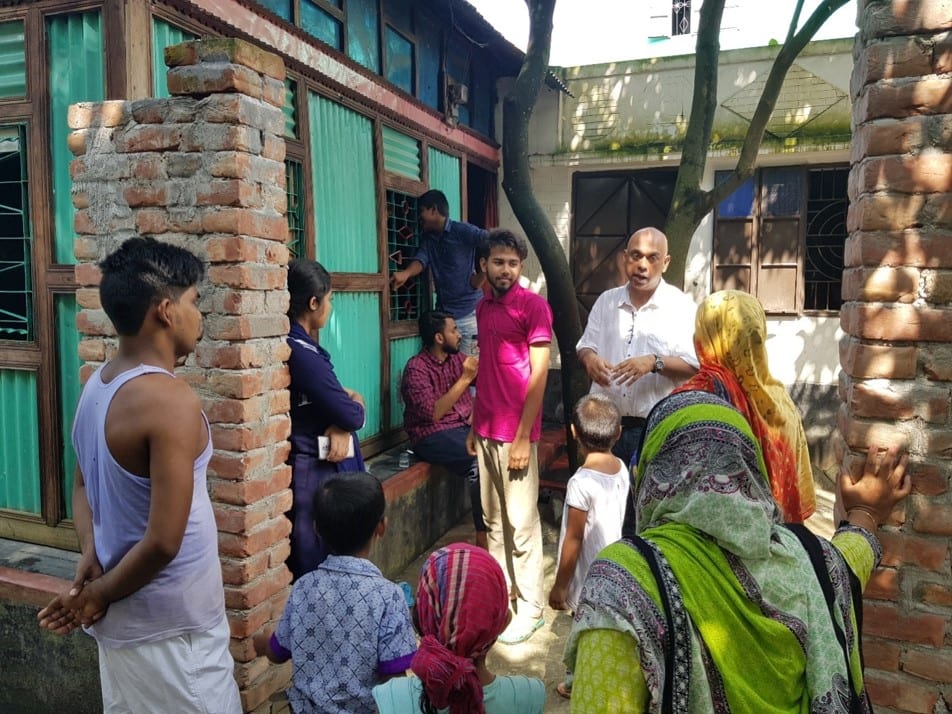 While testing the wells, the young engineers visited homes to engage the community and inform them as to the adverse health effects of chronic arsenic consumption through drinking and cooking with arsenic-contaminated water. The local youth that were tagging along with them also learned public health information regarding chronic arsenic exposure and how best to inform the community. The young engineers promoted the sharing of arsenic-safe well water with neighbors. They engaged the village’s elected officials to promote the concept of testing all newly installed wells, sharing arsenic-safe well water, and collectively sharing the financial burden of maintaining the wells that are arsenic safe. Collective financial responsibility eased the expense to well owners who were asked to share their safe water with neighbors. The local high school acquired an arsenic field test kit. We trained the school’s science teacher to use it. We also explained the importance of testing wells for arsenic after installment, and to put a local ordinance in place to ensure this is carried out.

The arsenic mitigation effort that Factum Illuminary has conducted could be a viable self-reliant model of arsenic mitigation that can be adopted by other villages and easily supported by other civic organizations such as Rotary Foundation, Lions, and the civic society at large. This model should become a cause celebre, and replicated to help arsenic-affected people take relatively easy steps to mitigate this mass-scale chronic poisoning. Quoting John Donne, “For whom the bell tolls,/ It tolls for thee.”

Dr. Nadim Khandaker is faculty at the Department of Civil and Environmental Engineering at North South University Bangladesh and a licensed professional engineer in Canada. He has held positions in safe water supply with UNICEF, Canadian International Development Agency, Environment Canada and other water agencies worldwide.

This is the third in a series on principles based on the textbook Humanitarian Engineering: Creating Technologies that Help People, by Kevin Passino. This series is adapted by the author for Engineering for Change. Download Humanitarian Engineering, 3rd Edition, for free. In line with the two previous principles (linked below in case you missed them), it is important to understand the social and physical context of the people in a community. Each person has a different...