How a developing country could defend against tsunamis 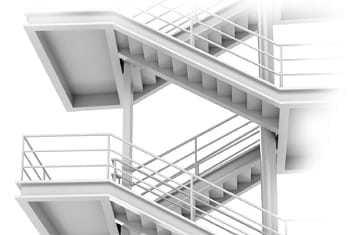 ASME gave an overview of the tsunami defenses in Japan, and we asked a structural engineer for tips on how prepare in a developing country. Photo courtesy of ASME

The tsunami that the Tohoku quake triggered off the coast of Japan struck a country that was unusually prepared for that kind of disaster, if not for one of that magnitude. Japan’s low-lying coast bristles with fortified vertical evacuation buildings, steel platforms raised on columns, and sea walls. The American Society of Mechanical Engineers outlines the country’s defenses in a new investigative news article on tsunami evacuation, “Tsunami Forces Debate over Vertical Evacuation.”

For the first time, a US community is discussing investment in a tsunami-resistant building, the article explains. The debate, as always, turns on money. If that kind of investment makes some US taxpayers balk, what should coastal communities in developing countries do to prepare for disaster?

We put the question to Ian Robertson, a structural design professor at the University of Hawaii at Manoa. Robertson is a member of the university’s Tsunami Engineering Research Initiative, he helped write the FEMA P646 guidelines for vertical construction for tsunami evacuation, and he lives in a state that has a vested interest in tsunami defense. He gave us an overview of what could work best on a budget, and what’s probably not worth the money.

Education is number one

What’s the best, and probably the cheapest, tsunami defense? Robertson’s answer was one that could put a few structural engineers out of a job: “Public education,” he said.

“There were thousands of lives lost in Japan, but if people hadn’t evacuated, they would have lost a million,” Robertson said. Widespread public education campaigns had trained people to head for high ground when they felt a quake, and that took hundreds of thousands of people beyond the reach of the wave.

Assess what you have

To establish defenses on a budget, experts should first evaluate which, if any, of the structures they already have could stand up to a tsumani.

Some bridges may be out of harm’s way, for example. And some buildings may serve as evacuation points. “For a 12-story building that’s designed for high-seismic activity, you wouldn’t have to pay anything to accomodate for a tsunami,” Robertson said. 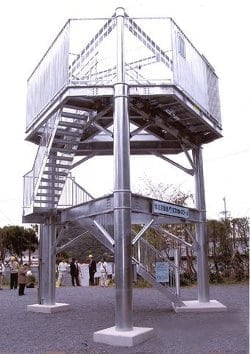 Double up and don’t retrofit

One Japanese tsunami defense is raised steel platforms, as the ASME article points out. Those may be cheaper than tsunami-resistant construction in the short run, but Robertson doesn’t recommend those.

He has two reasons: Anything built just for tsunami evacuation will sit around unused for most, or all of its lifespan. And that’s a waste.

The second reason is that the towers have a certain height, and it’s hard to predict how high a tsunami might be. People in thirty-foot towers could die in a big enough wave. A high rise, on the other hand, is almost certain to stand above the water. Instead, communities on a budget should build high-rise hotels, apartments and office buildings that double as fortified evacuation points.

The community should invest in tsunami-proof construction before the first shovel breaks soil. Retro-fitting an existing building is costlier, Robertson said.

A government could incur the extra cost of fortifying a private building against tsunami, Robertson suggested. That way, a hotel owner wouldn’t have to pay out of pocket to protect the community, and the community would have an evacuation point.

Robertson’s recommendations come with a warning: When preparing for a tsunami, you have to be right about its size. “What we saw in Japan was more than anybody anticipated, even them,” he said. “We know so little about tsunamis. The Japanese certainly didn’t know what to expect.”

That may be the best reason why the most effective life savers could be good education and a plan to head for high ground.

Climate change will affect every aspect of our lives – including the buildings we live and work in. Most people in the US, for example, spend about 90 percent of their time indoors. Climate change is fundamentally altering the environmental conditions in which these buildings are designed to function. Architects and engineers design buildings and other structures, like bridges, to operate within the parameters of the local climate. They’re built...