How Ushahidi is the map app for development projects 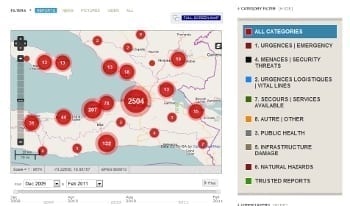 This is a screenshot of the Ushahidi demo that shows updates in Haiti.

Rescue and relief workers know Ushahidi in conjunction with the earthquakes in Haiti and Chile, wildfires in Russia and Australia, floods in Pakistan and other emergencies. But it’s not just for crises. It’s a mapping and data visualization tool that lets the public weigh in via text messages, Twitter, Facebook, news sites and blogs, and email. It sorts and judges the data for accuracy, then maps it in near real time. Because of its speed and knack for imposing order on chaos, the platform is linked to crisis management. Ushahidi also works in the long term, however.

“It’s limited by your imagination,” says Erik Hersman, director of Ushahidi’s operations. “Some people want to use it for, you know, pothole tracking. Others for crime in their community. Others, if water pumps are out, for marking them. It’s really up to the people. It’s like a blog: It can be very creative—or not—depending on who’s using it.”

Take two examples of Ushahidi deployments in non-emergencies that may interest the E4C community:

First: Paul Jones, a medical student, has used Crowdmap, the Ushahidi platform in the cloud, to map hospitals in Honduras. His goal is to first plot the locations of all of the places that offer medical assistance in the country, then he wants to add reports on the temporary clinics and other healthcare initiatives that volunteers and NGOs set up. The finished product could streamline aid efforts in the country by preventing people from humanitarian organization target aid without doing the same things twice.

Second: A Russian platform based on Ushahidi, called www.holoda.info, helps governments plan by mapping the places where people are most affected by Russian winters. It also maps calls for help when disaster does strike.

Ushahidi: Creating a New Narrative from Ushahidi on Vimeo.

The thought of enlisting strangers in a crowd to do the kind of fieldwork that salaried development workers do may be off-putting. Crowds aren’t accountable, after all, and they can make mistakes. But the crowd doesn’t have to replace the experts, it can help them. “I take a more holistic view,” Hersman says. “The two can augment each other.” Experts in an organization can post updates and they’ll weigh heaviest in Ushahidi. But the strangers, with their sheer numbers, will have wider coverage than a single organization, and their updates can fill in gaps.

The Ushahidi platform is open source and available for free downloads. The Ushahidi team welcomes developers to tweak it to their needs. Crowdmap is the same software, but in the cloud. Users don’t have to have it on their server, they can just make an account and use it, similar to how we use gmail or Flickr.

SwiftRiver is another platform that works with Ushahidi using apps that sort data and vet the sources. When a flood of data streams in from cell-phone-armed crowds in a crisis, SwiftRiver makes the work of organization much faster. “It’s a tool for curating real-time data,” Hersman says. “It takes large streams of information and tries to make sense of it.”

SwiftRiver Dataflow 1 from Ushahidi on Vimeo.