Open-source cellphone networks are now on every continent 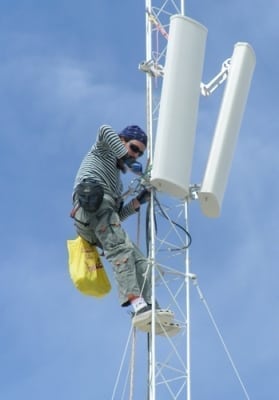 OpenBTS cellphone networks can be small, do-it-yourself project, or they can scale up to deliver the same service as major carriers. Photo courtesy of Range Networks

Three men who believe that cellphone service should be cheap and accessible to everyone have found a way to make it happen. The creators of OpenBTS, the open-source cellphone network, launched a startup and have delivered cheap cellphone networks to the world’s biggest mobile tech corporations, governments and other clients on every continent. (Yes, even Antarctica—the Australian base is connected via OpenBTS.)

As we reported last year, OpenBTS is a network built on open-source software and hardware that works seamlessly with the average cellphone. With smart coding and decentralized call processing, the system has reduced the hardware needed and cuts the cost of installing and running a cellphone network to about one-tenth that of a traditional setup.

And, importantly for developing countries, the base tranceivers (the gear in the cell towers) are energy sippers that can run on PV cells. The bottom line: The whole network can reduce the cost of service to about $2-3 per month for subscribers.

We spoke with Glenn Edens, a co-founder of Range Networks, with a resume that includes such titles as former head of Sun Lab at Sun Microsystems, former president of AT&T Strategic Ventures, Chief of Strategic Technology at Hewlett-Packard and others. Edens summed up the last six months at Range Networks and told us what lies ahead for the startup.

Glenn Edens: “People are looking at adding service to areas where they don’t have it today. Or adding it to enterprises and residences.

“We tend to get involved where it’s a new market—Africa, India, even Canada. In the US, we look at applications in rural areas, or we solve coverage problems in populated areas.”

The future of mobile telephony

Glenn Edens: “We see all of the carriers moving to voice-over IP or packet-based networks [like OpenBTS]. Long-term evolution (LTE) networks [LTE follows 4G networks] will be packet-based.

“There’s a lot of interest in these kinds of systems. Right now, we’re the only company we know of that can provide a completely stand-alone solution at our price range. The other ones still need traditional gear. We don’t know of anyone who has a deliverable solution that’s as small as ours.”

Range Networks is scaling up its product to provide a quality of cellphone service on par with that of the major carriers. But it hasn’t abandoned the open source ethos on which it was built. It’s still possible to set up a do-it-yourself network with new and improved open-source code and hardware. For more on how to do it, and for code updates and other news, visit openbts.org

A lifeline to the poor

We’re fans of mobile technology as a lifeline to off-grid communities and to the world’s poor. We’ve seen how cellphones can improve healthcare (and here) education, crisis management and monitoring development projects. Open source networks like OpenBTS could be the way to make the technology accessible to everyone.