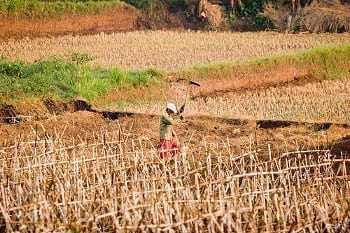 Farms, like this dry rice farm in the Ciampea district of Indonesia, are the biggest water consumers in the world. Streamlining water use in agriculture could be one of the cheaper ways to offset water shortages by the year 2050. Photo credit: Danumurthi Mahendra/DMahendra/Flickr

Looming water shortages could afflict more than 1 billion people by the year 2050, a new study suggests. But there could be a bright side. The roots of the problem won’t surprise anyone who has been paying attention: population growth and the tough-to-predict effect of climate change on water supplies could exacerbate water shortages in cities.

The solutions are good land management and, yes, engineering to prevent the crisis before it comes, researchers led by The Nature Conservancy wrote in a paper published online March 28 in the journal Proceedings of the National Academy of Sciences.

“Don’t take the numbers as destiny,” Robert McDonald of The Nature Conservancy told the news wire AFP. Instead, he said, we should take his team’s results as a challenge. “It’s just a sign that a lot more investment is going to be needed, either in infrastructure or in water-use efficiency,” he said.

Now, 150 million people live in cities that suffer perennial water shortages, according to McDonald’s team. Perennial shortage is defined as less than 26 gallons (100 liters) of sustainable surface and groundwater flow per day, per person. In comparison, the average person in the United States uses 80 to 100 gallons (300 to 380 liters) per day, the US Geological Survey reports.

Hardware may come to the rescue. Cities with seasonal shortages could build dams to increase water storage, for example. On the other hand, climate change is unpredictable and a long-term drought could complicate dam plans, the researchers wrote. As another solution, cities with perennial shortages could ship water in long distance. And coastal cities might consider desalination schemes.

The costs of those solutions, however, could be high. Transporting 264 gallons (one cubic meter) over a distance of 62 miles (100km) could cost $.06. And desalination could cost $.61-$.81 cents to process the same amount of water, the researchers wrote.

Morning light reflects on the water at the Nature Conservancy’s Johnsonburg Swamp Preserve in Warren County, New Jersey. Proper land management could be one of the cheaper solutions to water shortages that the environmental organization predicts. Photo credit: Nicholas_T/Flickr

Efficient land management could offset shortages, too, and maybe cost less money. Globally, agriculture is the main water consumer, so even small efficiency gains on farms could have a big impact. The examples the researchers offer include a US policy of paying some farmers outright to not use the water they would normally use. Another is a South African initiative to uproot plantations of non-native tree species that sop up too much water.

None of the measures will be cheap. The investment needed could top $180 billion per year, according to a separate study that the researchers cited.

“It is a solvable problem, but one that will take money, time, political will, and effective governance,” the researchers wrote. “These kinds of commitments are crucial if the world is to ensure that all urban residents can enjoy their fundamental human right to adequate drinking water.”

A newly minted workshop in Lagos, Nigeria, is manufacturing some of the most versatile farm trucks on the planet. AgRover is a three-wheeled vehicle built to solve a long list of problems on Sub-Saharan African farms. It can haul up to 900kg (2000lb) of produce, water or people at a top speed of 32kph (20mph). But it is also a multi-purpose platform. Farmers can open a panel on the truck...