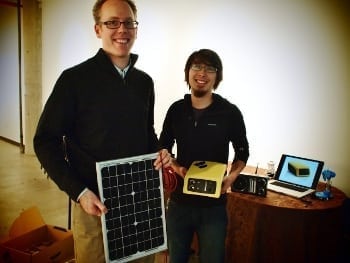 A start-up in San Francisco may have found a way to entice telecom companies to distribute its new rechargeable power devices to off-grid African communities.

Fenix International is testing its new cellphone-charging battery and generator in East Africa, a fiercely competitive market. Used car batteries are the cheap go-to source for power in off-grid communities there. But Fenix International wants to sell its similarly sized, but greener and more efficient ReadySet battery—with a small generator—for US $100-150 instead.

The company is counting on small business owners to buy it, and telecom companies to distribute it. That business model is an experiment in entrepreneurship that we’ll be watching.

Mobile phones appear in nearly every community on the planet. Worldwide, few products other than Coca-Cola have achieved such epic distribution. By targeting cellphone owners with its off-grid energy solution, Fenix hopes to tap into the telecom companies’ distribution network. The start-up is in talks now with several international carriers that may sell ReadySet along with their mobile phones. The reason for their interest is simple. 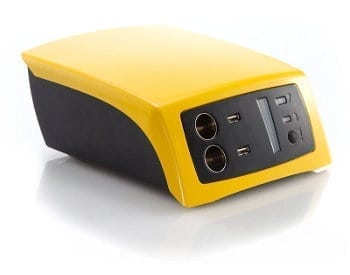 This is the ReadySet, the battery that phone companies could distribute to off-grid homes in developing countries. Photo courtesy of Fenixintl.com

People who can keep their phones charged buy up to 14 percent more air time, according to the GSM Association of mobile operators. In the same report, the association pointed out that the potential to increase revenue is huge—500 million cellphone users live off grid.

Michael Lin, Fenix’s founder, calls the partnership with telecom “an interesting departure from what development has been all about.” But it may be key in putting power into impoverished communities.

Compared to the competition—car batteries—ReadySet is a badly needed improvement. First, it’s tough: In lab tests, Fenix has dropped it from three feet onto concrete on 18 surfaces, blasted it with UV rays, and sprayed it with salt water, and it did not leak or die.

Secondly, it preserves its ability to retain a charge longer than other rechargeable batteries because it shuts down before it drains completely.

Third and fourth, it’s stylish, even cute, and simple to use. It has USB and cigar lighter ports to match the cords that East Africans use.

And finally, it comes bundled with one of two generators: a solar panel, or a bicycle attachment. Wind and water generators may be underway. Or it can just plug into an outlet to charge. Today, people who use car batteries must travel for hours or even days to recharge. ReadySet could change that. 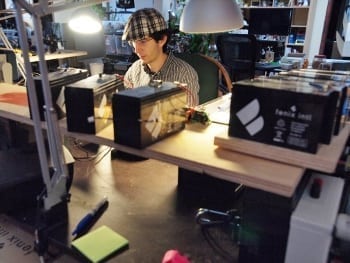 The guts of ReadySet batteries and boxes for shipping surround Paul Jehlen while he works in the Fenix Int’l home base in San Francisco. Photo credit: Rob Goodier

ReadySet is better, but car batteries are cheaper. To beat them, Lin hopes to sell ReadySet to small business owners. In field trials, entrepreneurs offered cellphone charges for $0.25 each, or bartered them for time pedaling the bicycle generator.

ReadySet has a much longer lifespan than a car battery, too, when both are repeatedly drained and recharged. This may even out the price difference in the long run.

“People charge batteries the way they gather water,” Lin tells E4C. “They take a jerry can to the well, and they take a car battery several miles to the nearest village to charge.

“Building upon the existing culture was the inspiration for this solution,” Lin says.

At its heart, ReadySet is a fancy car battery. It mirrors the technology in place in the region now, so people may recognize it and adopt it more easily. The main difference is that its generators move the well closer to the jerry can.

“Power to the people,” the activists chanted in the 1960s. The revolutionaries of yesteryear never dreamed of the scientific and technological innovations that could light up distant shelters and communities in the darkest corners of Earth. We are on the cusp of an energy revolution that has the potential to improve the quality of life for the world’s most disadvantaged and poor. Distributed-energy technologies such as micro-grids can provide an...