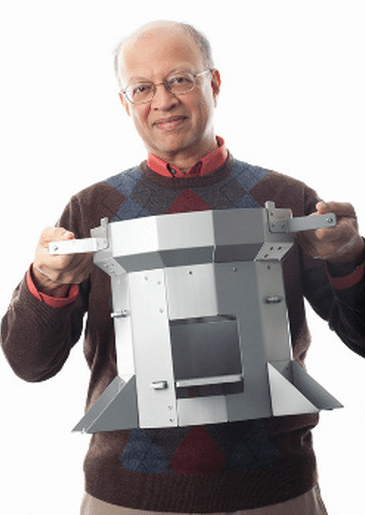 Ashok Gadgil’s name is attached to huge, and hugely influential projects in the developing world. He deals in big numbers. Five million people in six countries drink water that his UV Waterworks disinfects. Twenty-thousand people cook with his fuel-efficient stoves in Darfur. And more than 100 million people in developing countries use compact fluorescent lamps as a part of Gadgil’s program for utility-sponsored energy efficiency. (This info-graphic sums up his innovations.)

“It is a waste of time to try to solve problems in a small way,” Gadgil told E4C. “You need to think about how will you go to scale and make lives better for at least 10 million people.”

People have noticed. This month, Gadgil claimed his latest prize in a decades-long string of accolades, the Lemelson-MIT Award for Global Innovation, which comes with $100,000. What does he plan to do with it? Something risky, he says. Some kind of project that’s hard to fund, but he’s not sure what, yet.

In Gadgil’s day job, he directs the Environmental Energy Technologies Division of Lawrence Berkeley National Laboratory, and he’s a civil and environmental engineering professor at the University of California, Berkeley. We asked him five questions (plus one).

E4C: What motivates you to do what you do?

AG: If there is somebody who asks why I should bother, I would tell them, Look, we are a single human society on a single planet, and we share this planet together. If the bottom four billion follow the high-carbon trajectory to prosperity that we have followed in the developed world, we could not handle the pollution. So, we better find a way to develop along a low-carbon trajectory.

The self-centered answer is that whatever we’re doing in the industrial world, we’ll not by ourselves be able to stop global climate change. So, we’ve got to work with them.

E4C: What promising trend do you see in technology for global development today?

AG: The most exciting thing I see is that the best students in the best engineering schools across the United States are excited and enthusiastic about how they can make the world a better place. They’re seeking a more meaningful life as engineers, saying, ‘we are also citizens of this planet, and how can we make this world a little better?’”

E4C: What do you think is a dead end in your field that some people just won’t let die?

AG: The dead end that I see in the field, in which people just keep trying to walk through a brick wall, so to speak, is that people don’t try to understand the world view of those they’re trying to help. I would say that the developing world is a museum of failed projects from developed countries because they did not answer the right question. We are very good at answering questions, but not so good at finding the right questions to answer.

For example, in Darfur, some well-meaning people collected money to air-ship state-of-the-art dentist chairs into the refugee camp. Into tents. There was no electricity to power the chairs. The chairs are fine, but they were sent to the wrong people at the wrong time.

E4C: What has kept you awake at night?

AG: The thing that keeps me awake at night is the problem of global sustainability and that almost nobody seems to actually do much about it. We are heading for collapse in terms of planetary sustainability and we don’t seem to stop. We burden our ecosystems more and more at a faster rate, and we’ve exceeded the carrying capacity in some dimensions already. It worries me to think about what kind of world we are going to hand off to our children.

E4C: Five years from now, what improvements would you like to see in the technology that you and the people you work with use?

AG: I would like to see arsenic remediation technology in use, commercialized and out there in the world providing water to 100,000 to 1 million people every day. Affordable, commercially viable and financially viable. I would also like to see in five years out of my own research lab a way to do the same taking fluoride out of the water.

AG: I am pleased that the lemelson-MIT program recognizes this kind of work and tags it as a valuable contribution to make the world a better place. There are many awards out there for just being smart and creative, but the Lemelson award really addresses how can people help those who are impoverished and do that with the knowledge at our fingertips in the industrialized world. I am pleased that this whole topic is getting attention from something as prestigious as the Lemelson program.

It’s not the technology, it’s the people. That’s Manuel Wiechers’ advice for anyone launching a technology-based social startup. For a successful business, focus on the team, and for happy customers, be there with service and training. Mr. Wiechers heads Iluméxico, a rural solar energy venture that lights homes and powers schools among the 2.4 percent of Mexico’s population that does not have electricity access. To date, Iluméxico has installed nearly 13,000...