How Kibera is turning trash heaps into businesses 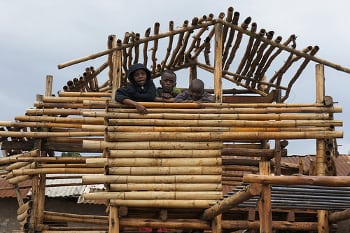 Residents of Kibera built this playground, one of the first in the region, on rehabilitated land that was formerly a dumping ground. Photo by Iana Aranda

Update – Feb. 13: Kounkuey is hiring engineers and accepting interns. See below for details.

In 2006, land around the river at the southern border of the Kenyan slum Kibera was a sodden trash heap. When it rained, streams of mud cut through the trash and the heap was prone to floods. Today, members of a women’s cooperative dry water hyacinth on the tin panels of a shade pavilion built where the dumping grounds once were. Community groups sell rainwater harvested from the pavilion’s roof, kale from a small garden and manure composted for fertilizer. A school and a church rent time in the building, there are park benches, chess tables, an office and a playground, reportedly the first built in Kibera.

To transform former dumping grounds into a public park and small businesses, the community partnered with a tiny group of predominately Kenyans and Americans called the Kounkuey Design Initiative. Six Harvard students founded the organization in 2006, and now KDI is turning unusable land into money makers in three sites in Kibera, and at sites in Haiti and the United States. 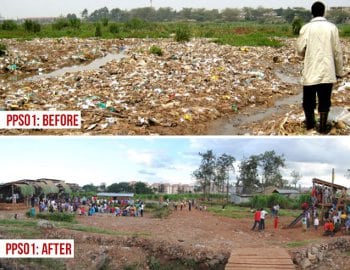 Before and after photos of the plot of land that residents of two villages in Kibera have improved. Photo courtesy of Joe Mulligan / Buro Happold / KDI

In Kibera, residents of the bordering villages Silanga and Soweto East formed work crews to clean the land. Then, leaning on technical support from engineers in KDI’s network, they stacked gabions – blocks of rock-filled wire mesh – to fortify the river bank against floods. Then they built the structures they needed for business. At two sites further north along the river, residents of other villages in Kibera are carrying out similar projects. At one, they have built a rarity in Kibera: a latrine block that is connected to the municipal sewer system. Until Jan. 9, the work is part of an exhibit at the Smithsonian, Cooper-Hewitt National Design Museum in New York called Design with the other 90%: CITIES.

The work in Kibera is a moving illustration of a community’s ability to work together to improve the land and their job prospects. Critics claim that the mistakes of top-down development models are glaring in Kibera, a slum that remains a slum though it is saturated with charitable organizations. Community-led programs such as KDI’s could be the antidote to that older style of foreign NGO paternalism. The solutions seem to be working.

“KDI does not suggest or design projects for the community,” Ibrahim Nyaburi, KDI’s community program manager, explained to E4C. “Once a possible site has been spotted by the chief scout, meetings are held with the community members who identify their most felt needs.”

Nyaburi, incidentally, is also the chief scout. Before taking the position, Nyaburi sold bananas and other groceries in Kibera while he completed a business management course. Now, he oversees the residents’ organizations that have created businesses from the new farms, toilets, buildings and other projects. Project proposals are a competitive process in which residents fill out applications and make a case for their solutions. “The best and deserving group is then identified,” Nyaburi says.

Then, a “rigorous” round of planning and design meetings begins between KDI and the winning residents’ group. “The community owns the projects and the process too,” Nyaburi says. Only when the plan is settled, permits acquired and agreements signed does KDI’s network of architects, engineers, administrators and so on go to work. “KDI is slowly becoming a household name due to its different approach in implementing its projects,” Nyaburi says. “People trust KDI and its team.”

Kibera is a globally infamous slum bordering Nairobi. Many of our readers know of it and some have worked there. Within its borders, thirteen villages of shanties cram into an area smaller than New York City’s Central Park. The population may be about 170,000 to 250,000, and other disputable estimates put the number at 1 million. There is little disagreement, however, that something has to change.

In 2009, the Kenyan government began relocating Kibera residents to new apartments on the outskirts of the slum, a process that officials said would take up to five years.

In the meantime, Kibera has the distinction of hosting about 200 (or many more than that, depending on the source) charitable organizations and development programs that shower about $25 million on the region every year, KDI reports. In spite of the largesse, there is only one toilet for every 35 residents, Nyaburi says, most people earn about $1 per day and unemployment is above 50%. Poverty seems entrenched.

“It’s a kind of scar on the face of Nairobi, bang there in the middle of the city that’s a massive base for NGOs,” says Joe Mulligan, a board member at KDI and an infrastructure consultant at the New York office of the engineering firm Buro Happold. “Working in Kibera can be overwhelming at times,” Mulligan says.

There is hope, though, and KDI’s before-and-after pictures of its work sites are evidence of it. “[The development sites] are little oases of productivity in the middle of a quite harsh environment,” Mulligan says.

Mulligan has posted a workspace at E4C to crowdsource solutions for stabilizing river banks at sites where KDI works. Please join it and post your ideas.

Update: KDI is hiring engineers and requesting applications for internships. Please see the organization’s jobs and internships page on its site for information. Some positions are not listed, including an opening for a civil or structural engineer to assess feasability and design new projects, and a watershed project engineer. Please contact KDI for updates.

How High Thresholds for Water Quality Can Hide Poor Service

Affordable and Scalable: Evaporative Cooling Can Fight Food Loss – Time for Communities and the Development Sector to Embrace It

Food loss due to lack of effective storage is a global problem. In Sub-Saharan Africa alone, approximately 23 percent of available food is lost or wasted, resulting in up to 15 percent less income for approximately 470 million farmers and others all along the value chain. Interest in evaporative cooling – an innovative yet old-school solution to the problem – is beginning to gain traction. The mechanics of the process...