Promoting toilets in communities where the alternative is squatting in the open should be an easy sell. So, why are the toilet-less of the developing world not buying it?

The approach taken by the Water, Sanitation and Hygiene (WASH) sector for the past few decades in dozens of countries in Asia, Africa and South America has been a one-two punch of teaching people about how “open defecation” is making them sick, and then building public latrine facilities capable of serving hundreds of users in a given community. In theory, this approach of scaring people to poop where they are told and then providing them with a collective place to do it should turn the tide of diarrheal disease and deliver a major victory in this relentless public health battle.

And yet, despite the construction of countless fortified concrete latrines coupled with earnest educational campaigns, hardly anything has changed. The grinding problem of poor sanitation goes on for 2.6 billion people the world over. Perhaps, we WASH professionals are failing because we are bad teachers and we need a better curriculum and more training. Or maybe the problem is that the students do not get enough time in the classroom. Or maybe, just maybe, we are promoting and building the wrong kind of toilets. 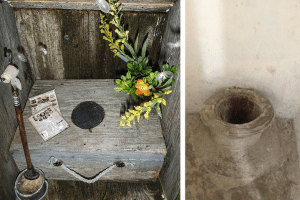 My money’s on that last one. Let’s face it: if given a choice between schlepping to a far-off public, and possibly dangerous, place to poop, versus one that is close to home, private, and safe, most people will choose the latter, and public education will not likely change their minds. Part of the problem is that the WASH sector gets hung up on the health part when it comes to toilets in the developing world. To be sure, health is the reason why we WASH professionals are in this business. But health, as it turns out, is not always the main reason why poor people want to have clean toilets. What people in developing countries want in a bathroom is pretty much exactly what we do.

This was confirmed by a study commissioned by the United Nations Development Programme titled Sanitation and Cleanliness for a Healthy Environment (pdf). Privacy was a top priority for people surveyed, but you wouldn’t know it from the door-less, public latrines located in high foot-traffic areas that regularly get constructed by non-governmental organizations. Going forward, it’s critical that toilets are private and have a door. Also, keeping the bathroom close to home will prevent the potential shame issues that are associated with doing your business in public spaces, especially among women and children.

Then there’s safety, which is directly correlated with the toilet’s proximity from the home. Without access to their own toilets, many women and girls become “prisoners of daylight,” daring to relieve themselves only under the cover of darkness. Night-time trips to fields or roadsides or far-flung public latrines, however, can put them at risk of physical attack and sexual violence. According to a 2010 Amnesty International report, a high number of women in slum areas in Kenya are raped when they resort to open defecation because they have no private sanitation facilities at home. 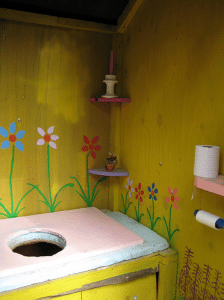 Comfort isn’t a top priority for WASH experts trying to solve a public health epidemic, but it turns out that it is extremely important for users. The UN study showed, not surprisingly, that people are more likely to use a toilet with a comfortable place to sit or squat and are much more likely to use a toilet that is close to home. Dark, uncomfortable latrines don’t fit the bill. Toilets that have natural light and adequate ventilation do. Like this one on the left.

Cleanliness goes hand-in-glove with comfort. If a toilet is dirty and smelly, no one will want to use it, and it may spread disease.

Last, and most elusive, is the issue of Respect. A well-kept, clean, comfortable, even beautiful toilet brings status and respect to its owner. Often this is a very important reason for people to spend the money and effort to build one. Free public toilets in the developing world go the way of the gas station toilet in the west: They get trashed. Always. Private ownership brings responsibility for upkeep, convenience of use and the well-earned pride of sharing a nice bathroom with house guests.

Looking at this list, it sounds nearly identical to what we look for here in the West, including the respect part. Who among us hasn’t been wowed by a wealthy friend’s spacious, gleaming white-tiled bathroom?

If well-intentioned WASH folks continue to build public toilets in places like Haiti that are windowless, smelly, scary concrete bomb shelters constructed to survive the apocalypse then I fear nothing will change in terms of public health. All the sanitation classes in the world or shaming tactics about public defecation would not convince me to go to the bathroom in a place like that. I, too, would sneak off into the woods to poo.

The WASH sector needs to start promoting privately owned and maintained toilets that are comfortable, safe, clean and bring dignity to their owners. If we make toilets pleasant spaces to visit, then guess what? People would use them.

Jason Kass, PE, LEED, is an environmental engineer, a member of Engineers Without Borders, New York Professionals Chapter, and the founder of Toilets for People.

Hardware startups go through dozens or even hundreds of design changes before a product hits a shelf. Making those changes on a screen rather than to foamcore or some other approximation simplifies the process. Digital 3D modelling tools are more powerful than ever and they are also more accessible. Computer-assisted-design programs such as Autodesk Inc.’s Inventor and Dassault Systèmes’s SolidWorks have evolved into “complete ‘inovation platforms’” that allow for product...