Young World Inventors: A Tanzanian Bike Mechanic’s Journey to MIT, the Smithsonian and His Own Tech Hub

[Updated January 2019] This article is a part of the Young World Inventors multimedia stories of inspirational technology innovators in Africa. Based in Boston, Young World Inventors documents Africa’s new stories of innovation by filming startups as they learn to survive and grow. There is lots of source material: Nearly two-thirds of the world’s fastest growing economies are in Africa, and 50 percent of its people are under 19 years old. Explore more of their stories on Facebook, and YouTube.

Bernard Kiwia was tired of walking across town to charge his cell phone. But what could he do? Tanzania is run by hydropower, and during droughts, which have come often in recent years, the “hydro” evaporates. In Arusha, near Mt. Kilimanjaro, the few who can afford them buy generators — think banks, stores—and to charge his cell phone, Kiwia’s only option was to walk to the nearest station.

As he walked alongside burros and vegetable stands on Arusha’s potholed dirt roads, Kiwia began to think of another solution. He imagined a bike-powered dynamo that might charge his cell phone using the energy of the pedaling wheel. Then, he built one.

From a bike shop to the Smithsonian


Working for an NGO that fixes and distributes used bikes in Arusha, he made repairs with scrap metal he collected at the local dump, and he earned a reputation as someone who could fix anything. But Kiwia was restless.

A trained electrician and vocational-school instructor, Kiwia comes from an enterprising Chaga family: His dad is an auto mechanic, his mom raises chickens, ducks and small livestock, and his sisters are tailors. The Chaga people are known in Kenya and Tanzania for their ingenuity and hard work. Kiwia’s sister reports that as a child he and a friend strung two match boxes together across a road as a prototype walkie-talkie, whispering into the boxes.

After building, testing and revising his bike-powered design, Kiwia’s chargers have sold around Africa in the thousands, and he also made a version for Tanzania’s ubiquitous motorcycle taxis. In late 2011, his design was displayed alongside other ingenious devices from developing regions in a Smithsonian Museum exhibit in New York City. 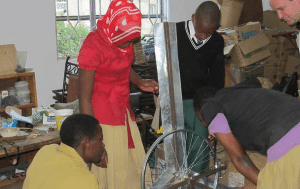 MIT and a Guatemalan technology transfer


But his trip from Arusha to America began years earlier, when Kiwia met Amy Smith, a mechanical engineer who founded the D-Lab courses at MIT — D for development, design and dissemination. As someone who teaches MIT students how to collaborate with villagers on mechanical solutions to local problems, she thought Kiwia would add value to an international gathering.

When Smith invited Kiwia to the first International Development Design Summit at MIT in the summer of 2007, Kiwia thought it must be a mistake. A Tanzanian bike mechanic invited to the Massachusetts Institute of Technology? Nonetheless, unflappable by nature, and as an enterprising Chaga, he was curious.

That first trip was a revelation for Kiwia. At Smith’s small gathering of international innovators, he was thoroughly inspired by Guatemalan inventor Carlos Marroquin, who demonstrated his Maya Pedal, a corn shelling machine attached to a wooden seat and powered by bicycle gear works.

“If Carlos can do it, why can’t I?” he remembers thinking. On his trip back to Arusha, he began to imagine all sorts of devices that could be powered by an ordinary bicycle. Within six months Kiwia had begun to develop a bicycle-powered water pump, an irrigation system, and a pedal-powered drill press. Kiwia was transformed, and he adopted a touch of evangelism, passing along the invention bug by helping others to imagine solutions to everyday challenges. 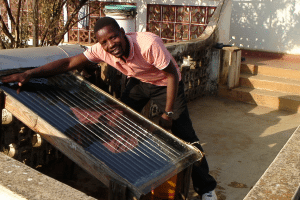 
At that same gathering, Kiwia met Jodie Wu, a recent MIT engineering grad who was developing a version of the Maya Pedal herself. Hers was a portable version of Marroquin’s machine that attached to an ordinary bicycle. The idea, inspired by her D-Lab work in Tanzania, was that maize buyers could move from village to village, shelling corn where it was grown to reduce the costs and labor involved in transporting it. Wu used her maize sheller to launch Global Cycle Solutions (GCS), a company that develops bicycle-powered products designed for people without access to electricity.

Kiwia had more interest in invention, prototyping and teaching than in sales and distribution, so he asked Wu to partner with him. Wu’s response was to appoint Kiwia as CTO of Global Cycle Solutions.

How to design in Tanzania


To design products that will work in Africa, “you need to know what people need,” Kiwia says now. “For me it’s easy because I live there, and I experience the same problems myself.” He starts with daily inconveniences, such as cold showers.“I decided that I would build a solar water heater to have access to warm water for showering,” Kiwia recalls.

At the center of his design were discarded fluorescent light bulbs, available by the dozens in Arusha’s scrap yards. As soon as I built one, neighbors started asking for one,” he says.

For those who don’t live in Tanzania, he suggests “a lot of research to understand people’s needs and desires. Better yet, travel to learn it yourself first-hand.”

For those who don’t live in Tanzania, Kiwia suggests a lot of research to understand people’s needs and desires. “Better yet, travel to learn it yourself first-hand.”

The birth of cool


As his fame has spread, students from MIT have come to learn and assist Bernard in product design, development, and dissemination. Bernard Kiwia is now the Technology Director and co-founder of a community innovation center called Accelerating Innovation and Social Entrepreneurship. It’s known as AISE, pronounced I-say, and means “cool!” in Swahili. Kiwia sees AISE as a place where village community members come together to develop technologies that can improve their lives.

AISE regularly holds “innovation workshops” like these at local schools to teach students how to think like an inventor, a rarity in a school system based on rote memorization.

More recently, Kiwia developed a bike-powered blender which he imagines as the centerpiece for low-tech juice bars. Kiwia showed his homemade bicycle-blender — bottle caps, spare bike parts, and cheap plastic jars,found at any “waka” convenience store—to a group of delighted children at St. Jude’s elementary school in Arusha. He hoped the idea might catch on among their relatives as a business model targeting neighbors and tourists.

For a small fee, AISE also opens its workshop doors to former students and innovation enthusiasts from abroad to incubate their design ideas. Kiwia’s ambition is to lead youth to launch their own businesses with devices they’ve created.

With rural Tanzanians as his primary market, Kiwia reliably designs his prototypes to be as affordable as possible and to improve the quality of life in developing communities. Still, he prefers perfecting his inventions to selling them as products, so he is content to continue his work with AISE and GSC: “I want to have people look at my inventions and say “Ah, AISE! — it’s good!”

A version of this article was first published at Medium. com as: Peddling Peddle Power: Bike-Powered Innovation in Africa.

This innovation is one of our Promising Prototypes of IEEE’s Global Humanitarian Technology Conference in Seattle Oct. 30 – Nov 1. For more in the series, please see below. Farmers in developing countries can make more money from a shrimp farm on a small plot of land than they can from growing rice. About three or four times as much. Since the mid 1980s, shrimp production has caught on in the...