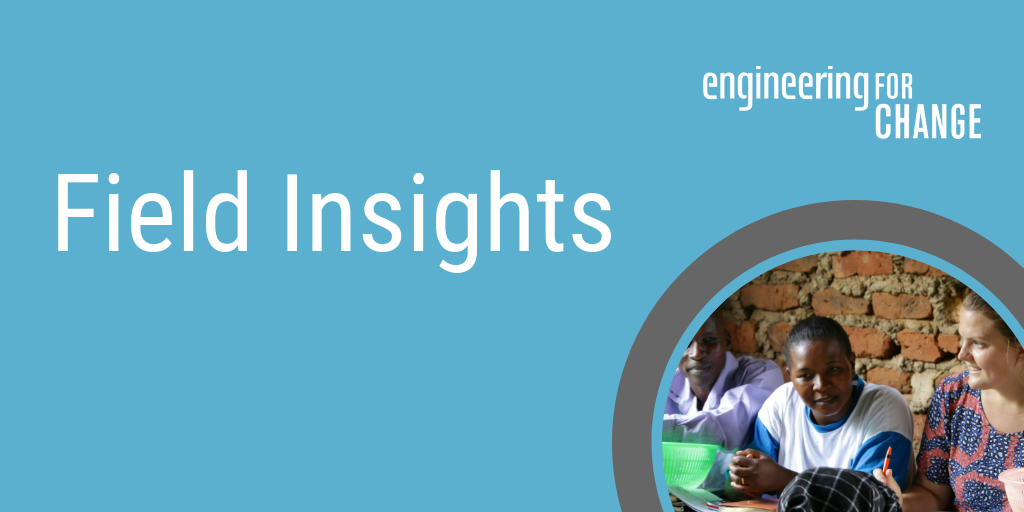 As former UN Secretary-General Ban Ki-moon said during an event by the Center for Global Development in 2012, “Energy is the golden thread that connects economic growth, social equity and environmental sustainability.” Having access to electricity and clean cooking methods serve as a critical catalyst for the development of health, housing, agriculture and education within communities living in conditions of general poverty or extreme poverty.

Starting in 2015, universal access to electricity and clean cooking methods became a commitment at an international level when the 193 Member States of the United Nations agreed as part of the Sustainable Development Goals in Goal 7 (guarantee the access to affordable, safe, sustainable and modern energy for all).

The majority of people who still do not have access to this basic service are either in geographically isolated areas where carrying the national electricity grid is very expensive or practically impossible, or in countries where slow economic growth has not allowed them to develop at a large scale a national electrical grid because of the monetary investment that this represents. For this reason, renewable energies such as wind energy and solar energy have been the focus of interest for the development of technologies that adapt to the needs of these populations. Currently, it is possible to find many companies, entrepreneurs, NGOs, among other entities, developing and implementing sustainable solutions that are having a significant presence in the goal of universal energy access.

Photovoltaic solar energy, specifically off-grid solar home systems, have represented an important solution for Africa and Asia in recent years. Statista estimates that sales of solar systems disconnected from the grid in Africa and Asia will increase from 13 million units in 2015 to 55 million units in 2020. Companies such as Greenlight Planet, Azuri Technologies, NRS International, Mobisol, M-Kopa and others have taken advantage of the decreasing costs of photovoltaic solar panels and cost efficient lighting technologies, thus achieving the dissemination of solar technology in thousands of homes in Africa and Asia.

The success of efforts to expand worldwide energy access could be attributed to the development of appropriate technologies, but were it not for the creative business models that have emerged to make accessible technologies, currently many households would not have at least lighting at night. By necessity, many of these companies have developed innovative financing models that mostly use mobile payment systems. The economic situation in many regions of Africa and Asia does not allow people to pay for conventional energy services, which is why companies that have implemented mobile payment are focusing on structuring payment plans that are affordable with respect to both expenses existing energy sources of households and family income.

The main financial model that has been presented as an affordable solution is the so-called Pay-As-You-Go (PAYGO). This financial strategy has allowed users to make daily, weekly or monthly payments via mobile banking. Payment models of companies such as M-Kopa, Mobisol and Azuri were developed considering expenditures at that time on energy from rural households such as the cost of kerosene lamps and the cost of cell phone charging. With these models users can have the opportunity to pay as little as 0.50 USD per day for the use of a Solar Home System (SHS). In this way, low-income households in peri-urban and rural areas have gained access to a technology previously only available to people with medium and high incomes. The SHS market in these regions was previously dominated by hire-purchase agreements, which had high interest rates and required high initial payments. This entailed that the credits for the purchase of a SHS were only within reach of users who had stable jobs, where the credit was deducted from their salaries.

The adoption of the PAYGO system for access to SHS requires the link between telecommunications, energy and mobile payment. Africa represents a success story for PAYG solar SHS, the sustainability of this industry in the region has been due to the fact that users have access to a mobile phone coverage through which they make mobile payments on their energy consumption. Although it is true that 600 million of the 1.06 billion that do not have access to electricity, are in the African region, the remaining population is in regions where the nexus is not fully developed.

The USAID Global Development Lab Center for Digital Development Strategy & Research has identified that in order to use a PAYGO model, five key elements related to the right environment must be considered by donors, investors and PAYGO providers to achieve its correct use: 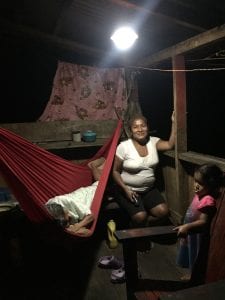 SOLUBRITE, located in Central America, is dedicated to distributing PAYGO solar solutions to people who are in the “last kilometer,” who live off-grid in rural areas. In Panama they have dedicated themselves to provide this solution to the indigenous people of the Ngöbe Bügle region. The Ngöbe Bügle region according to a survey carried out in 2017 by the National Institute of Statistics and Census of Panama, only has electricity coverage in 7.5% of their homes, while the Emberá and Guna Yala regions have coverage of 56.6% and 3.6%. These figures present a significant contrast with respect to the province of Panama where the coverage is 98.5%. In these regions, a similar gap can also be found between indigenous rural areas and urban areas with respect to mobile phone access, in the Ngöbe Bügle region less than 30% of the population has access to cell phone use in contrast to almost 90% in the province of Panama.

It is evident the reason why SOLUBRITE has found a market in Panama, however, the dissemination of PAYG solar technologies are facing the barrier of little access to mobile coverage and the lack of mobile banking services. SOLUBRITE has had to develop a different distribution and payment model so that the SHS they offer can reach their target users. The SHS they offer are primarily Sun King models from the company Greenlight Planet, which have a PAYG system. Due to the situation of access to cell phone use, SOLUBRITE uses what they call the “Last Kilometer”. The Last Kilometer is a network of agents residing in rural communities who are responsible for distributing the equipment, collecting the initial deposit and monthly payments, and delivering the codes to customers to unlock the system every month. In addition to the agents per community, there are regional supervisors who are responsible for giving the codes of each client to the agents and they are in charge of receiving the money they collect monthly to deposit it directly to the company. 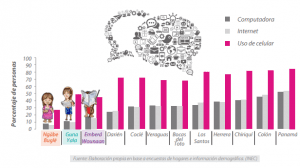 Sun King systems in regions such as Africa and Asia allow that through the PAYG their users pay as little as $0.25 USD per day by mobile payments. However, in Panama, due to the technological barrier, users are subject to making only monthly payments. Some of the communities of the Ngöbe Bügle region are long distances by boat, which complicates that the agents are making constant trips to the regional agents to pay and obtain the codes. This not only takes away the opportunity of flexible payments to users living in poverty, but also generates risks for the distribution company due to the need to manage cash.

PAYGO solar technology has proven itself as a promising solution at an international level, but for it to be adopted properly it is necessary to develop an enabling environment where mobile telephony coverage is broad and a mobile banking infrastructure is established. In this way, not only the distribution companies manage to obtain sustainability, but the users, in addition to obtaining the basic electricity service, manage to break the barrier of access to telecommunications and achieve financial inclusion.

The future of water treatment and sanitation may be on a schematic on a hard drive in Karl Linden’s lab at the University of Colorado in Boulder. The environmental engineering professor and his team develop the next generation of life-saving technology for developing countries and maybe everywhere else. In sanitation, Linden has led the development of the SolChar solar toilet that converts waste into biochar that can be safely applied...