A plan in need of a donor: Solar laptop charging stations for Haitian schools 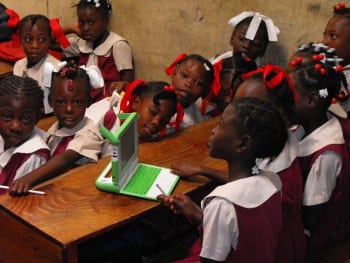 Update 8/2/2011: The students raised $25,000, enough money to outfit one of the Hatian schools with solar-powered laptop charging stations, which they are working now to install. “Thanks in most part to the publicity we received—that’s a big thanks to you, too!” Laura Hosman tells E4C. The team also received a grant of $10,000 from the Internet Society, and they will use the money in partnership with the San Francisco-based organization Inveneo to connect Lascahobas to a broadband network linking key points across country. Hosman writes about the broadband project here.

Two months before the earthquake in Haiti in January 2010, the One Laptop Per Child program distributed hundreds of its XO computers to children at two schools in a town called Lascahobas. The town is in Haiti’s central plateau, northeast of Port-au-Prince and about an hour’s drive west of the border with the Dominican Republic. When the quake struck, it knocked out the town’s power, and it hasn’t had reliable electricity since. The irony is that OLPC had chosen the spot for its dependable power flow so the laptops would have a place to charge.

Now, more than a year later, the computers are dead and OLPC is holding 11,000 new ones in reserve, waiting for the area to regain power.

With luck, and some financial generosity, the wait may not be much longer. Students at two universities, the University of Haiti and Illinois Institute of Technology, have a plan to put solar panels on the schools’ rooftops. If they can raise the money to demonstrate their solution at two schools, they think they can scale it up to take laptop charging stations to the region, and even the whole country.

“Everything about our project is designed to scale across Haiti and other countries,” says Laura Hosman a political science professor at IIT who heads the course working in Haiti.

Laptops and only laptops

The plan is simple. The stations will provide enough solar power to charge all of a school’s laptops, and nothing else.

To do that, the students first calculate how much power the schools will need. For a full charge, each laptop requires 25.5 watt hours. Assuming 5-6 hours of useable sunlight, a school with 350 children would need about seven 250W solar panels, the student teams figured.

Then, the team will rig the system to provide only direct current (DC). DC charges laptops, but not much else. That setup cuts costs by not providing alternating current (AC), and helps ensure that the power is used just for laptops. The installation could cost about $7000 per school. And if the laptop charging stations catch on, the costs could drop as the project scales up.

“With this project fully implemented, kids and teachers at Lascahobas won’t have to worry about power issues anymore. They will be able to explore this new way of learning with the XO,” Carl Lacrete, an undergraduate student at the University of Haiti, told E4C by email.

But first, they have to raise  money.

“I hate to admit it, but I’m starting to get anxious,” said Dhara Shah, one of 11 students in the IIT course and president of her school’s chapter of Engineers Without Borders. She and her classmates are trying to raise $37,000 by May of this year. That, Shah says, is a daunting number.

The IIT students have planned fundraisers at their school, approached educational organizations and applied for grants, but not with as much success as they would like. “Our biggest hope is in finding a solar-panel donor, someone who’s interested in having their name attached to the product,” Hosman says.

UPDATE 4/3/2011: The students have entered a fundraising challenge at Globalgiving.org. They are trying to raise $4000 from 50 donors during the month of April.

If the team can raise the money, the payoff could be in improved education for Haitian children. Students from both universities are working with school teachers in Lascahobas to make computer-friendly curricula. And they’re training the teachers to use an unfamiliar technology, passing on skills that they can teach to their students.

“These laptops are just one small step in improving the education of children in Haiti, giving them just one more tool to improve their quality of life,” says Jacob Ernst, an IIT undergraduate student.

Stores in Malawi and likely other developing countries carry defective and even fraudulent solar photovoltaic panels. In places where quality standards are not enforced or do not exist, stores and suppliers can sell faulty products to poorly informed consumers. Used solar panels, broken panels, poorly constructed panels and even fake panels with paper made to look like PV cells can have price tags that equal those of new panels in...