This solar water sterilizer treats 10 liters of water in two or more hours, depending on conditions.

The shortage of clean water in drought-afflicted Somalia and other developing countries may have a quick fix in solar sterilization jugs.

The Swedish company Solvatten has developed a user-friendly product that disinfects up to 10 liters of water in two or more hours, depending on conditions. The devices could serve in the emergency drought relief efforts in the Horn of Africa, as one of the device’s distributors, a US company called Higher Mind Technologies, proposes. 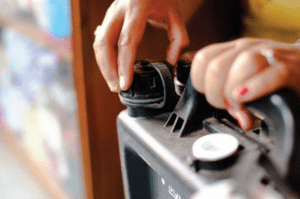 Not incidentally, Solvatten points out, the device also happens to reduce deforestation and improve indoor air quality. The jugs cut the need to boil untreated water. Since many rural Africans cook over indoor wood fires, solar sterilization can offset the amount of wood that families use, easing pressure on the forests and improving the air in the kitchen. For its forest-saving potential, the World Wildlife Fund praised Solvatten as one of the Climate Solvers in 2009.

To have an impact, however, many people must use the jugs regularly. This is how Solvatten’s jugs work, and how the company is trying to distribute them in rural, impoverished regions.

At its core, the device is a simple solar sterilizer. Its action mechanisms are heat and UV rays. Those are the same principles behind the Sodis method, which advises people to sterilize water with used clear plastic bottles. Just fill them and place them in the sun for a few hours. The Solvatten system has a few differences, though, not the least of which is its friendliness to the user.

Closed, the device looks like a black jerrycan with four nozzles. To fill it, a user pours up to 10 liters of water into the two entry nozzles, each of which is fitted with a simple filter. The filters catch sand and other large particles. Then the user opens the jug like a book, right down the middle.

Inside, clear plastic walls enclose the two halves. Placed in the sun, the jug’s clear plastic exposes microbes in the water to UV rays while the black plastic interior absorbs light and heats the water.

Users will know the water is ready to drink when they see a smiley face on the jug’s heat sensor. That takes some of the guessing out of the process. 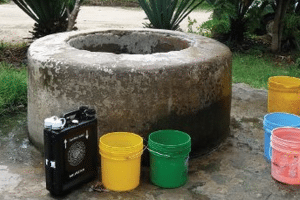 While living in Australia in the late 1990s, Petra Wadström, a Swedish artist and inventor, had the idea for the first Solvatten prototypes. “So much sunlight hits this continent but it’s not used, and I came up with an idea to capture some of this energy,” she wrote in a statement in the device’s training manual. “After many years of product development and invaluable experiences in Kenya and Nepal, Solvatten was born.”

The company completed pilot studies of its device in Kenya and Nepal last year, and is now developing a small web of distributors. Higher Mind Technologies has rights to sell the devices in Sudan, where it has made inroads with the government and aid groups. It has not yet begun to sell the device there, however. The company’s strategy is to sell the jugs to a buyer with deep enough pockets to buy in bulk.

Then, either the buyer or the distributor would hire local employees to disseminate the device and instruct people in its use. The price per unit fluctuates from roughly $200 to $250. That price may be a sticking point for some buyers, but, says Armen Miskovich, co-founder of Higher Mind, it reflects the cost of production, delivery and product support. Please the video and resources below for more information.

Swapping hard drives is a common exchange between humanitarian professionals working in remote regions. “Do you have any movies? Music?” When the professionals happen to be engineers or architects however, the conversation can quickly turn to work: “What about field manuals? Anything on post-earthquake reconstruction? Sanitation? Anything on septic construction?” Humanitarian and development professions have matured, and methods of design and construction in complex environments are now documented. Organizations ranging...