Richard Arwa, founder of CIST East Africa, holds a handful of water hyacinth next to the bioethanol he produces with it.

Bioethanol for Refugees: A Startup’s Plan for Weeding Lake Victoria

Looking out from the Kenyan shores of Lake Victoria, a green carpet of water hyacinth floats with the tides. The invasive weed clogs shorelines of Africa’s largest lake, preventing the passage of fishing vessels from the weed-choked bays to the deep water where they fish.

“Our business is greatly determined by how best we can access and navigate the waters of the lake,” says Kevin Ochieng, a 33-year-old part-time teacher and fisherman. “With this weed, we hardly have access to fishing grounds as well as beaches to offload our little catch.”

Mr. Ochieng owns fishing boats that crisscross the lake from Usenge Beach to Homa Bay. For years, the weed has critically affected his operations. Hyacinth is an aquatic floating plant native to South America that appeared on Lake Victoria in the 1990s. It now covers about 17,000 hectares on the Kenyan side of the lake. There may be some respite, however. 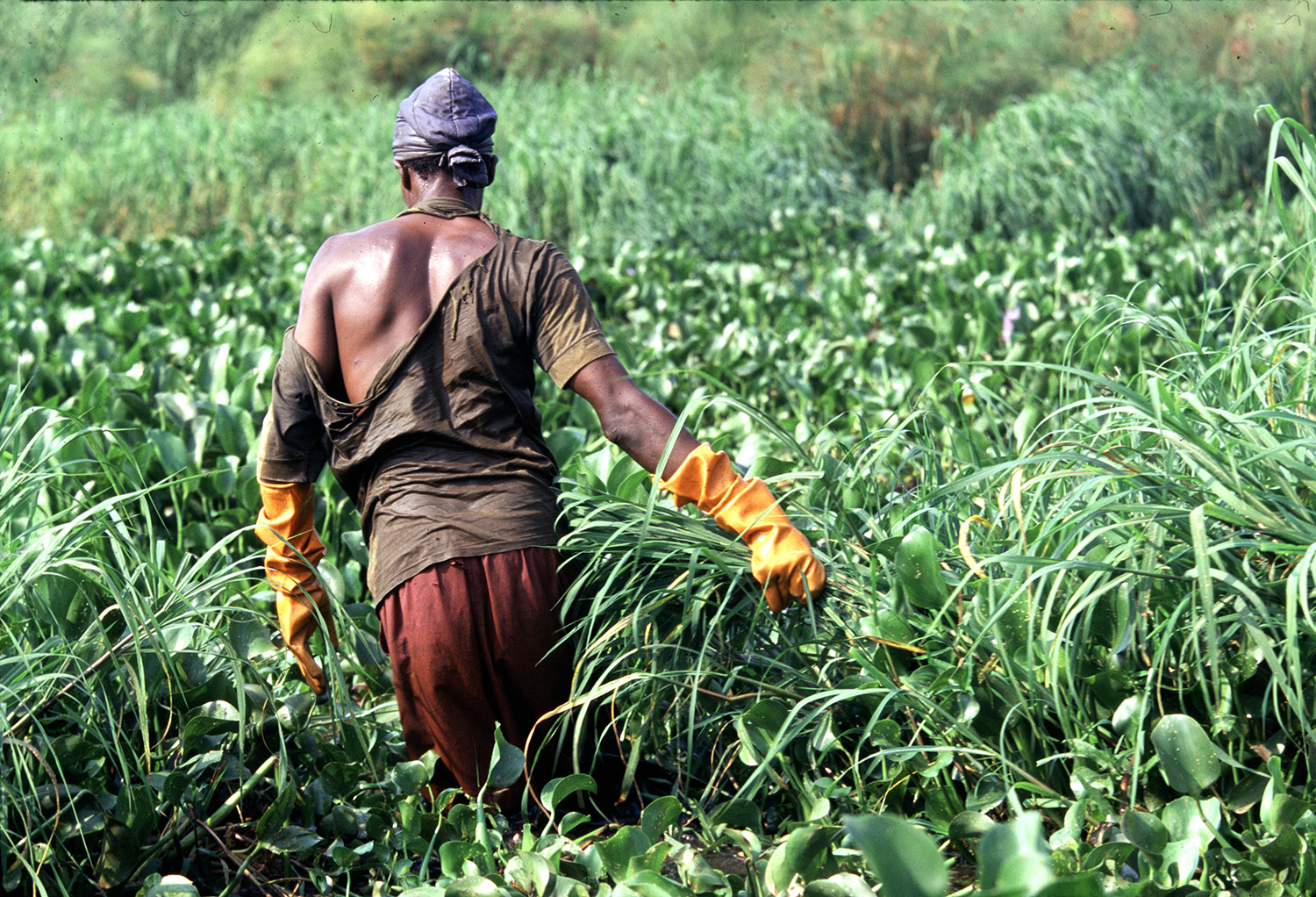 An energy social enterprise is keen to help, one truck at a time, by converting the aggressive water hyacinth into bio-ethanol that is sold as cooking fuel for refugees in Kenya.

CIST East Africa, based in the lakeside city of Kisumu, hires fishermen and their boats to harvest the weed from the landing bays the fishers use to access the lake, clearing paths to the deep waters where the fishing is best. Although limited in scope at the moment, the few cleared areas have seen a return of the fish. The startup has also been able to put fishermen to work who may otherwise have had little to do while the fish stock was reduced.

From harvest to ethanol

The motivation for the work was to clear the weed, but once the startup got into it, it became clear the weed could have an impact in the clean energy sector.

“We reduce energy poverty by providing clean, affordable, and sustainable household cooking fuel, and also provide jobs for youth and women, increasing their income and improving their social status in the community,” says CIST East Africa’s founder Richard Arwa, who has been working on household renewable energy technologies for the last seven years.

Mr. Arwa noted that, while the ethanol industry in Kenya and the East African region has existed for a while, the production of ethanol for household cooking is relatively new.

Just over half—50.38 percent—of water hyacinth is composed of cellulose, a key ingredient in the production of bioethanol. To turn the water hyacinth into ethanol, the startup scoops the weed manually from the lake and loads it into waiting trucks. At the factory, the weed goes through a series of procedures to separate compounds such as hemicellulose and lignin from the cellulose. The cellulose is made to react with water, undergoing a process called hydrolysis to extract fermentable sugars. Those sugars are then fermented, converted into ethanol and distilled to a high concentration.

From this process, CIST East Africa can achieve up to 94 percent pure ethanol. 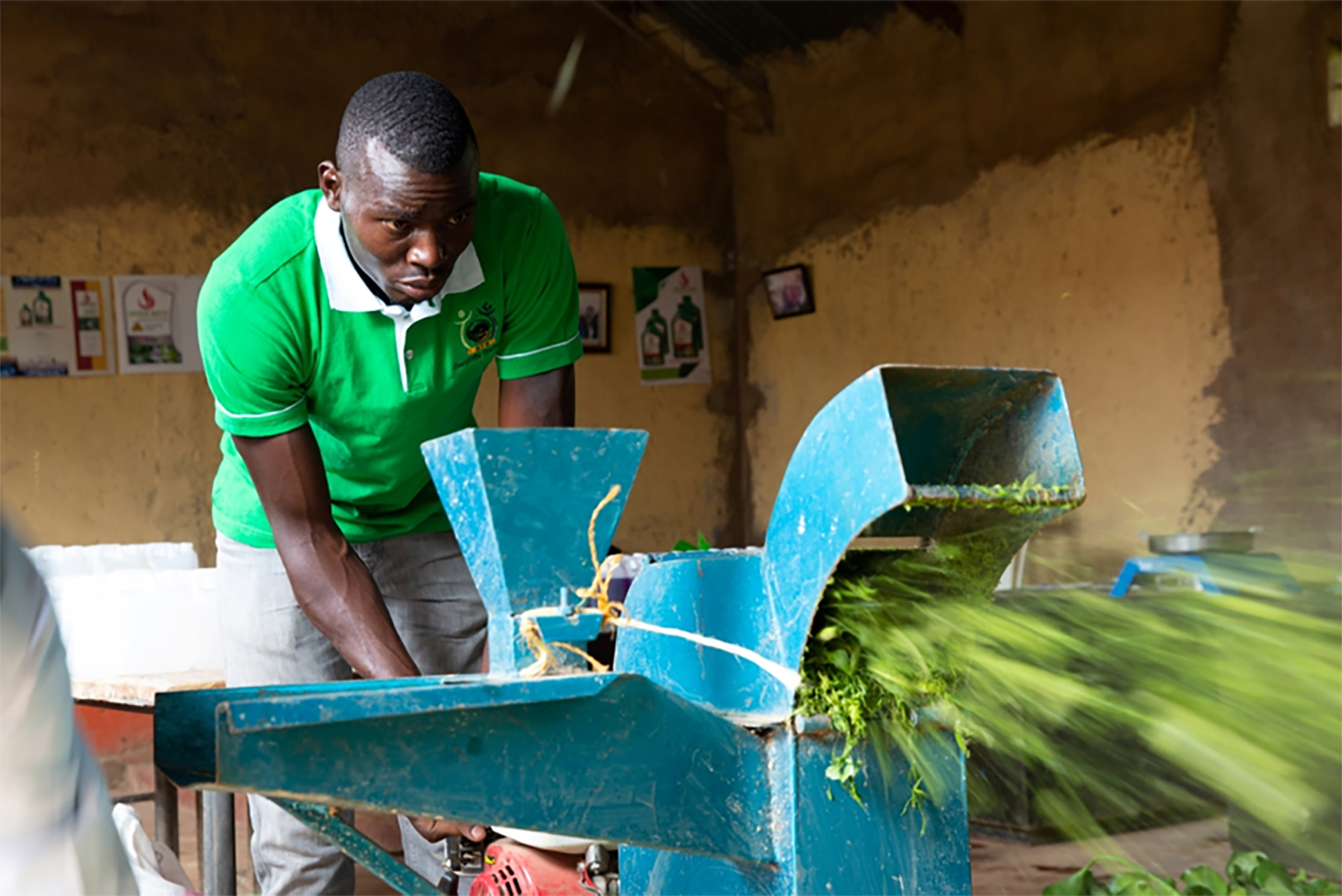 Shredding the water hyacinth is an early step in the production of bioethanol at the CIST East Africa workshop.

The ethanol is sold as cooking fuel, and, recently, as sanitizer. CIST East Africa added ethanol-based sanitizer to its product line in response to demand precipitated by the coronavirus pandemic.

“CIST does not only manufacture products which mitigate climate change and the spread of COVID-19, but also upholds the principle of the circular economy by making innovative products through use of waste materials,” Mr. Arwa says.

To complement its fuel, the company has also rolled out cooking stoves for low-income families. Dubbed Super Moto (Super Fire), the fuel has a high calorific value of 4.24 kcal/g enabling it to heat faster. By comparison, wood has a calorific value of 3.22 kcal/g. The ethanol is also cheaper compared to other commonly used fuels in Kenya, such as kerosene. And when it burns, ethanol emits a negligible amount of smoke.

A market in Kakuma Refugee Camp

The cooking fuel has been a hit in western Kenya, but it has also made a mark in the Kakuma Refugee Camp. Kenya hosts a large number of refugees, mainly drawn from neighboring Somalia and South Sudan.

Kakuma is home to 196,000 registered refugees and asylum seekers. The residents’ embrace of Super Moto fuel solves an energy problem, and it may also save the adjacent shrubland from deforestation as refugees have less need to produce wood charcoal or burn wood as fuel.

“While a robust humanitarian system exists to provide food, shelter, and medical assistance, the refugees in this camp lack access to clean cooking fuel. It has served as a good market for our fuel due to affordability and the clean nature of the fuel, making it a viable option for household cooking,” Mr. Arwa says.

Three billion people globally cook over smoky open fires or on stoves using kerosene, wood, charcoal, dung or coal, according to the World Health Organization. The practice leads to more than 4 million deaths annually, amounting to a higher mortality rate than malaria, HIV, and tuberculosis combined. Dirty cooking fuels also contribute to climate change, lead to the loss of economic opportunities, and they are a particular burden on the health and time of women.

Kenya has a budding ecosystem of domestic renewable energy technologies, including some that have gained international recognition, such as the clean cookstove Jikokoa. Bioethanol is now a part of that clean energy mix.

The fisherman Kevin Ochieng acknowledges that harvesting water hyacinth has been of help to the fishing community.

“This company uses our boats to scoop the weed before loading it to trucks. We lease our boats for this work and the fishing community also provides labor for the exercise. By the time they are done with a day clearing, there is a clear path that fishermen can use to go to the center of the lake. It is a win for fishermen,” he says.

Kimani Chege is the 2021 Editorial Fellow at Engineering for Change, a freelance journalist and a media trainer with DW Akademie, a branch of the German broadcaster Dutche Welle (DW), where he trains radio stations on financial management, new revenue streams and other topics. Previously, he was the coordinator of a science journalist association in Kenya.

Designed: This Air Conditioner for Homes and Offices Uses No Electricity

Evaporative coolers have been known to purveyors of low-cost, sustainable technologies for years. Without the need for electricity, these cold containers have kept produce fresh from farms to tables, protecting against post-harvest losses in the field and food spoilage in hot pantries worldwide. Now the concept has been applied to air conditioning. Manoj Patel Design Studio in Vadodara, Gujarat (India) has built evaporative air conditioners that can cool a room for...