Buckle up for fast-tracked science thanks to open-source hardware

Open-source scientific hardware is already here and growing rapidly. Researchers in every field have access to extremely low-cost high-grade scientific equipment, which can radically expand the quantity and quality of their experiments and engineering applications. The concept of open-source scientific hardware is catching on like wildfire all over the globe. I’ve documented the trend in the book “Open-Source Lab: How to Build Your Own Hardware and Reduce Research Costs.” and in Appropedia.org, which is a wiki for sharing open-source appropriate technology (OSAT). OSAT is a special class of open-source hardware that encompasses technologies as simple as the PET water bottles used in the SODIS method to purify drinking water with sunlight all the way up to large-scale solar photovoltaic arrays.

The open development method appears to work with all technologies. By sharing ideas for technology like this, not only can individuals help thousands of others with the same problem throughout the world they can also benefit from improvements that others make on their technology.

What happens if scientists and engineers begin to use Appropedia’s techniques on the most expensive and sophisticated research tools? With the rise of digital manufacturing and P2P share we are about to find out.

Groups including MOST at Michigan Tech, which I lead, Tekla Lab at the University of California, Berkeley, Sensorica in Canada and Cambridge’s OpenLabTools routinely use, develop and share free and open source hardware (FOSH) for scientific equipment – everything from rapid prototyping systems to analytical equipment – to allow others to innovate rapidly as well. Scientists are primarily doing this to save money on notoriously overpriced lab tools. For example, the University of Cambridge created an $800 open-source microscope to replace expensive high end systems ranging from $15,000 to $80,000. We found when developing an open-source optics library of 3-D printed components we could save over 97%, with some components representing only 1% of the current commercial investment for optical products of similar function. As our open-source hardware printed components were custom, they were actually BETTER than what was commercially available – all for pennies on the dollar. 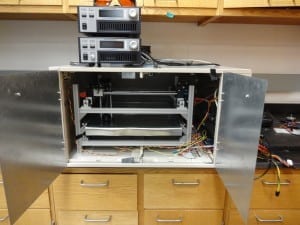 We have also found enormous time savings in developing new equipment in my lab by using designs that others have made and adapting them for our needs. For example, we altered a design to make a laser polymer welder for making heat-exchanger prototypes and saved our lab tens of thousands of dollars in rapid prototyping costs as we can now literally make heat exchangers from plastic garbage bags. As we published all of the plans for our welding systems, now every scientist and engineer that is doing similar work can take advantage of the same savings.

Make no mistake, in the context of FOSH scientific equipment, inexpensive does not mean cheap. To bring the concepts of OSAT and FOSH science together, we recently completed an open- source mobile water quality testing platform, based on an open-source desktop colorimeter. We adapted it to be 3-D printed, battery powered it and expanded its ability to include nephelometry (measurement of turbidity). In shoot outs with commercial systems we found comparable accuracy and reproducibility for about one tenth of the cost. 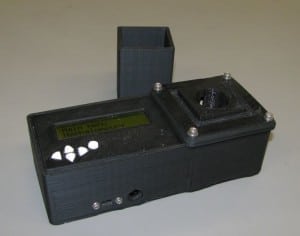 Lower prices, more rapid innovation cycles, and reduced time investment are great, but the primary advantages of open source hardware are customization and control. Rather than rely on what is on the shelf (even those large virtual shelves on Amazon, Ebay and LabX), scientists can create scientific instruments that meet your exact needs and specifications, which is particularly helpful to those on the bleeding edge who need never-before-seen equipment to make the next great discovery.

There is a deeper benefit to developing open-source hardware, which the Appropedia community is already well familiar with: simply good karma. People from all over the world have made suggestions and built upon the scientific hardware our group has shared, which, in turn, makes better equipment for us. It is a little bit like having a global R&D firm with thousands of engineers all working for our lab. The more useful the tools that we share are to the global community, the more help we receive. Even if labs are not specialists in hardware design, they can adapt existing tools to their experiments and share their adaptations, which could be very useful to the rest of us. In turn we will pay you back with improvements on your specific application to improve your future experiments.

Options for professionals and amateurs

There is already a dizzying array of FOSH scientific tools and it is expanding daily. If you are a scientist or engineer you should consider using and sharing FOSH tools for your work as it can lead to more rapid scientific progress in both your lab and the scientific community at large (and to be self-serving it will also result in more citations as others can more easily replicate your work). Funding agencies are taking note and beginning to fund FOSH research. Why? Every dollar they invest in making a scientific tool available for their research communities can save them millions down the line as their scientists make their own for much lower costs. The NIH has even started their own 3D print design repository, which has begun to house custom labware.

FOSH scientific tools are not only for the scientists at MIT and similar organizations. They are freely available on the web. You can use them yourself even if you are an amateur scientist, a student, or if you are just curious about something in your life like the quality of water you are drinking. The potential for FOSH scientific tools in the classroom is particularly encouraging. Students can do real science with real tools rather than replicating old cookie-cutter labs. They can make (or even help customize) some of the equipment they use. It is much easier to transmit the excitement of scientific discovery to students if they actually get to make new discoveries themselves. This is all possible because of the aggressive cost savings brought on by FOSH. In one set of physics labs we could provide all the tools necessary in a $15,000 lab for only $500.

Each student that learns more science because of access to real equipment will be a better scientist or engineer and make more discoveries faster. This effect is particularly effective in areas with underfunded science and engineering programs (such as amny of those in the developing world). Young engineers and scientists will have less expenses associated with equipment so they can buy more tools or hire more graduate students to do more experiments and make more FOSH. All of this is following a positive feed back loop and accelerating scientific progress.

The application of FOSH to science is just getting started. What happens when an entire generation grows up with access to high-end scientific research tools and a vibrant sharing culture continually improving, adapting and evolving ever more complex and powerful instruments? I am not sure, but it is going to be an exciting ride. Buckle up!