How Buildings in Johannesburg Could Benefit from Green Roofs

There are about 500,000 square metres of green space in Chicago in the United States. Many of these are visible, not on the ground, but on building roofs across the city. Green roofs can be seen in a number of other cities around the world.

Green roofs are usually installed on flat roofs with vegetation planted in a growing medium on top of waterproofing, root barrier and cuspate sheeting. The sheeting retains moisture in between rainfall events or manual watering.

Research suggests that these roofs have a number of advantages. These include rainfall management by absorbing much of the rainwater for vegetation growth and the enhancement of biodiversity. They’re also a social amenity as a visual relief to the dominant concrete surfaces and some studies suggest there are psychological benefits for people overlooking such roofs. Green roofs are also credited with attenuating extreme temperatures by keeping the rooms below the roof cool in summer and warm in winter.

We set out to study what benefits green roofs might bring to Johannesburg, a city in South Africa’s interior. There are a few buildings with green roofs in the inner city, but these are not common. Johannesburg’s climate – with high day time temperatures in summer and winter, as well as a distinctly seasonal summer rainfall – has not been previously researched to see whether its buildings might benefit from green roofs.

In our research, we focused on the improvement of comfort levels of rooms directly below the roofs, since they are thought to act as insulators. We also explored the temperature moderation on the outer face of the roof. This could play a role in reducing the Urban Heat Island effect, a phenomenon that creates a bubble of warm air over a city that attracts rainfall over the city at the expense of the surrounding countryside.

We built three scale models: one of a vegetated roof, the other of a soil roof devoid of planting, and the third of a tile roof. These were fitted with heat sensors on the exterior and interior, which allowed us to explore the models’ thermal performance. 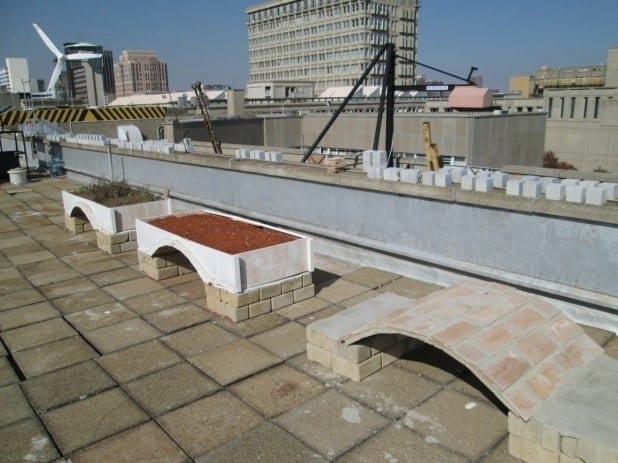 The scale models atop a building in Johannesburg. Photo: Anne Fitchett

The plain tiled roof showed the greatest variation in temperature, both in the interior and on the external face.

The interior under the green roof had a minimal improvement on ambient temperatures. But it was well below the recommended minimum interior temperature of 19 °C promoted by national building standards.

South Africa is a country that has a great need for affordable building. The inhabitants of these low-cost housing projects have few resources with which to improve their indoor climate, such as space heating and cooling. Moreover, most of South Africa’s energy is from non-renewable sources.

So it is important, from both an ecological and socio-economic stance, to develop low-cost housing solutions that are inherently comfortable and environmentally sustainable. The results of this study indicate that the sue of vegetated roofs can provide one approach to affordable housing that mitigates the extremes of ambient temperature while offering the many other benefits claimed for green roofs.

Privashen Govender and Priya Vallabh, students in the Faculty of Engineering and the Built Environment at the University of the Witwatersrand, contributed to this article and the research it is based on.

Human-centered design is a maturing movement with real-world evidence to back its theories. Its successes have been so conclusive that the broader design community worldwide has adopted many human-centered practices, forcing a shift in the designer’s role. Two stories from one designer’s career illustrate the work and evolving job description of the human-centered designer in action. Design has ceased to be just design at this point in Akshay Roongta’s career....