If anyone is keeping score, machines might have beat plants at their own game. By at least one measure, solar photovoltaic panels can convert sunlight to storable energy more efficiently than natural photosynthesis. And machines in the lab are quickly encroaching on other advantages that plants have long held uncontested. Self repair, for example, might not remain unique to plants for long. Same goes for CO2 absorption from the air. Notably, machines even have the ability to use sunlight to convert water into hydrogen and oxygen.

There’s at least one area, however, where the relationship between plants and panels is not so much competitive as it is mutually beneficial. 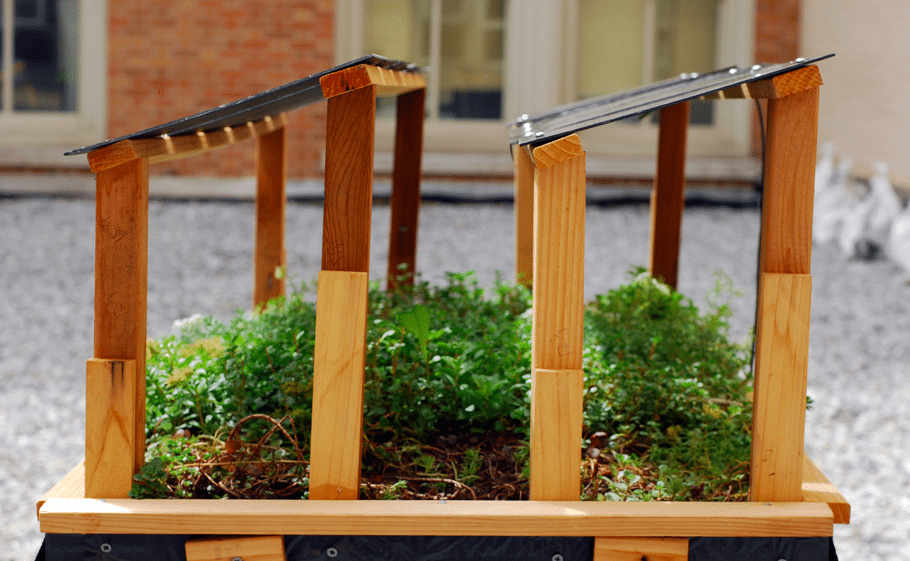 This model of a roof is planted in sedum under the shade of solar panels. Photo credit: Brooklyn Botanic Garden /via Nathaniel Wight’s blog

On a roof, plants can improve the efficiency of solar panels, and the panels, in turn, can shade the plants. In one experiment underway now, the efficiency boost is about three percent. That’s the figure that students at the Bronx Design and Construction Academy, a vocational high school in the Bronx borough of New York City, have calculated from their roof-top experiment, on which we reported last year.

The students in Nathaniel Wight’s science classes mounted scale models of PV arrays over beds of succulents. They also mixed in other models of test arrangements that included panels and no green roof, a green roof and no panels and an unmodified roof as a control. It turns out that green roofs and solar panels are iconic green technologies that also happen to complement each other.

“You usually wouldn’t see those together, but we did it, and we found out that the green roof cools down the solar panel and increases the efficiency of it,” Elton Hollingsworth, a ninth grader who specializes in pre-engineering architecture at the academy, told E4C.

“The solar panel provides shade, which creates more options for the plants,” Hollingsworth says. The shade is a stand-in for a level of vegetation in a layered forest canopy, he explains.

Hollingsworth and his classmate Noel Cruz, who studies architectural drafting, presented the preliminary results at the World Renewable Energy Forum held in Denver, Colo. May 13-17. 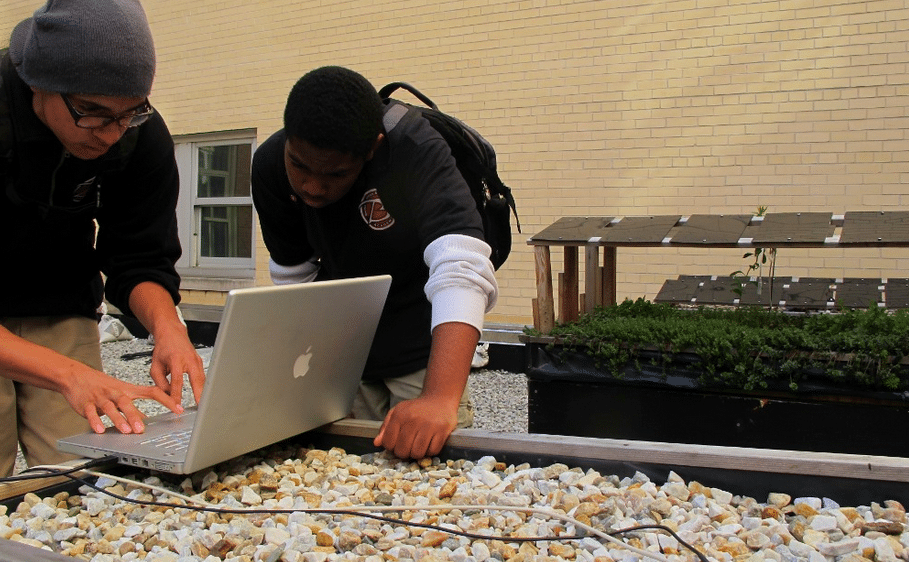 Incidentally, these two ninth graders gave us a proper lesson in integrated green roof technologies. And they reportedly did the same when they were in front of a room of international experts at the forum in May. Their contribution to science and their poise in explaining it have cemented our fan status. The school and Wight’s program, which he carries out in league with researchers at Columbia University, are doing some things right.

The next step, the students say, is to build full-scale models to test the effect of integrated plants and panels in a more true-to-life situation. Wight is seeking donations and grants to make that happen. And the students may have drummed up some interest at the forum, they say.

After hurricanes Irma and Maria tore through the Caribbean in 2017, devastating dozens of islands – including billionaire Richard Branson’s private isle, Necker Island – Branson called for a “Caribbean Marshall Plan.” He wanted world powers and global financial institutions to unite to protect the Caribbean against the effects of climate change. That hasn’t happened. So Branson and his government partners from 27 Caribbean countries hope that his celebrity, connections...