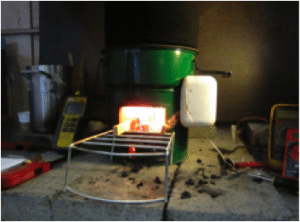 A new forced-air stove design intended to make clean stoves burn even cleaner could double as a wood-powered electricity generator in the home. The generator may be the only means of charging cell phones and operating radios in homes that need clean cook stoves most.

The device is a fan that attaches to the side of a “Rocket Stove,” one of the most widely distributed clean-burning stoves in the world. With the fan attached, the Rocket becomes a forced-air stove that mixes the smoke back into the flame to burn away soot.

On their own, Rocket Stoves reduce fuel use by 40-50% and burn about 50-75% cleaner. With the fan, they burn 95% cleaner. That’s according to lab tests by Biolite, a stove-technology development organization, in partnership with Approvecho Research Center, which designed and helped distribute its Rocket Stoves since the 1980s.

To power the fans, the designers considered energy sources such as batteries, solar power, or simply a wall outlet, but those options either added to the cost or just seemed impractical. Rather than require cooks to pay for electricity, the design team figured that the stove should generate its own using a thermoelectric generator.

“A copper rod inside harnesses enough energy from the flame to turn a fan,” explains Benjamin West, who heads StoveTec, a distribution partner of Approvecho. Through the cogeneration of heat and electricity, the stove can power its own fan, or any other small device. “You can basically charge your cell phone by cooking,” he said in a presentation at the 2010 World Science Festival in New York City. Biolite conducted field tests in Guatemala this year, and StoveTec plans to begin distribution early next year.

StoveTec calls itself a not-just-for-profit organization, which means it sells Rocket Stoves at affordable rates. All of its profits are reinvested in its mission, outfitting the world’s kitchens with clean stoves.

In the past two years, the organization has shipped more than 70,000 stoves to dozens of developing countries. Its model is simple: StoveTec manufactures its stoves and ships them abroad to retailers. The retailers buy them and sell them, often door-to-door, at an agreed-upon markup. West said that the company hasn’t yet worked out the logistics of local manufacture.

Stoves save lives and trees

Clean-burning stoves have conserved wood, reduced deforestation, and improved indoor air quality in homes in developing nations for decades. Members of Engineering for Change have probably heard of the benefits of such stoves ad nauseum, but they can hardly be overstated.

Kitchens: a leading cause of global warming

Soot, also called black carbon, comes in second to carbon dioxide as a leading contributor to global warming. When it’s in the atmosphere, it absorbs solar radiation and warms the air. Surprisingly, it may have as much as 60% of the warming effect of CO2, according to research by Veerabhadran Ramanathan a professor of climate science at the Scripps Institute of Oceanography. And most of the world’s soot now comes from the developing world.

Filters scrub soot from power plants and tail pipes in developed countries. About 65% of the world’s atmospheric soot is spewed from burning biomass and biofuel. Fossil fuels account for the rest. That’s according to a study by Tami Bond, a civil and environmental engineering professor at the University of Illinois, Urbana-Champaign. She also found that in the 1960s, there was a geographic shift in the production of soot. Before then, most of it came from developed nations, but since then, most of it comes from the tropics.

Indoor smoke is a main ingredient in atmospheric brown clouds that cover most of India and the Indian Ocean, Ramanathan points out in a white paper for Project Surya. The clouds reduce sunlight on the ground and heat the atmosphere, he wrote. Project Surya is an experiment that will provide clean stoves and solar power to Indian homes to record the environmental and health impacts of the change.

A recipe for making Boat Trip Stew on the Rocket Stove

10 Solar Cookers That Work at Night

The solar cooker is finally getting a practical overhaul. With few exceptions, solar cooking has been a disaster that happens again and again to well-meaning people in developed countries. It is such a clean, shiny idea that feels like the future until you actually build it. Then its flaws jump out. It only works for a few hours in the middle of a sunny day, but not at night or...