Two organizations are taking two very different approaches to managing the growing mountain of waste generated in the developing world. I present them here to inspire new waste management solutions and ideas to solve the global waste challenge.

Three billion people (40 percent of world’s population) do not have access to safe waste disposal facilities and two billion do not even receive basic trash pick-ups, according to the UN Environment Programme.

Waste which is not collected or disposed of safely is jeopardizing public health, degrading quality of life, and polluting environmental resources. Developing countries face this situation even though they consume less and generate less waste than developed countries. As these countries develop they will generate more waste. Waste can be an ever-increasing problem, but it is also an opportunity. As people come out of poverty, demand for waste management solutions and the ability to pay for them increase simultaneously.

Waste will be a major global challenge for our generation and we can solve it through innovation and leadership. Innovation and leadership can arise from every part of the society and from anyone, wherever they are in the world. Following are two organizations that are improving lives in their communities by solving their waste management needs.

A private fleet of bicycling recyclers

Only 40 percent of waste is collected in Lagos, which has a population of nearly 20 million. The rest of the waste and recyclables end up on the streets where they eventually clog sewers and cause flooding and spread disease. The narrow streets and underdeveloped roads in densely populated parts of the city make it difficult to use trucks to collect waste. On the other hand, the country’s recyclers have limited access to recyclables.

One of Wecyclers’ waste management solutions is a fleet of three-wheeled bicycles with tall chutes. They go around Lagos collecting recyclables and rewarding households that provide materials with points through an SMS-based system. The bicycles can easily pass through narrow streets, and families can redeem points for groceries, mobile services or other household items as incentives to participate.

Last year, Bilikiss Adebiyi, a co-founder of Wecyclers, told me that it was difficult to get people to participate initially. But, once they saw improvement in their surroundings and children’s health, getting people to enroll for their service has become easier. 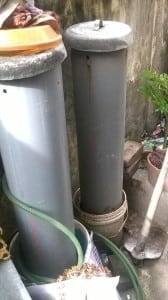 Composting made easy with coconut briquettes

Another organization is making it possible for families to skip the grocery store altogether and grow their own vegetables with compost that they make at home. A startup called Haritha Gramam (no Web site), with the help of an NGO called Thanal, has made this possible for nearly 3000 households in Thiruvananthapuram, India.

Developing countries like India are urbanizing rapidly. That growth severely stresses infrastructure and makes the need for waste management solutions critical. Thiruvnanathapuram’s waste used to be sent to a dumpsite near a village, where it caused respiratory illness and infection. The villagers went on a hunger strike and carried out demonstrations to get the dumpsite closed. With no place to dump, rotting garbage piled up on the streets of Thiruvananthapuram. The garbage was openly burned to avoid piling up higher. Other methods of handling the waste were difficult because the residents of Thiruvananthapuram were mixing organic and inorganic waste. Out of the few options available to manage waste at such a scale, composting mixed waste is gaining momentum in India. However, compost generated from mixed waste is of low quality and contains heavy metals, which could enter the food chain.

Haritha Gramam  is solving this problem with briquettes. Two features distinguish Thiruvananthapuram; most households have space for growing plants, and the region has one of the most educated populations in the country. Haritha Gramam leveraged these features by providing briquettes made of coconut fiber laced with a bacterial culture. The bacterial culture activates when wet organic waste is added, converting the waste into a rich compost. Remaining waste from households, which is mostly recyclables, are easily collected and recycled. Haritha Gramam also provides gardening services to encourage people to use this compost in their households.

A dialog for the latest thinking on waste

As more people realize the urgency of the global waste problem, there will be more innovators and leaders worldwide ready to solve it. And remember, innovation and leadership can arise from every part of the society. We believe that anyone working with waste, wherever they are in the world, deserves access to the latest thinking, enlightening case studies, and the sheer wealth of experience that others have. This is why we’re organizing the 2016 Global Dialogue on Waste. You can take part by starting at our site and join in on Twitter @bewastewise or by using #wastedialog.

Ranjith Annepu is a co-founder Waste Wise and an international waste management consultant. He helps a range of organizations and individuals find solutions to and through waste. His work has been cited by media and academia and used as reading material in universities.

How the world’s farmers do their work varies about as much as the types of crops and the countries where they’re growing. This informative little chart shows the different ways that small-plot farmers use machines and animals to grow, harvest and create service jobs. Roving entrepreneurs in China hire out their mechanized harvesting services, for example, while small family-run farms in Bangladesh own their own extremely low-cost pumps, tillers and...