As the first sun rays cross the Indian Ocean and hit the streets of Maputo, waste collectors begin their work in the Mozambican capital. The city is improving its recycling and waste collection systems through a mix of technological innovation and sheer determination. The Mozambican Recycling Association (AMOR, which means love in Portuguese) has established waste collection centers, called “Ecopoints,” all over town. To complement the service, the municipality has launched a mobile app called MOPA that citizens can use to report waste problems.

With increasing urbanization, waste management has become one of the major global sustainability challenges.

Waste thrown onto the streets, plastic bags blocking gutters, and the smell of burned waste in the mornings are common sights and odors in the Global South. Finding a waste bin can be a real challenge and dumps are growing. With increasing urbanization, the world is seeking waste management solutions to address a major global sustainability challenge.

Maputo has addressed the waste management problem using a combination of private and public initiatives. I had the chance to talk to Stephane Temperman, CEO and founder of AMOR, which is dedicated to the improvement of recycling services, environmental education and legal frameworks in Maputo and other towns in Mozambique. The organization has roughly 60 direct employees and its recycling center supports 1500 families in Maputo and Matola, the closest town. Mr. Temperman founded AMOR in 2008 after spending the previous 15 years in humanitarian crisis response, he says. 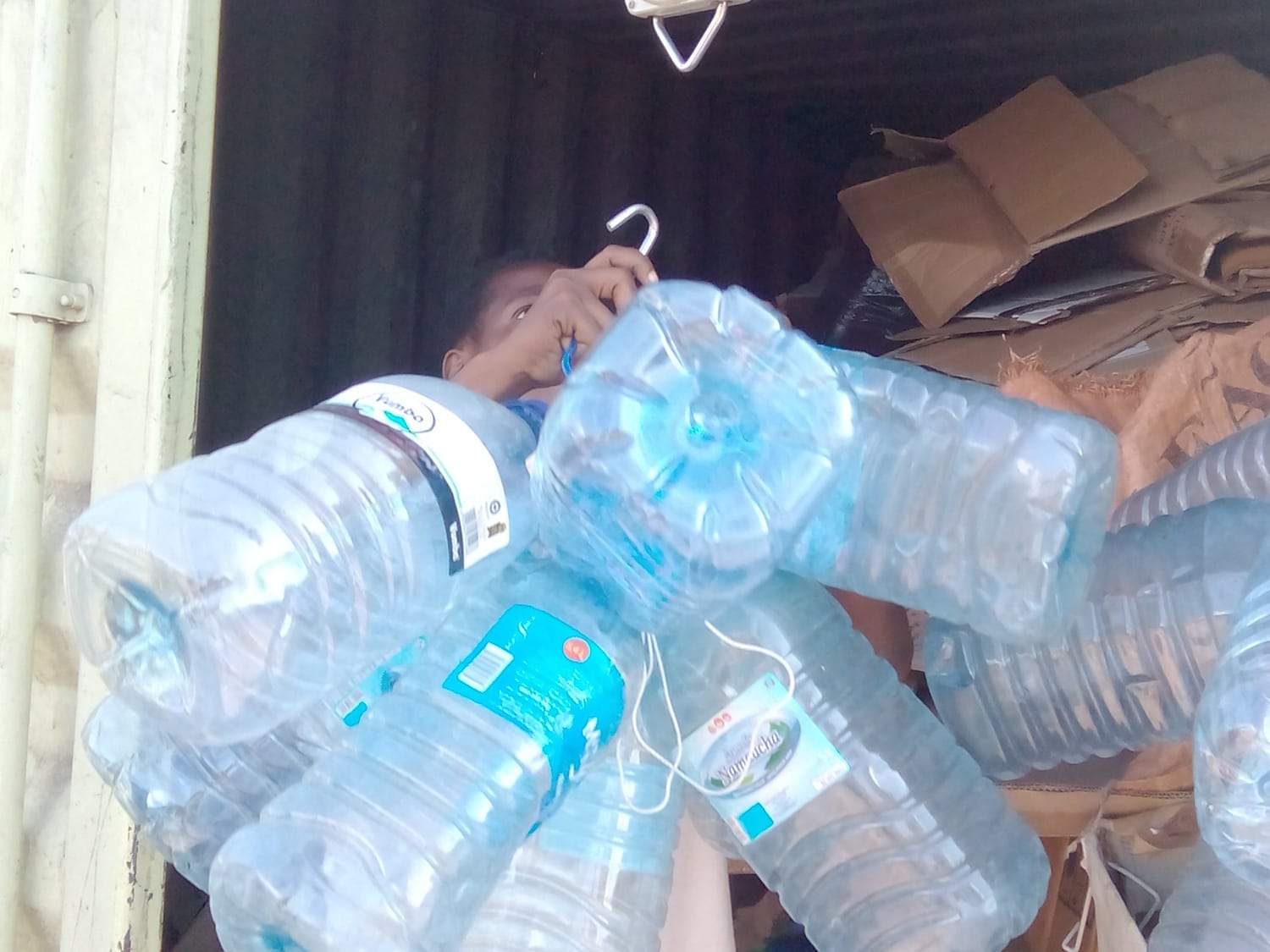 “I wanted to work more with the development phase rather than emergency. I had also gotten a bit tired of the inefficiency amongst many NGOs and wanted to create something that could have a long-lasting impact,” Mr. Temperman says. “The main idea with AMOR is that through environmental improvement we create thousands of jobs. You get the biggest social impact when you create decent jobs, so we use recycling in the fight against poverty. We are focusing on the bottom of the pyramid, creating links between waste pickers and the market. By working with recycling through the value chain, increasing awareness and improving the legal frameworks for recycling, we aim to improve both living conditions and the environment.”

“In the start, no one believed we could go to such a poor country as Mozambique and make recycling work.”

AMOR has set up Ecopoints in Maputo and other towns in Mozambique. Waste pickers and inhabitants bring their waste to the Ecopoint and get paid according to weight and type of material. AMOR is also supporting a small company using tricycles to pick up waste from clients and bringing it to Ecopoints. The Ecopoints then sell the waste to plastic and cardboard companies that in this way get direct access to feedstock. Each Ecopoint has an Ecopoint manager. The majority of these Ecopoint managers are a part of the Xidzuki Association of Women with HIV, one of AMORs partners. In addition to supporting waste pickers this collaboration is another example of AMORs contribution to strengthening marginalized groups in society.

Sustainable business models and support for entrepreneurs is key to AMOR. Mr. Temperman tells me that he wanted to create a company at first but it was hard to get startup capital from donors, so he created an association instead.

“It is much better to have local entrepreneurs doing the pickups and us focusing on supporting them and improving their possibilities to have successful businesses by offering environmental education at schools and affecting policy makers to take good decisions,” Mr. Temperman says.

AMOR’s business model seems to offer decent income to entrepreneurs. Mr. Temperman tells the story of a woman who was happy with her work collecting recyclables. She earned more money than at her previous job and could afford to send her children to school and leave her husband who was not treating her well.

An environmental education from early childhood

In the entrance of the AMOR office there is a table filled with products made of recycled materials, upcycled to something else. I see wallets, baskets, carpets, and other products. Deonisio Reis Vasconce los Ussaca, project assistant and head of educational activities at AMOR, explains how they were made. We sit down for a talk and he tells me more about school visits and information campaigns.

“Many trucks go to the north with equipment and goods but come back empty. Our idea is that they could bring back recyclable materials and waste.”

“We visit the five secondary schools we are cooperating with once a week to teach the students about recycling and environmental concerns,” Mr. Vasconce says. “We do this through workshops, direct teaching and direct implementation of recycling at the school. For example, we let the children make small wallets from old milk packages and inform them about why it is important to take care of nature. We also have a recycling station at the school where the children can leave waste. The recycling stations are colorful, with each bucket representing paper, plastic, metal or organic waste. To teach the children that waste is valuable they get two Metical (USD $0.03) per kilogram of waste they bring. This is less than what you get at an Ecopoint, but for educative purposes and children it is a reasonable amount here.”

AMOR’s environmental education starts at an early age, but the association also offers information to adults.

“In Vilanculos (a coastal town in central Mozambique) we inform about the negative effects of deforestation and teach how to make charcoal from organic waste. The coast in Mozambique suffers from deforestation since it leads to soil erosion, less protection against storms and increased flooding. That is why this education of reusing waste is extra important there,” Mr. Vasconce says.

AMOR have been able to achieve a lot during the years they have been active. They have started recycling in several cities in Mozambique, created jobs, and increased the possibilities for marginalized groups. All this cannot have been easy, I assume, and when I continue talking with Mr. Temperman I feel I have to ask him if it has been so smooth as it might appear.

What are AMOR’s challenges?

“Money. That is always the most difficult, financing the operations and creating a successful business model,” Mr. Temperman says. “In the start, no one believed we could go to such a poor country as Mozambique and make recycling work. So, it was hard to get start-up capital, both from investors and the donor community. They did not believe in the idea, but some years later we had transformed waste dumps and given more than a thousand families the possibility to live on recycling. Another difficulty is the fluctuating oil prices since they affect the interest in buying recycled materials. It is also challenging to reach people and make them understand why it is important to recycle and take care of nature. It takes time to build trust in communities and get the name out there.”

The future of AMOR

Before our conversation wound down, I had to ask about the future of AMOR.

“We are working actively to improve the legal frameworks for recycling. One possible way forward that is discussed here is to make it obligatory to recycle,” Mr Temperman says. “We are also looking into ways of including ICT in recycling; we think that it can, for example, be an effective tool in the evaluation of private sector initiatives in the waste management sector and improve consumer involvement. Another idea we are working on is reverse logistics. Many trucks go to the north with equipment and goods but come back empty. Our idea is that they could bring back recyclable materials and waste. This would be a multiple gain since transport companies get paid both ways, the recycling industry gets materials transported to the south and local communities in the north get rid of their waste. Not to mention the reduced greenhouse gas emissions since less transports are needed. Finally, we hope to increase the number of pickup clients and expand the coverage of recycling units.”

Waste Collection in an App

The municipality is also taking action to improve waste management. A law introduced in 2016 that made it illegal to give away plastic bags for free gave good results. They are now using ICT to have direct communication with citizens on where there are waste problems. Residents can download the MOPA app or gain access via the Internet (http://www.mopa.co.mz/). In the app, citizens of Maputo can take a picture of waste collection problems such as an overfilled bin and mark it in the map. The municipality sees the problem and sends out a team to fix it. The app user can follow the status of the problem from reported to fixed.

Even though MOPA has not reached its full potential and can only be a part of reducing waste problems in Maputo, the concept of involving citizens and investing in systems to improve the use and evaluation of waste management services is a step in the right direction. Hopefully it can be an inspiration for other cities. Despite the big negative impact insufficient waste management has on communities, it is rarely prioritized by authorities.

Walking around in Maputo it is clear that, as in many other towns, there is space for improvement in how waste is managed, both by individuals and by the municipality. During my time in Maputo it has also become clear to me that there is a lot of work going on to change things for the better. Waste management is a global challenge. But with good initiatives using new technology and skilled people there will be progress. Add love and big things can happen.

Engineering for Change invites Dr. Evan Thomas, Director of the Mortenson Center in Global Engineering at the University of Colorado Boulder, to share a new series called Profiles in Global Engineering. The profiles are interviews with engineers working in global development, each adapted from Dr. Thomas’ book, The Global Engineers: Building a Safe and Equitable World Together. As a child, Chantal Iribagiza witnessed the impact of workers with the Dutch foreign aid agency...