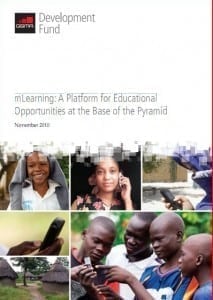 The GSMA Development Fund released an important report(pdf) on the state of educational programs offered through mobile devices, and the potential for their improvement. Through case studies and expert recommendations, the report shows how mobile phones and other networked devices can boost education for children, adults and teachers in developing countries.

There will be an estimated 5 billion GSM connections worldwide by the end of 2010, the report mentions. Because phones are so plentiful, and cheap, they are often the only infrastructure in hard-to-reach rural areas. Conflict, cultural values, the need for children to work to support their families and disabilities have prevented about 69 million children worldwide from gaining a primary school education. And 759 million adults are illiterate. For them, “mlearning,” the subset of elearning that is done through mobile devices, is a way forward, and could be an only option.

There are a few other advantages to mlearning. It’s cheaper to update a cloud-based curriculum than to print and distribute new books. And 3G-capable devices put photos, videos and music into classrooms. Also, people with disabilities are broadly left out of the developing world’s educational systems, but mobile devices are customizable to serve the blind or deaf, and they bring the classroom to the homes of those who are have trouble traveling.

Here are a few of the report’s conclusions.

By 2011, 350 schools and 70,000-80,000 students in the Philippines will have school lessons enhanced through educational videos. The Ayala Foundation, Nokia and international donors have put 3G-connected mobile phones in classrooms in a program called Text to Teach (T2T). Trained teachers search for the videos they want and then play them , connect the phones to a TV and play them for the students.

In Pakistan, 98 million people use mobile phones and 60 million are illiterate. Women in particular have limited educational opportunities, both because learning centers can be hard to reach for rural families and because women are often discouraged from leaving the home. A Pakistani mobile operator, Mobilink, has partnered with UNESCO and a local NGO to promote literacy by giving cheap, SMS-capable phones to 250 young women in Punjab.

The women receive six short lessons in health, finance and other skills by text message every day in their native languge, Urdu. They then read and respond. At first, the pilot community resisted the idea of giving women the phones, but after seeing the project in action, most families now support it.

Paying for ebooks and other educational materials through mobile devices is not a big business worldwide like it has become in developed countries, the report states. Governments could help fund the effort, but any financier would need to see the benefits of such an investment. To recognize the payoff, we can start by taking a look at how mobile devices are actually used. It turns out that 39% of the educational programs supported by network providers are for learning languages. After that, vocational training, health education and literacy services were also popular.

Effective programs should take into account local customs and use local languages. That can be a challenge in areas with multiple languages spoken by people who are separated by terrain or tradition.

Another obstacle is handset technology. Smartphones aren’t cheap, but cheaper phones aren’t 3G connected, so programs may be limited to text and photos.

Finally, mlearning is an emerging market still without a champion. There hasn’t been a big program that has launched the field into the worldwide mainstream.

To counter some of those challenges, GSMA recommends that businesses treat mlearning as a business, not a charity, and that they get involved now, rather than waiting for mobile technology to improve.

The report has many more details, cites its sources and is worth a read. Here’s the link.

mLearning (pdf): A Platform for Educational Opportunities at the Base of the Pyramid

Unicorns and Platypuses: The Myths and Hidden Lessons Big Tech Holds for Non-Profits

The business models of successful technology enterprises are often held up as ideals that technology-centric non-profits should emulate, but many of those expectations don’t...

E4C is now accepting applications to this Winter Fellowship 2022! Apply at this link. Engineering for Change has joined an international collaboration to research...