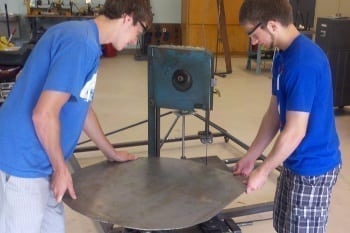 The students are charged his students with the design and construction of vertical-axis wind turbines made from recycled materials. In the 20-knot (23 mph) winds common in coastal Cape May Courthouse, New Jersey, the turbines should generate 500W of power. Tests with a low-wind permanent magnet generator are pending, Joe Schmidt, the physics teacher who heads the class at Cape May Technical High School, told E4C.

This kind of hands-on education is steeped in the DIY and maker ethos that we applaud, so we asked Schmidt and one of his students to talk about their projects. Schmidt heads a Green Engineering course for seniors at the high school, where his students just finished their immersion training in sustainable, affordable design.

Casey Tomlin and Matt New stand by the turbine they made from scrap metal and salvaged parts. Photo courtesy of Joe Schmidt

Working in teams of up to five students, the teenaged engineers gathered parts from the school’s plumbing and electrical scrap heaps, a nearby amusement park called Morey’s Piers, and a local boat building and repair service, Yank Marine, which donated fiberglass.

Go-cart frames became the turbines’ bases and pillow block bearings. Galvanized fence posts transformed into the turbines’ main shafts, and sign posts, galvanized conduit and PVC pipe, all from the school’s maintenance scrap heap, are newly incarnated as the turbines’ frames. The students took charge of the entire build, from design to build, including the welds.

“I never really thought about how much stuff there is that people would consider junk, that you can use to create something entirely new,” Carly Hemmingway, one of the student engineers, told E4C. “I look at the world with new eyes—that an old bike can be used for scrap material and gears, or that an old go-cart could be cut up and welded to form a frame for almost anything.”

The turbines are designed to generate 500W in 20-knot winds. Photo courtesy of Joe Schmidt

“From a design standpoint, the most remarkable feature is that all the turbines work at some level, and they have been running problem free for a month outside in some severe weather conditions,” Schmidt says.

The designs are variations on the scoop-bladed Savonius. One has vertical helical blades. One is a pinwheel with a six-foot diameter and a tail that steers it into the wind. One has vertical scoops and another has horizontal scoops made from five-gallon buckets split down the middle.

Next on the schedule, the students are making mounts for the generator. Schmidt doesn’t have power output numbers, yet, but he’s seen 80-100 RPM in 15-20 knot (17-23 mph) winds. He plans to use pulleys to produce the 500W that the students have aimed for.

And next year, the program will expand. The students will build turbines, plus solar clothing for survivalists and ocean wave energy harvesters.

These recycled turbines represent a spirit of invention for underserved communities that we support at E4C. We’ve seen some important, even game-changing devices for small-scale energy production conceived in university programs, start ups and aid organizations. The work in schools such as MIT, Stanford, and Arizona State University, and businesses such as Catapult Design and Fenix International, to name a few, leads to products that light off-grid homes and power rural clinics in developing countries.

Schmidt’s Green Engineering course offers the kind of hands-on build that could renew interest in science and technology in the United States. With Schmidt’s students, at least, there’s hope that future engineers could focus on sustainability.

“I think it’s remarkable that we can recycle almost anything for a different use. That skill of seeing the possibilities can be used in any field,” Hemmingway says.

One block north of the walled old city in the heart of Chiangmai in northern Thailand a glass-front shop displays flashing LED traffic lights, wind turbines and more than a dozen solar devices. Engineo and its team of engineers and technicians designs, assembles and sells products powered by renewable energy. The company’s solar panels, solar water pumps, wind turbines and biogas digesters power the region’s farms, roads and even a...