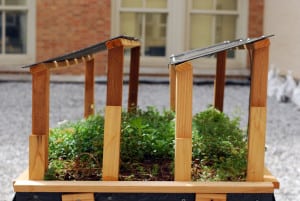 This model of a single-story has a green roof planted in sedum under the shade of solar panels. It is part of an experiment in integrating green roof technologies at the Bronx Design and Construction Academy. Photo credit: Brooklyn Botanic Garden /viaNate Wight’s blog

Four helpful facts outline an experiment in green roof technology at a high school in the Bronx. One, for solar photovoltaic panels, heat is the bugbear of efficiency. Two, a field of succulents planted across a roof top absorbs solar energy, lowering the temperature around it. Three, succulents, such as sedum, thrive in partial shade. And four, roof space is rare in New York City.

Researchers in Columbia University’s environmental engineering program had at least some of those things in mind when they turned to high school students at the Bronx Design & Construction Academy to help answer a question: If solar panels are mounted above a green roof, how do the two work together to regulate temperatures and improve efficiency? The unasked question was, of course, “And can we use your school’s roof?”

The Columbia team enlisted students at the academy, a vocational high school, to help them design and build simple models of one-story homes. The models are four boxes, 2ft by 2ft. by 4ft long (slightly larger than actual New York apartments), and each has a different roof. One roof is gravel, one is green—planted with sedum, a succulent that stores water in its leaves, one has solar panels over a gravel roof and the fourth has solar panels over sedum. The boxes are all equipped to measure temperature, relative humidity, solar radiation and PV performance.

“We have a hypothesis that there will be improved efficiencies and better plant growth with the combined solar photovoltaics and green roof,” says Christina Ho, a part-time Columbia student and department manager at the New York power company Con Edison.

Monitoring began in May for the experiment that could extend for a year or longer. Preliminary data show markedly lower temperatures on the roof with combined systems. Nathaniel Wight, a teacher at the academy and one of Ho’s classmates at Columbia, is documenting the experiment on his blog here.

To build the monitoring boxes, the high school students lined up according to their disciplines. Architectural drafting students drew 3D models, carpenters built the boxes, electricians wired the solar panels and instruments, plumbing students installed drainage and so on.

“Just about every trade represented at this school has played a role so far,” Ho says. “What’s really cool about this is that it’s an interactive teaching tool. The students are learning about renewable technology, how to go about scientific data collection, critical thinking skills and project management.”

To be clear, the high school students are not only the heavy lifters for the Columbia team, they are also the brains behind some aspects of the operation. Involved in an Ivy League study, they are offering tips for how to improve it.

“They had suggestions on how to stabilize the boxes, waterproof the boxes, they did a lot of trouble shooting with the wires to identify the signals coming in and set up spread sheets to organize the data,” Ho says. “They’ve had a lot of valuable input.”

This project could span several years, and if so, it may merge with about a half dozen of the school’s courses. “This project-based learning approach allows for integration into our curricula and allows students to make connections between technology and real world problems,” says Wight, the academy teacher and Columbia researcher.

Though still new, the project has had a dramatic impact on at least some of the academy students. Marco Dwyer, an architectural drafting student, called it “life changing.”

Building the experiment
This well-made video shows the students building and installing the monitoring boxes.

GREEN ROOF at SMITH (GRaS) from zolo films on Vimeo.

The experiment’s site is an actual (life-sized) green roof on a building on the school’s campus that the students also built. It is the first green roof on a public school in New York City, installed last year as part of the school’s new sustainability initiative. The students planted the roof in sedum and other crops. They built rainwater harvesters and solar-powered irrigation and transformed it into a naturally-cooled showcase of urban farming technology. Wight led the green-roof build last year and documented it here.

Stove design flourishes where the needs of a culture butt against constraints of the environment, financial resources and distribution systems. The stove may comprise little more than a container, fuel and a hot surface, but within those elements exists a world of creativity and science. Thousands of variations in clean stove designs have been manufactured and sold or handed out in the world’s impoverished and underserved communities. Some work as...