Solar cookers designed for nomads in Western China could also barbecue meat and veggies in American backyards and elsewhere in the developed world before the year’s end. One Earth Designs has launched a Kickstarter campaign to fund the manufacture of SolSource, their solar cookers, for larger scale distribution in the developed world as well as in their home base in East Asia. Less than two weeks into the campaign, the design firm met their donation goal of $43,000. Now its founders have said that they would like to overshoot their goal for even greater scale up.

One Earth developed these cookers to withstand sand storms, sub-zero temperatures, misfired slingshots and general attrition from travel and use in the Himalayas. The cookers weigh 40lbs (18kg), made of recyclable materials, including One Earth’s proprietary polymer composite reflectors.

They’re fast – faster than charcoal or yak dung, according to Norbu, a Himalayan farmer quoted on the page. In backyard barbecue terms, that means they can cook a hamburger patty in six minutes.

Also, they are easy to use and they look good.

Those last two attributes, easiness and beauty, may have been key to their early success on Kickstarter and to their chance at creating a new niche market in developed countries.

Solar cooking in developed countries seems to thrive mostly as a do-it-yourself project (which we highly endorse), but if it will ever take off as something more than just a curiosity, the technology might need the kind of easy-to-use packaged product, precision design and sleek look that One Earth offers.

SolSource cookers do seem user friendly and fast. “Just point it towards the sun and start cooking. As long as you can see your shadow, you are good to go!” One Earth advertises on its Kickstarter campaign. 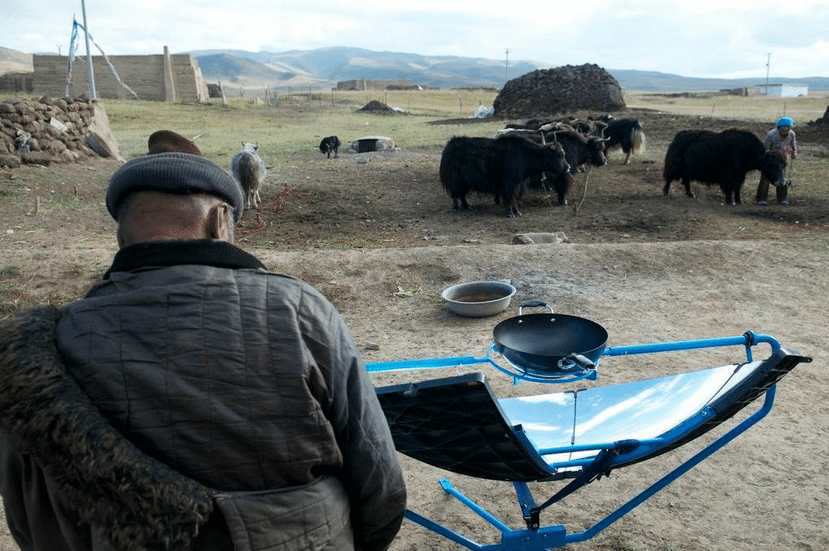 To make the case for solar and other clean cooking technologies, we often cite their role in reducing health, environmental and economic problems among communities that cook indoors over open fires. They cut indoor air pollution and, subsequently, the respiratory disease and death associated with chronic exposure to smoke. They can also put a dent in deforestation from firewood gatherers, and they money in fuel expenses and time for families that no longer have to spend large parts of the day hunting firewood.

But One Earth has turned the conversation around to make the case to Western consumers. Solar cooking reduces greenhouse gas emissions from coal barbecues, which is actually a big deal, One Earth says. Americans firing up their barbecues on Independence Day, July 4th, spew out more carbon dioxide than some African nations emit in an entire year, One Earth says.

Environmental arguments sway cooks in the communities where One Earth works, too.

“One of the things we’ve talked about with the nomads in western china is the responsibility that we all have toward the environment. Most of the families are motivated by the cost and time savings. But one thing they can also appreciate is the environmental impact,” Catlin Powers, the co-founder and COO of One Earth told E4C in a phone call. 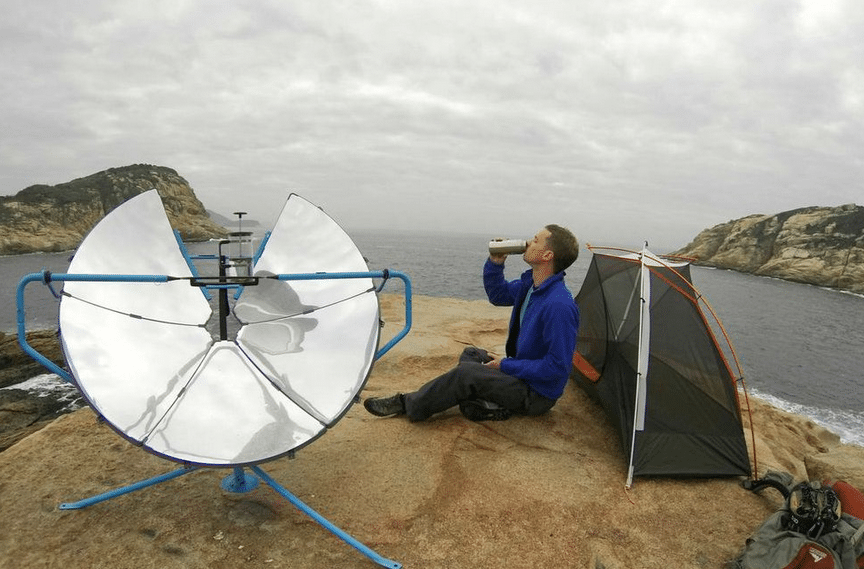 Evolution of a Design: Portability

The SolSource we see today is the descendant of 13 prototypes developed and tested in the Himalayas. Among SolSource’s nomadic consumer base, the ideal device must cost less than the charcoal they normally use, it must be portable but not too light and it must be durable.

“We thought about portability as being one of the biggest challenges that we could overcome. We imported systems from around the world and none of them really worked,” Powers says.

Their first prototype was too portable, however.

“It weighed about 6kg [13lbs] and the families that tried it thought that it would just blow away in the wind. Anything under 15kg [33lbs] was too light, over 50kg [110lbs] was too heavy. People carried about 50kg in wood every day, so that was considered a normal weight,” Powers says.

Evolution of a design: Price

They also had to work to find the right price. High prices put the cookers out of reach for many of the people who could use them most, and low prices could affect One Earth’s sustainability as a company, Scot Frank, the firm’s co-founder and CEO, told E4C.

Low prices may also affect people’s views of the product.

“We’ve seen that if a product is sold for too low of a price, people are wary of it and not convinced that it is playing a positive role in their community,” Powers says.

In Western China, SolSource sells for about $130, half of which can be subsidized by the government if the buyer qualifies.

If the Kickstarter campaign is a success, the increased production could lower the price. And One Earth would also like to set up a cost offsetting program whereby sales in Western markets can subsidize sales in developing regions.

Tailored designs for different cooks In the future, One Earth might expand into new markets in Asia. That move may require a new design for communities with different needs. In Myanmar, for example, a solar cooker would have to be much cheaper to compete with low cost of cooking fuels. But it would not have to be as robust as the cookers that can withstand Himalayan sand storms.

One Earth’s Kickstarter success suggests that new designs might not be necessary for Western markets, however. When you do it right, the device will have a place in nomadic camps in Western China and a backyard in suburban America.

A new package of data-collection and decision-making tools helps communities with poor energy access make informed decisions about how to meet their most pressing energy needs. MIT D-Labs’ Energy Assessment Toolkit is aimed at organizations that work closely with communities that have been overlooked in the work to provide energy to everyone around the world. While aid organizations tend to focus on dense populations where infrastructure can serve the most, and...