The three teams behind the inventions will share a part of $500,000 in prizes and expert design review. They will split the awards with three US teams and three teams from the Kenyan competition in June. Here’s a closer look at the winners.


The tiger prawns swimming in butter on your plate likely began life swimming in a shrimp hatchery. Raising crustaceans is big business in Asia and Indonesia vies with China for the title of number one shrimp producer in the world.

Before they get to the plate, though, the prawns have to navigate life in carefully controlled waters. Imaduddin Majid and his team created a device that automates the water testing process to make the job easier on the farmers. 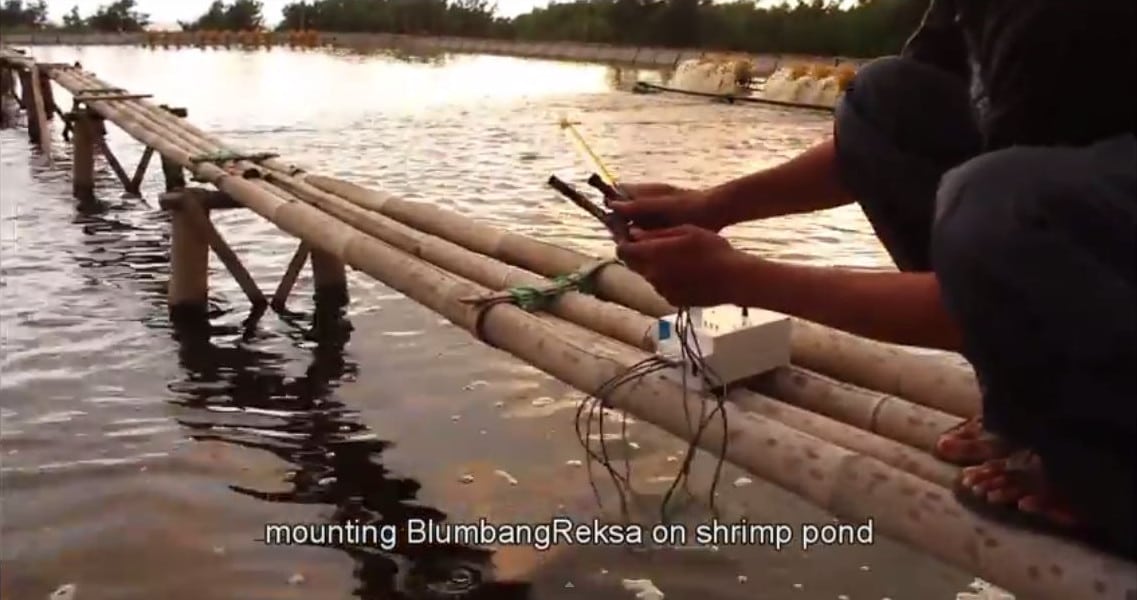 BlumbangReksa goes to work on a shrimp pond in Indonesia. Photo is a screen capture from a YouTube video.

Shrimp and prawns species require specific ranges of salt and acidity at different stages of life. Maintaining the balance depends on changing factors such as the weather and ground runoff. A pond’s salinity can climb during a run of hot dry days, for example, as the water evaporates.

Majid and his team saw farmers in their hometown of Yogyakarta, Indonesia, testing their water periodically or, in some cases, just guessing about the conditions and going off of their intuition. Shrimp farms are expensive and a failed farm can bankrupt a family. To help their local farmers, Majid and team investigated the reasons behind farm failures.

We needed to know what make shrimp die and what we can do to make a change. And we found it. The cause behind these big problems is human error.

To prevent mistakes, the team created BlumbangReksa, an automated testing system that alerts farmers when conditions dip into the danger zone. The device drops sensors into the pond and tests for six parameters: Dissolved oxygen, temperature, salinity, total dissolved solids, pH and the relative humidity of the air above the water. When a problem arises, farmers receive a text message or they can view data streamed to a Web site.

“Usual measurement devices are not enough. Shrimp farming runs very fast, so they need fast responses and real-time measurement to maintain the water quality to keep shrimp healthy. Also, the device must be connected to some database so they can have big data, and the device can do analysis so it can give information about what to do to keep the water quality high,” Majid says.

The prototype costs $1100 and the price could decline to $650 when it is ready for market. The next steps are market research and testing on different shrimp ponds in preparation for mass production, Majid says.

“We do this thing because seeing the farmers’ smiles are the strongest inspiration for us,” Majid says.

See BlumbangReksa in action on YouTube and visit their Web site for more information at atnic.co.


Going to the doctor can be an ordeal in rural India where the nearest clinic can be 50km away by foot. Telemedicine with its promise of remote medical diagnoses has been an attractive solution. It brings the patients to the doctors through the Internet. The Indian company Neurosynaptic Communications has had impressive success with such a system, a telemedicine network that they built called ReMeDi.

ReMeDi places laptop or desktop computers in sparse rural diagnostic centers. The operator runs medical tests that include ECG, blood pressure, temperature, oxygen saturation and listens to the heart and lungs through a stethoscope. The test results are fired off to a medical professional who could be based far away. The system calls up the patient’s medical records and updates them with the new information from the virtual visit. The doctor can even hold a video consultation with the patient over ReMeDi’s system that works over poor connections as slow as 32kbps. 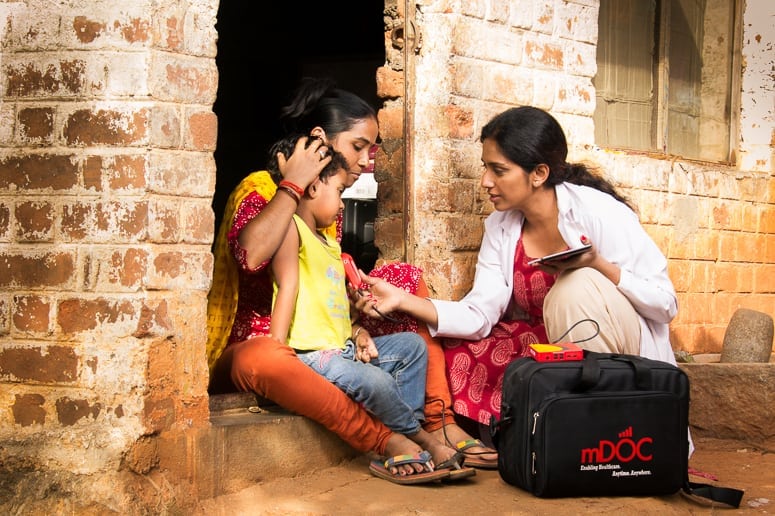 As many as 75 percent of the patients diagnosed in this way have their questions answered and no longer need to visit a medical center. Patients pay US $1-2 per visit and save as much as $6 or $7 in travel expenses to the closest clinic. And each center earns enough to cover expenses and the operator’s salary.

There are 2000 ReMeDi centers in India and neighboring countries, and they serve an estimated 45 million people. Each center caters to roughly 15,000 to 25,000 people in an average of 10 surrounding villages in a 5km radius, says Rajeev Kumar, Director of Neurosynaptic.

Now Kumar and his team are making the system even more portable. Instead of rooting the diagnostics to computers in rural clinics, the newest version of ReMeDi will be on Android phones and tablets.

“The operator can now be mobile and provide services at the patients’ homes as well, instead of being fixed to a center in the village,” Kumar says.

The mobile system is in testing now and should be commercially available before the end of the year, Kumar says.

The portable systems can handle the same five medical tests as the stationary version, and new applications may be coming on line. Here’s the team’s list, from a promotional brochure.


More than 20 percent of milk produced in developing countries is lost before a consumer lays hands on it. Waste stems from inefficiencies on the farm, postharvest, processing and distribution. But it doesn’t have to be that way. In industrialized countries roughly 5 percent is lost before the consumer buys it, thanks in part to prompt refrigeration. 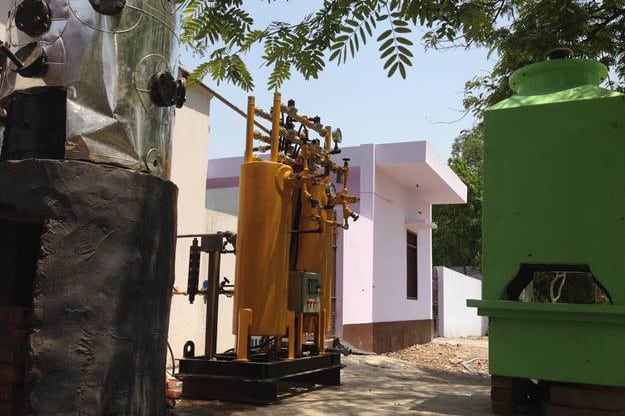 GreenCHILL could prevent some of the milk losses on off-grid farms in developing countries. The refrigeration system in development now burns cow dung or other biomass to operate without a power outlet. The lack of power and refrigeration on some Indian dairy farms has been a major cause of milk losses. Some farmers chill their milk with ice slabs, and others simply try to sell the milk as quickly as possible. But GreenCHILL burns fuel that the dairy farms have in abundance and preserves milk for longer. The savings in chilling expenses and milk loss prevented could add up to offset the cost of the system, says Akash Agarwal, the co-founder of New Leaf Dynamic Technologies which is developing the GreenCHILL. He explains the innovations folded into the design.

“Our technology uses Ammonia gas as the refrigerant. We have engineered an ammonia absorbent and de-absorbent module. This module uses hot water at 110° C to compress the refrigerant (ammonia) which is then condensed in a condenser. A controlled release of the liquid ammonia from condenser through an expansion valve causes refrigeration to happen like any other refrigeration process. The refrigerant from evaporator (bulk milk cooler or air chiller in this case) is then circulated back to the other module where decompression takes place with water at ambient temperature. Using the pressure driven refrigerant cycle refrigeration takes place without requiring a compressor.”

The system integrates with any industrial 500 to 1000 liter milk cooler or cold storage by replacing the unit’s compressor. A full system with cold storage costs $19,000 and sales have begun. The design is versatile and 10 variants are under construction now that run off the waste heat generated by gasifiers. The gasifiers power telecommunications services in rural parts of the northern Indian states Rajasthan and Uttar Pradesh.

After two iterations, research and development continues in house and in tandem with the Indian Institute of Technology, Patna. The aims are to increase energy efficiency and reduce the ecological footprint, Agarwal says.

The Circular Economy Can Solve Food and Water Problems in Rajasthan, Malawi and the World

I lived in the western Indian state of Rajasthan for most of 2006-07. To say that it quickly became one of my most favorite places in the world would be an understatement. I worked on one of the most ambitious urban renewal programs of Government of India, known as the Jawaharlal Nehru National Urban Renewal Mission (JnNURM). My work focused on the sub-mission, providing basic services to urban poor, with an emphasis...