Three devices in development now could improve health in India

Health care and air quality in India and other emerging economies stand to improve in the near future with the potential release of three devices in development there now.

A hypothermia alarm bracelet for newborns is already in use in hospitals and available for sale to parents; a scrubber for the soot-spewing diesel electricity generators that power cellphone towers appears to clean emissions without affecting their performance; and an ultraviolet dermascope could diagnose skin infections on the spot without the need for lab work.

The three innovations won top awards at iShow India, the hardware prototype exposition held in Bangalore by the American Society of Mechanical Engineers.

Bempu by Catapult Design on Sketchfab

The Bempu bracelet tracks a baby’s temperature and beeps if it’s too low for too long.

“It’s a validated algorithm that takes into account drops in temperature and the amount of time at which the device detects a low temperature,” Gini Morgan, a public health expert on the Bempu team, told E4C.

The parameters of that algorithm – just how low the temperature must drop and for how long before tripping the alarm – are a proprietary secret. (Believe us, we wanted to know, too.)

The device raises another question: hypothermia in India? Hypothermia can sap a baby’s strength, stunt growth and sometimes kill, even in a hot climate. People might not expect it and even doctors can be surprised by the risk, says Arun Venkatesan, an advisor to iShow with Villgro, an India-based social enterprise incubator.

Hypothermia can set in at home under a fan, for example, or in the intensive care ward where there are fewer nurses watching for problems than might be found in developed-country hospitals.

“The only way to catch it is to monitor,” Venkatesan says. “So the Bempu device fits this need.”

Since its debut in hospitals in November, Bempu has alerted doctors to three babies who developed infections that led to hypothermia and might have died without the early warning, Morgan says.

An independent study underway at Jawaharlal Institute of Postgraduate Medical Education and Research in Puducherry has so far found that the device is relatively accurate, at 98 percent sensitivity and 92 percent specificity.
Bempu’s potential is great, says Bob Hauck, the retired Chief Mechanical Engineer at General Electric and a judge at iShow.

“Infant mortality in the developing world is still huge. If in all of this process you save one child, that’s worth it,” Hauck says.

A handheld ultraviolet lamp and detector that is in development now may soon be able to identify the exact species of bacteria or fungus causing an infection.

“We have a list of 10 bacteria that are clinically relevant and with this we can detect them noninvasively,” says Geethanjali Radhakrishnan, who heads the team developing the device.

That could make a difference in hospitals. Skin and tissue infections by bacteria and fungus are the “biggest burden” now in intensive care units, says Dr. Aayush Gupta, a senior resident dermatologist at Dr. D.Y. Patel Medical College in Pune who is advising the dermascope team.

Proper treatment generally requires a lab culture to identify the species of pathogen underlying the infection, a process that can take one week for bacteria and four to six weeks for fungi. Rather than waiting for the results, doctors often prescribe a broad-spectrum antibiotic. That kind of drug has a good chance of treating the infection, but it can also attack benign and even beneficial bacteria. And the overuse of such antibiotics contributes to resistance that creates “super” bacteria that are hard to treat. 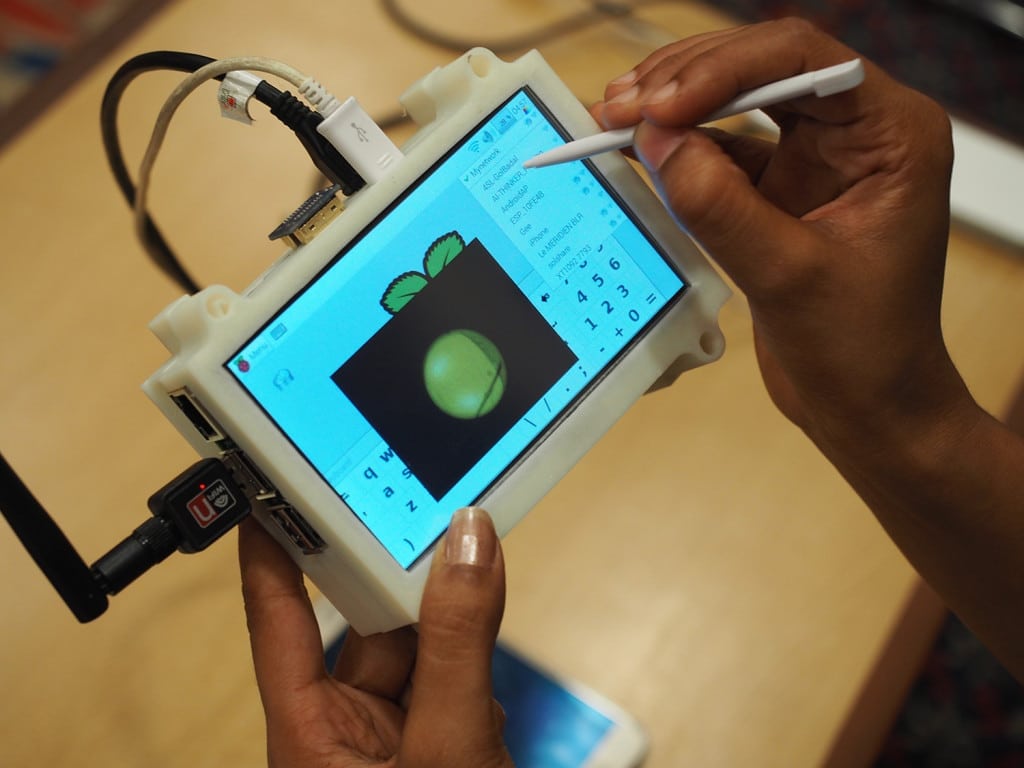 The dermascope could speed the process with UV light. Infection-causing bacteria and fungi fluoresce when they are under UV light. That is, they glow by absorbing and then emitting the light at a different wavelength. And certain microbes react to different wavelengths of UV light. By adjusting the UV wavelength and then observing the fluorescence, the dermascope can diagnose the species behind the infection. In theory. The device has not yet been tested on skin or even on pathogens, but the principle may be sound.

By turning up the UV intensity, future versions may even be able treat infections, Venkatesan at Villgro says.

The next step is validation of the concept, which should take place later this year.

inC by Catapult Design on Sketchfab

The air in Delhi is so polluted it is said that breathing there for a day is like smoking 10 cigarettes, but a new soot scrubber for smokestacks by Chakr could someday make a difference.

A lot of the city’s pollution can be attributed to the telecommunications industry. In one year, 2011, telecoms in Delhi pumped 382 tons of carbon dioxide and 2123 tons of particulate matter into the air as exhaust from diesel electricity generators attached to cellphone towers, according to the Indian Institute of Tropical Meteorology and Forschungszentrum Julich in Germany. The towers need uninterrupted energy that the grid can’t supply, so they each have their own diesel engine keeping the network up.

As much as Delhi’s telecoms pollute, they aren’t the worst of the problem. Base stations in off-grid rural India consume more diesel and spew more soot than Delhi’s towers. In total, the country’s telecom industry consumes 7.5 billion liters (2 billion gallons) of diesel each year, the researchers estimate.

“As a mechanical engineer, I thought there must be an engineering solution,” says Arpit Dhupar, Chief Technical Officer at Chakr Innovations.

Chakr’s solution is a soot scrubber that attaches to a generator’s exhaust manifold. It strips nearly 70 percent of the particulate matter – the soot – from the exhaust by passing it through a liquid solution. The ingredients in that solution are a company secret, but the liquid carbon that the scrubbers create is where Chakr plans to make its money.

Dhupar and his team have figured out to convert the carbon solution into a black ink or paint that they call “inC.” The team has used inC to print t-shirts with clean-air themes, such as “This shirt is printed with pollution.” The pigment has also been used to paint murals around Delhi with words like “breathe.” Dhupar figures that the liquid soot could be used in textiles, construction, car tire manufacture and art in general.

Each winning team in India took home $15,000 in grants, 20 hours of design consultation with the US-based firm Catapult Engineering, a review by ASME’s hardware development experts and copies of Autodesk’s Fusion 360 software. The next show is this month in Nairboi, Kenya, and the final show is in Washington, DC, in the United States in mid June. For more on iShow please see thisishardware.org.