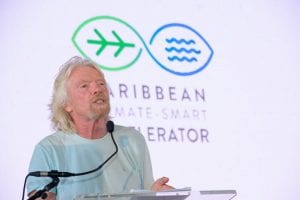 After hurricanes Irma and Maria tore through the Caribbean in 2017, devastating dozens of islands – including billionaire Richard Branson’s private isle, Necker Island – Branson called for a “Caribbean Marshall Plan.”

He wanted world powers and global financial institutions to unite to protect the Caribbean against the effects of climate change.

That hasn’t happened. So Branson and his government partners from 27 Caribbean countries hope that his celebrity, connections and billions will prod local politicians and the financial community to act.

In August 2018, at a star-studded event at the University of the West Indies in Mona, Jamaica, Branson helped to launch the Caribbean Climate-Smart Accelerator, a US$1 billion effort to kickstart a green energy revolution in the region.

Its aims include convincing global financial institutions to fund ambitious climate mitigation efforts in the Caribbean, upgrading critical infrastructure across this vulnerable region.

Well before Branson’s arrival, however, some Caribbean countries were already working to break their dependence on fossil fuels. 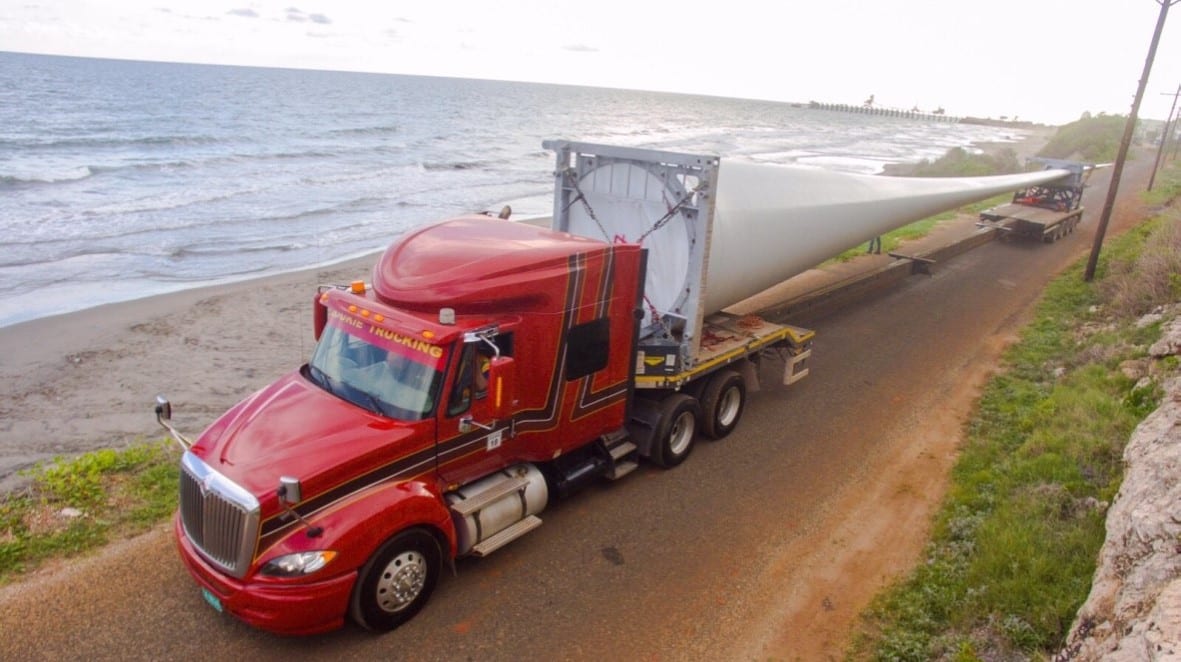 BMR Energy delivered and constructed wind turbines with a hub height of 84 meters (275 feet) to St. Elizabeth Parish, Jamaica. This truck is carries a tower along a road fronting Kaiser Bay. Photo courtesy of BMR Energy

Even prior to the debilitating 2017 hurricane season, polling showed that a strong majority of people in the Caribbean see climate change as a very serious threat.

The region – where we study renewable energy and climate change – is home to 16 of the world’s most climate-vulnerable countries.

Before Branson took up the cause, several Caribbean nations were upgrading their electric grids to improve energy independence and better prepare islands for the impacts of storms that knock out power.

Jamaica opened the largest wind farm in the English-speaking Caribbean in 2004. The Wigton Wind Farm now helps power over 55,000 surrounding homes, households that would formerly have used some 60,000 barrels of oil annually.

As part of its national goal to generate 50 percent of all its power using renewable sources, Jamaica now hopes to build offshore wind farms.

It has also enhanced the stability of its grid with a hybrid energy storage system that uses a flywheel and a battery to store solar and wind energy for use as needed, including after storms.

Dominica is another Caribbean pioneer in climate mitigation.

This tiny island already generates 28 percent of its electricity from wind, hydropower and other renewable sources. In contrast, 0.3 percent of electricity in Trinidad and Tobago, the Caribbean’s main oil exporter, is renewable.

In an effort to diversify its energy sources away from diesel, Dominica’s government has secured $30 million from the international Climate Investment Fund and $90 million from the United Kingdom to invest in geothermal energy.

The country is on track to reach 100 percent renewable energy by the end of this year. If it succeeds, it will join Iceland in entirely forgoing dirty oil, coal and gas energy.

Dominica may soon have some more local competition.

Barbados, in the eastern Caribbean, hopes to use 100 percent renewable energy sources by 2030 using a mix of wind, solar and biofuels derived from food waste and grass, which could benefit the island’s ailing agricultural sector.

Such policies are what Branson and others call “climate-smart.” While preparing countries for extreme weather, they create jobs and boost key industries. The result is an economy custom-built for the future.

This is already happening, albeit slowly, in many countries worldwide.

In the U.S., wind and solar are already financially competitive with traditional coal power in many places, particularly for new power generators. So, over time, as older facilities age out across the globe, these technologies are being replaced with modern energy systems.

As in other places, the process of moving more Caribbean countries off fossil fuels requires mustering the political will and financial means needed to transform a nation’s entire grid.

For over a century, governments have created regulatory systems and policies designed around imported fossil fuels. Replacing the archaic tax incentives and regulations that discourage renewable energy development takes time, effort and money.

Doing so requires a detailed analysis of a country’s relationship with energy. How are homes, businesses, tourism, farms and transportation networks powered? Which energy alternative is best suited for each use? What resources are available?

In our observation, local academics played a strong role in getting policymakers in Jamaica, Barbados and Dominica to undertake these kinds of assessments.

University of the West Indies professor Michael Taylor founded the Climate Studies Group to help the region adapt to life with climate change.

Failure to prepare for future storms would mean “the destruction of ‘island life’ as we know it,” Taylor said.

It was an academic, too, who in 2014 first pushed Barbados to commit to shifting entirely over to clean energy.

Professor Olav Hohmeyer of Germany’s Flensburg University – who was then teaching at the University of the West Indies – told the recently formed Barbados Renewable Energy Association that the island had the natural resources necessary to become 100 percent renewable within 10 years.

Barbados wants to reduce the carbon footprint of its tourism sector by enabling cruise ships to plug in at its Bridgetown port. Photo: Robert Pittman (CC BY-ND 2.0)

The university and the energy association worked to convince Barbados’ electric utility, central bank, farmers and local policymakers that an island-wide energy transition was feasible – and strategic.

They also engaged the International Development Bank, which in 2016 published a detailed and generally positive assessment on renewable energy development in Barbados.

Politicians in Barbados were slower to come around, weighing the cost of green energy against other national development priorities.

Then came the 2017 hurricane season.

In May 2018, Mia Mottley of the leftist Labour Party was elected prime minister of Barbados with a bold sustainability pledge.

At the United Nations General Assembly later that year, Mottley declared that her country would be 100 percent renewable by 2030. And she insisted that the world must help Barbados and other island nations in their climate change fight.

Her Labour Party even envisages electrifying Barbados’ busy Bridgetown port, allowing the 500 cruise ships that dock each year to plug into battery-run power sources rather than operating on-board generators.

Three Caribbean countries are well on their way to becoming “climate smart.” With international support, the other 23 may get there, too.

Masaō Ashtine is a lecturer in alternative energy at the University of the West Indies, Mona Campus.

Tom Rogers is a senior lecturer at Coventry University in Coventry, England.

Light is one of those basic things like food, safe water and even air, that we don’t notice until we don’t have it. Some days, refugees in a camp called Kiziba in western Rwanda have had to trade food rations for candles to light their homes at night. But not anymore. Now, the Global Brightlight Foundation has distributed Sun King solar LED lamps to 3700 households in the camp, and...