Learning to Teach ICT4D: 10 Principles Gleaned from Two Decades in the Classroom and the Field 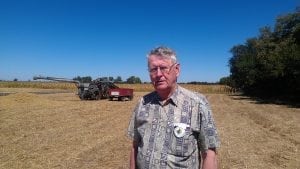 Dr. Ted Nelson, the author’s father, stands in a Nebraska wheat field. Dr. Nelson advocated for computer technology to farmers in the 1960s.

If there’s one thing I’ve learned about teaching ICT4D, it’s that every project needs to be a hybrid between technology and what I label “anthropology” – the assessment of the human factors of culture, behaviors, and most importantly, genuine need for tech solutions.

I grew up around computers, although my father’s 1960s machines were remote terminals connected to a university mainframe that filled a small room. He was something of a visionary, wrestling with the early buggy programs to prove to stubborn Nebraska farmers that these contraptions could help them with everything from taxes to optimum feed grain mix. I was the equally stubborn humanist, maintaining that the old ways were better – until I found myself as the executive director of a human rights organization. Suddenly I was an early adopter, introducing email and primitive social media to my own reluctant colleagues. I can see now that my father was pioneering incredibly useful tools to his rural clients, but finding the language to connect them was devilishly difficult.

“The findings were eye-opening…. A large percentage of the ideas were driven by technological innovation for its own sake.”

When I started teaching at Columbia in 1995, there was still a sharp divide between the technologists and the humanists, who were reluctantly coming around to word processing. But in 2007, push came to shove. My media and communications program at the School of International and Public Affairs needed a course that addressed digital innovations. There was no one else to teach it, so I raised my hand. 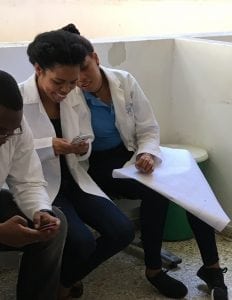 The author’s students worked with healthcare professionals in the Dominican Republic to research ICT4D to assist their work.

The school specializes in solutions-oriented policies for the developing world, and I figured that the first task at hand was to separate the useful innovations from the hype. For five years I sent my 25 international students on a scavenger hunt to track down applications of digital media in a development context, subject them to rigorous scrutiny, and publish the results on a Columbia-hosted Wiki. At the same time, I was tapped as a consultant by organizations ranging from the Gates Foundation to the US State Department to evaluate proposals and projects in the realm of ICT4D.

The findings – from both the research seminars and the consulting – were eye-opening. Donors of every description were eager to jump on the digital bandwagon. But a large percentage of the ideas were driven by technological innovation for its own sake, rather than the needs of the purported beneficiaries. Indeed, a great deal of research went into the tech side, and very little into the problems and practices of the recipients. Proposals were often based on the staggeringly wrong assumption that everyone in the world was connecting at the same speed as the proposers, or had the same desires and needs for information.

“Proposals were often based on the staggeringly wrong assumption that everyone in the world was connecting at the same speed, or had the same needs for information.”

We heard accounts of projects’ social impact. Some were negative – such as my Ethiopian student’s report that a One Laptop Per Child program disrupted an entire year of fourth-grade education in her country. Thousands of dollars of technology was placed in classrooms without training the teachers in its use, at a time when they had gone unpaid for months. Others were success stories, such as the well planned and executed OLPC project in Uruguay that optimized its educational benefits. We recorded costly, grandiose projects that mainly benefited their US instigators, and small, modest projects that took root and blossomed, like Africa’s digital currency mPesa.

After a few years, I felt we had learned some first ICT4D principles.

After seven years of conducting the research seminar, I was eager to test these principals in the field. Teaching ICT4D in the classroom was humbling, because my classes always had graduate students who knew more about their specialized fields than I did. I learned how to relax and learn along with them, posing the questions and seeking solutions in a collaborative fashion – a far cry from the “top-down” didactic style of my own education.

“I learned how to relax and learn along with them, posing the questions and seeking solutions in a collaborative fashion.”

I now work with the Masters of Public Administration in Development Practice program (MPA-DP) at Columbia’s School of International and Public Affairs. There I’ve overseen a series of capstone projects in which my student teams have developed ICT4D ideas to address problems in the developing world. The most advanced of these to date is the spring 2017 Project in Offline Education in Medicine (POEM) in the Dominican Republic, carried out in partnership with the Mount Sinai Global Health Program and the Wikimedia Foundation, with Adam Holt of Internet-in-a-Box. Working with Mariela Machado, a 2016 SIPA graduate and now Program Manager at Engineering for Change, we researched the informational needs of rural clinics in the Dominican Republic and the potential of offline digital computing to address them. The student team conducted the assessments listed above, and came up with an approach that has undergone field trials over the summer.

The benefits are obvious to every doctor who has practiced in disadvantaged rural areas of Latin America. If the institutions that support ICT4D initiatives are open to the principles outlined above, the project and its offshoots can share those benefits with the wider world.

Ms. Nelson’s students published an account of their work in the Dominican Republic in June in Foreign Affairs.

Anne Nelson has taught at Columbia University since 1995. She specializes in international media development, and was formerly the director of the International Program at the Columbia School of Journalism and executive director of the Committee to Protect Journalists. She was a war correspondent in Latin America, and reported from Eastern Europe and Asia, with work appearing in the New York Times, the Los Angeles Times, Harper’s, BBC, CBC, NPR and PBS. Her writing has won six awards, including the Livingston Award for international reporting.

Agbogbloshie in Ghana is a vast urban area that houses a massive e-waste recycling dump. Situated on the banks of the Korle Lagoon alongside the Old Fadama slum, it is home to around 80 000 people. Back in the 1960s as Ghana industrialised, migrants flocked to Accra and settled in Old Fadama. Then, around the year 2000, ships started to come in with e-waste. Today, many work at the “digital...