Researchers in Argentina have developed a low-cost, passive thermal system that is more efficient and holds heat for more hours than existing systems. 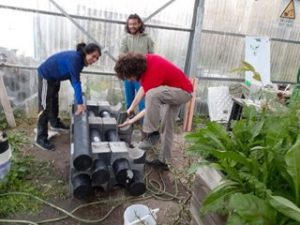 The researchers tested their hybrid thermal management system in a greenhouse with a polyethylene-covered area of 9 square meters.

Greenhouses are increasingly popular in agriculture and are estimated to cover more than 450,000 hectares worldwide. They provide a controlled climate and, in many locations, can extend the growing season far beyond what is possible outdoors. But maintaining steady temperatures can come at a cost.

Read more on greenhouses – Field Report: The Redesign of a Modular Greenhouse in Mozambique

“Inside, there are conditions of temperature peaks that often affect agricultural production due cooling or overheating,” said Graciela Viegas, an architect with the Scientific and Technical Research Council of the National University of La Plata in Argentina. To overcome this, greenhouse operators often resort to burning fossil fuels for heat, which is costly and contributes to climate change.

Now, Viegas and her a research team has developed a passive thermal system for use in greenhouses that is more efficient and holds heat for more hours than existing systems. The system relies on low-cost materials, which makes it attractive for use in underserved communities.

The researchers tested both of those methods in an open-air laboratory at the Faculty of Architecture and Urbanism of the National University of La Plata. Their put it into a greenhouse with a polyethylene covered area of 9 square meters and 200 microns thick. Neither provided the best results. After looking at the preliminary results, the team decided to try a hybrid system—modules made from pre-molded concrete blocks and PVC sheaths filled with water.

“During the research period, different tests were developed with different thermal load capacity accumulated in both water and solid (concrete),” Viegas said. “The greatest feasibility was registered in mixed systems.” 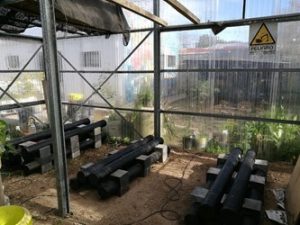 Because the materials were cheap and readily available, the system is not expensive—an important consideration in the non-industrialized world. Viegas estimated the cost of creating a hybrid system to be between $290 and $700.

The team built three thermal modular systems and installed them in a greenhouse of native plants at the university. Compared to either the all-water or all-rock systems, the hybrid passive solar system was able to sustain an even temperature for more hours of the night.

Because the materials were cheap and readily available, the system is not expensive—an important consideration in the non-industrialized world. Also, its average size is 2.00 meters long and 1.8 meters wide. Viegas estimated the cost of creating a hybrid system to be between $290 and $700.

Given the advantages of the hybrid system in terms of energy efficiency and a reduction in fire hazard compared to fueled system, it would seem natural for research to progress rapidly. So far, however, it has not been implemented in real agricultural spaces.

“The project was halted due to the restrictions of the COVID pandemic for 2 years and due to the replacement of personnel working in these facilities,” Viegas noted. However, she hopes the research will be resumed soon.

The system could find uses beyond greenhouses, as well. The architect said that in the near future, these thermal systems could be adapted to social housing. Already, they have been used in the design of several bioclimatic houses developed in a project of the Provincial Housing Institute of the Province of Buenos Aires and the National Housing Secretariat of Argentina.

Claudia Alemañy Castilla is the 2022 Engineering for Change Editorial Fellow and an award-winning journalist who splits her time between homes in Cuba and Spain. Among her accomplishments, Ms. Alemañy Castilla has developed the COVID-19 Cuba Data Project for Juventud Técnica Magazine in Havana, Cuba, where she was a staff reporter specialized in science, technology and environmental journalism. She has also reported for Women in Science (a publication of País Vasco University), the Cuban Institute of Cultural Research ‘Juan Marinello,’ and others.

This article was first published at asme.org. Read the original article.

How Urban Agriculture Improves Food Security in US Cities

During the partial federal shutdown in December 2018 and January 2019, news reports showed furloughed government workers standing in line for donated meals. These images were reminders that for an estimated one out of eight Americans, food insecurity is a near-term risk. In California, where I teach, 80 percent of the population lives in cities. Feeding the cities of the nine-county San Francisco Bay Area, with a total population of...