Fuel briquettes little larger than hockey pucks dry on string runners in the yard of the Foundation of Sustainable Technologies in Kathmandu, Nepal. FoST lies at the end of a narrow street that slopes away from the dust, motors, bicycle rickshaws and storefronts of the city’s Thamel neighborhood. Sanu Kaji Shrestha, FoST’s founder, demonstrates and sells low-cost devices that can improve incomes and save money for Nepal’s small-plot farmers, business owners and families.

We reported on FoST’s briquettes in 2010 and we visited the facility in Kathmandu for an update. FoST, it turns out, is about much more than just fuel briquettes.

The yard is the main showcase. A simple biochar maker built from an oil drum serves to train coffee farmers. They learn to make soil-enhancing biochar from coffee cherries and husks. Nearby, a solar cooker with parabolic reflectors boils water and burns briquettes in just a few minutes of Kathmandu’s morning sun. The briquettes, on rack near the cooker, are pressed from a slurry of paper, sawdust, yard clippings and agricultural waste. They burn about three times as efficiently as those materials would burn on their own, and they smoke up to 70 percent less, according to FoST’s experiments.

Sanu also keeps a greenhouse in the yard where he grows eggplant, soybeans, tomatoes and corn. He mixed chicken manure and biochar into the soil, and the crops grow larger and more quickly than comparison crops in normal soil growing alongside. The eggplant can grow twice as large, Sanu says.

Indoors, a line of parabolic cookers and heaped briquettes against a wall make way for a conference-style table, a small kitchen and tables stacked with inventions and raw materials.

FoST has experimented with dozens of plant materials to include in its briquettes and displays many of them in labeled jars and plastic soda bottles. Some include newsprint, sawdust, grasses, fruit peels, sugar cane, office paper, pine needles, rice husk and many others.

These pictures tell the story. And there are more photos on E4C’s Flickr album. 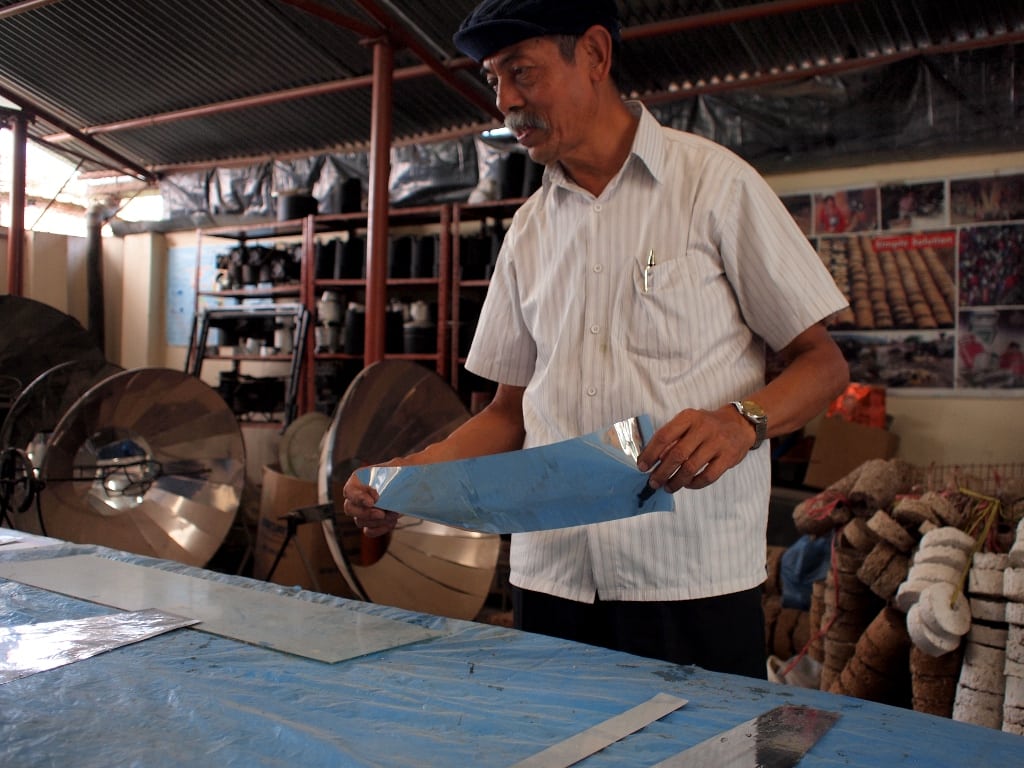 Sanu Kaji Shrestha, founder of the Foundation of Sustainable Technologies, holds a strip of mylar that he is experimenting with as a material for new solar cookers. Photo by Rob Goodier/E4C 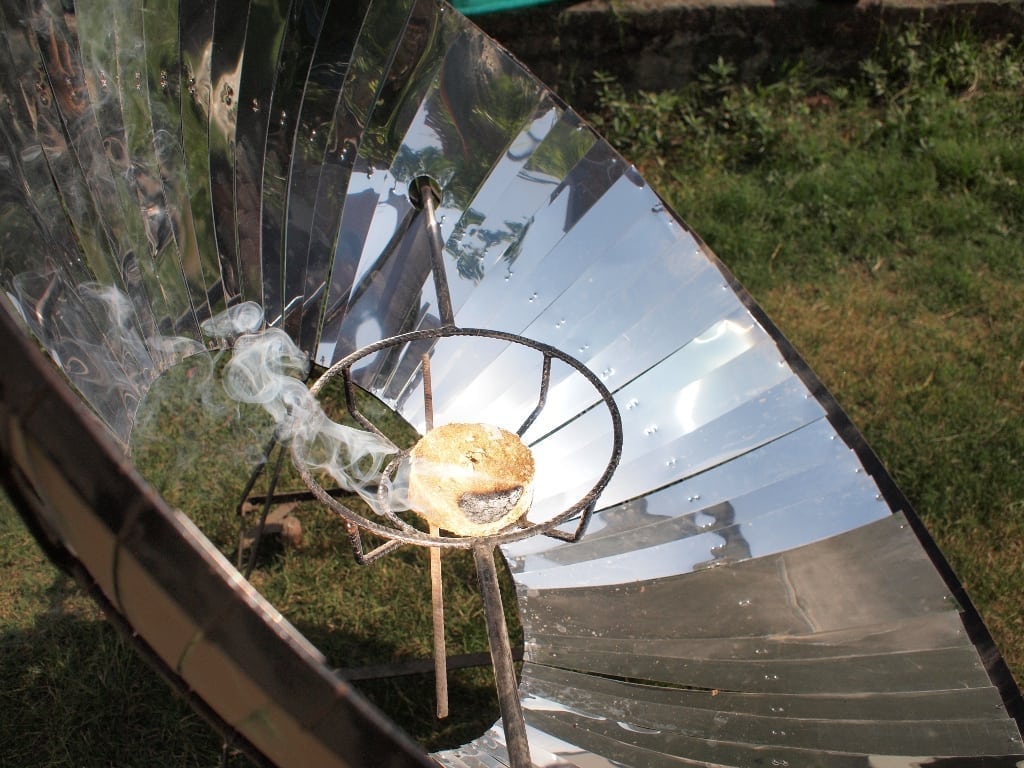 This solar cooker can burn one of FoST’s fuel briquettes in about 10 minutes of Kathmandu’s morning sunlight. Photo by Rob Goodier/E4C 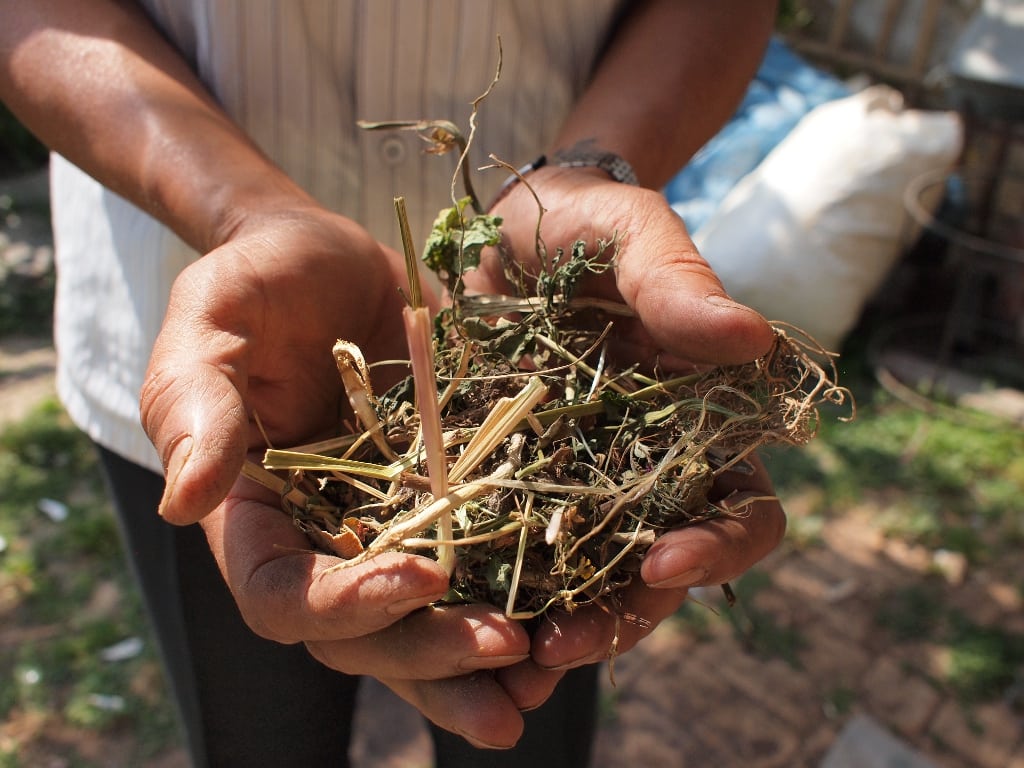 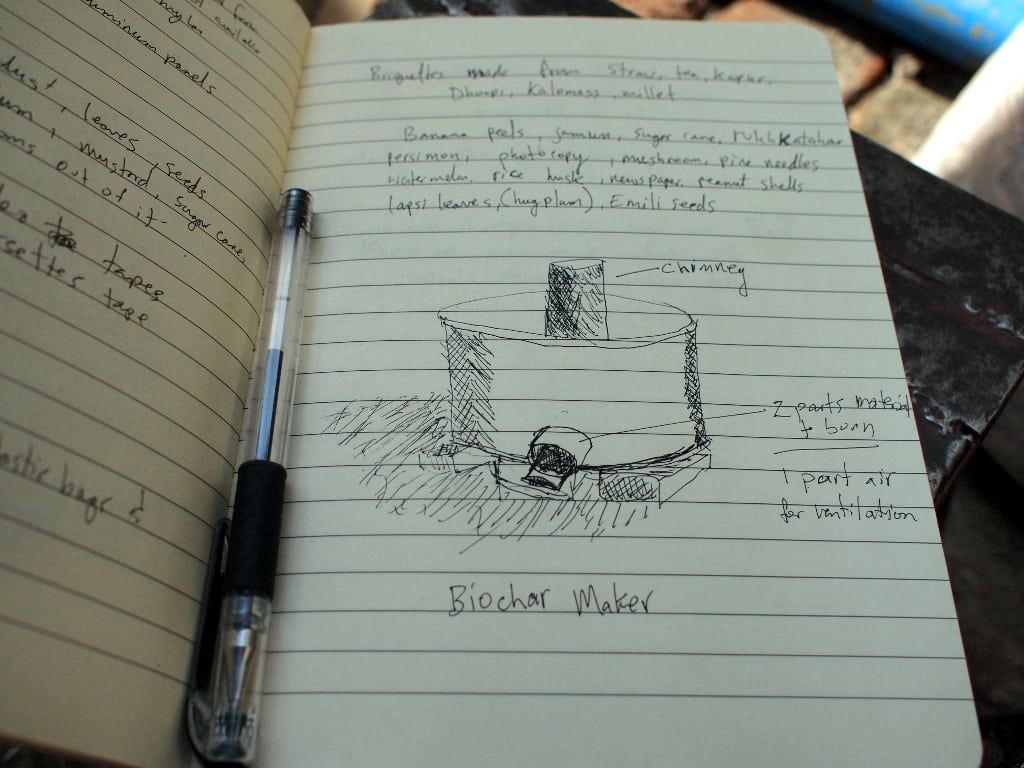 This diagram shows the simple biochar maker made from an oil drum. Photo by Rob Goodier/E4C 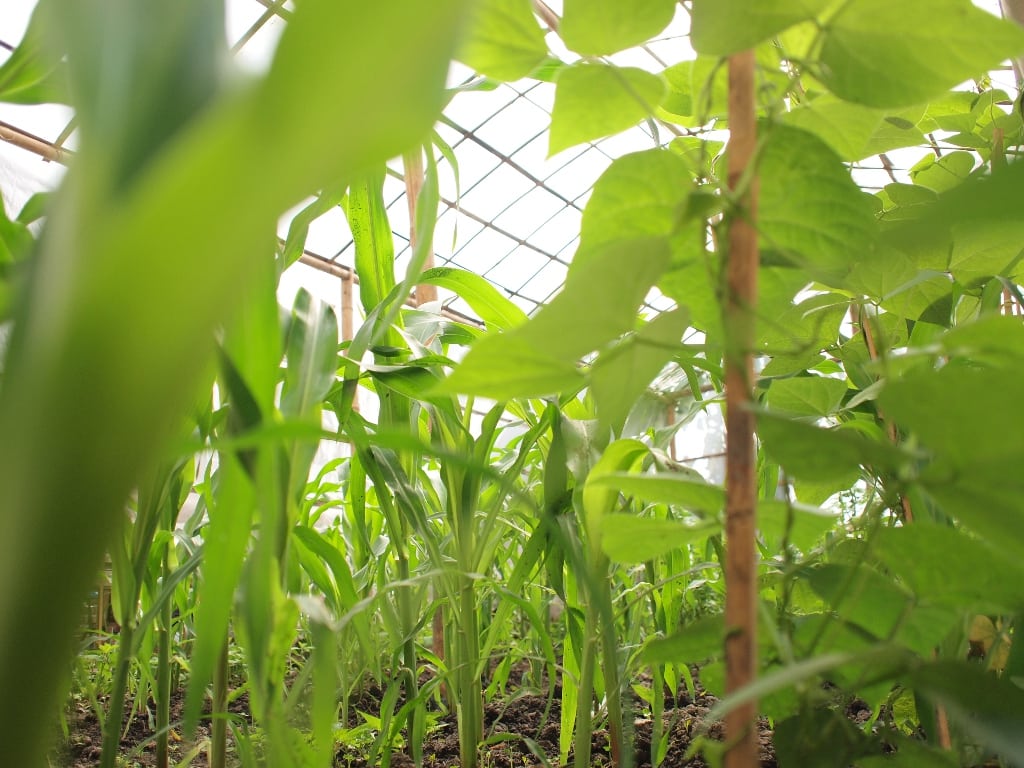 Crops grown in soil enhanced with biochar and chicken manure grow faster and larger than crops grown in regular soils, according to FoST’s experiments. Photo by Rob Goodier/E4C 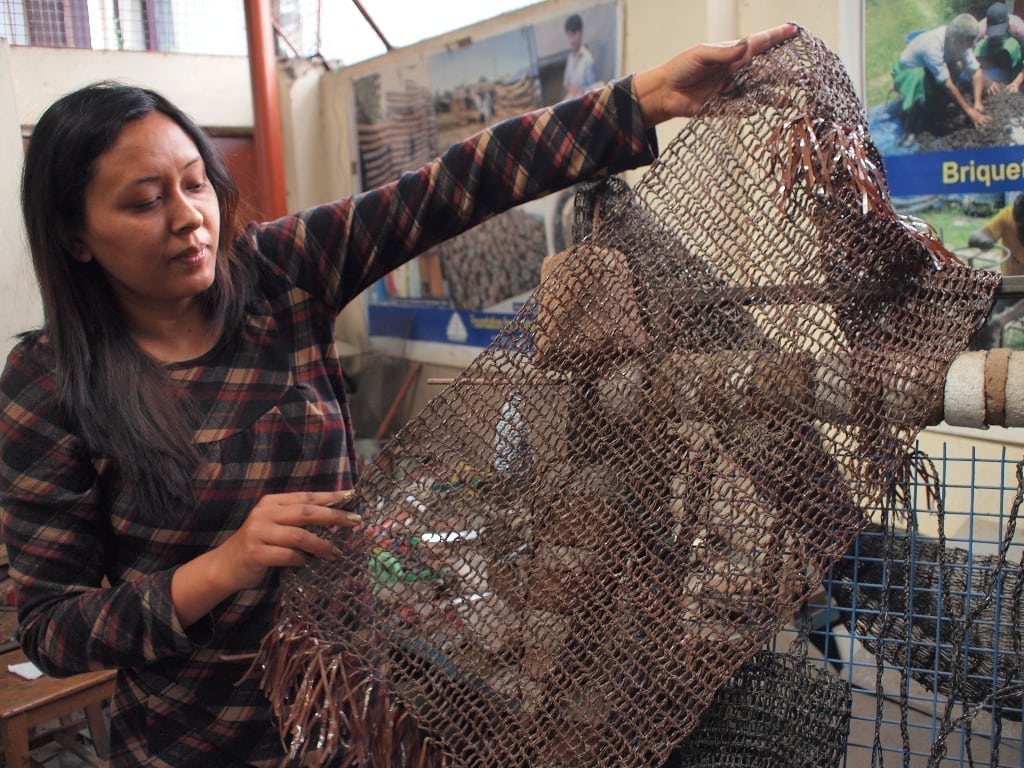 FoST and visiting volunteers experiment with repurposed materials such as this VHS and cassette tape ribbon woven into handbags and table runners. Photo by Rob Goodier/E4C 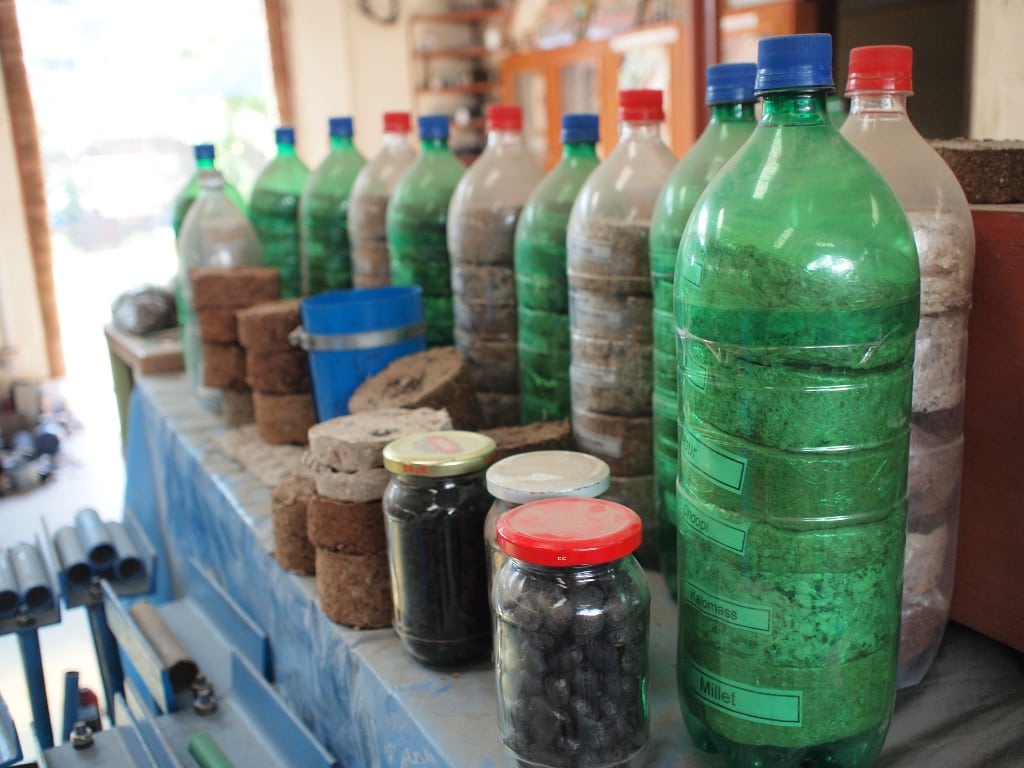 We accompanied Sanu to the Rejoice and Salvation in Trinity Services home for orphans, widows and their children in a village outside of Kathmandu called Jharuwarajhi. The home had recently acquired a briquette press and Sanu was curious to see how it was used.

The home perches on a hill overlooking a commercial brick firing kiln. The kiln’s chimney pokes up from the bottom of a terraced basin of earth excavations for bricks and patches planted with corn and other crops.

The residents press the fuel briquettes as part of their daily chores. When the briquettes have dried, the cooks burn them in a rocket stove or in a long, three-burner, low-smoke, efficient clay stove in the home’s kitchen. Pressing fuel briquettes saves the orphanage and home 30 percent in fuel expenses, says the home’s president, Suresh Kumar Khati.

Besides the briquette press, the home had some other new cost-saving technology, including two solar water heaters and two photovoltaic panels as supplementary power during the region’s frequent blackouts. The devices came through help from Angel Chitrakar at the community development organization Environmental Camps for Conservation Awareness. This six-minute news video shows the briquette press in action, as well as the other devices at the home: An eco-friendly orphanage in Nepal. 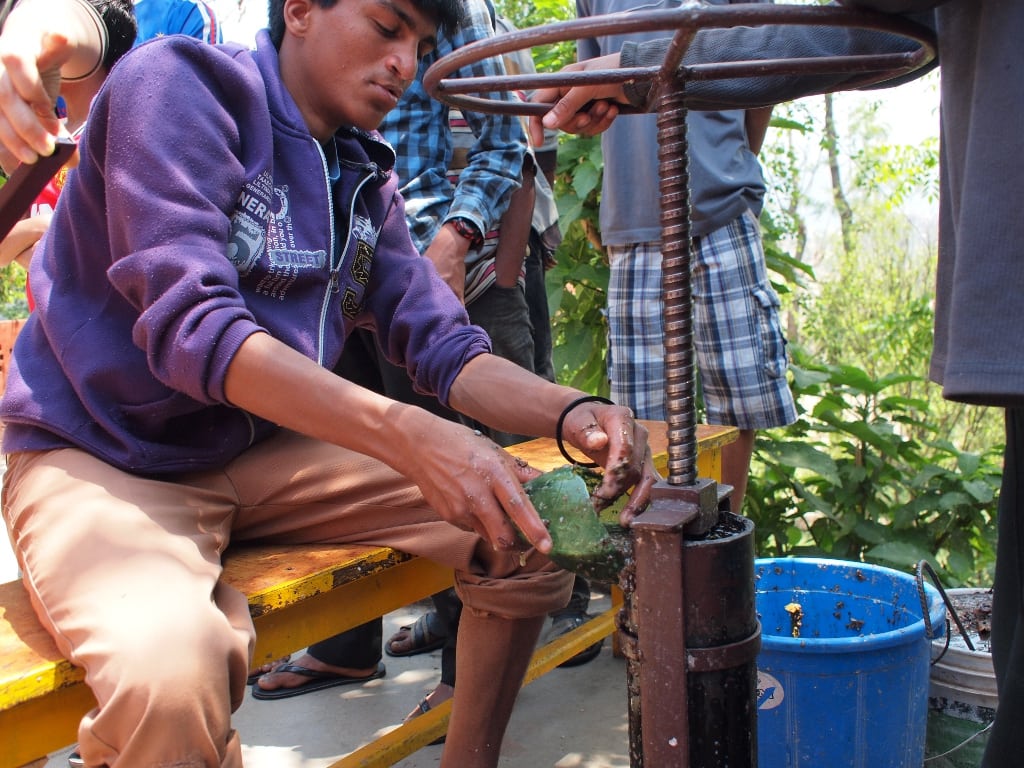 Fuel briquettes have saved money for the Rejoice and Salvation in Trinity Services home for orphans and widows in the village of Jharuwarajhi outside of Kathmandu. Photo by Rob Goodier/E4C 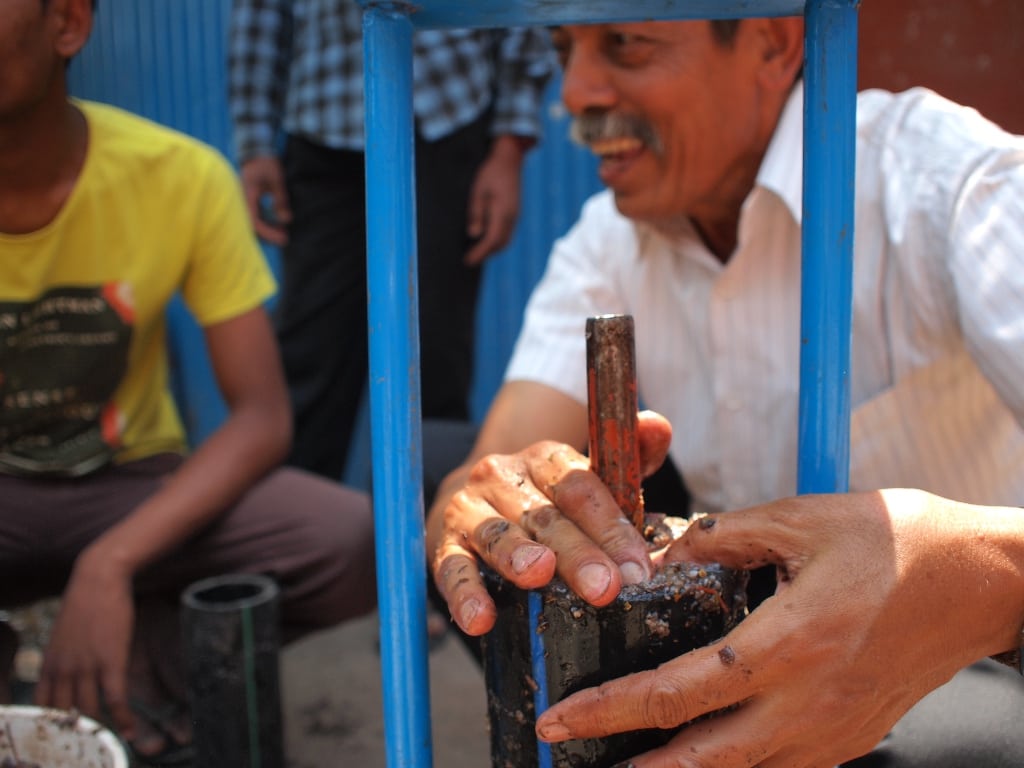 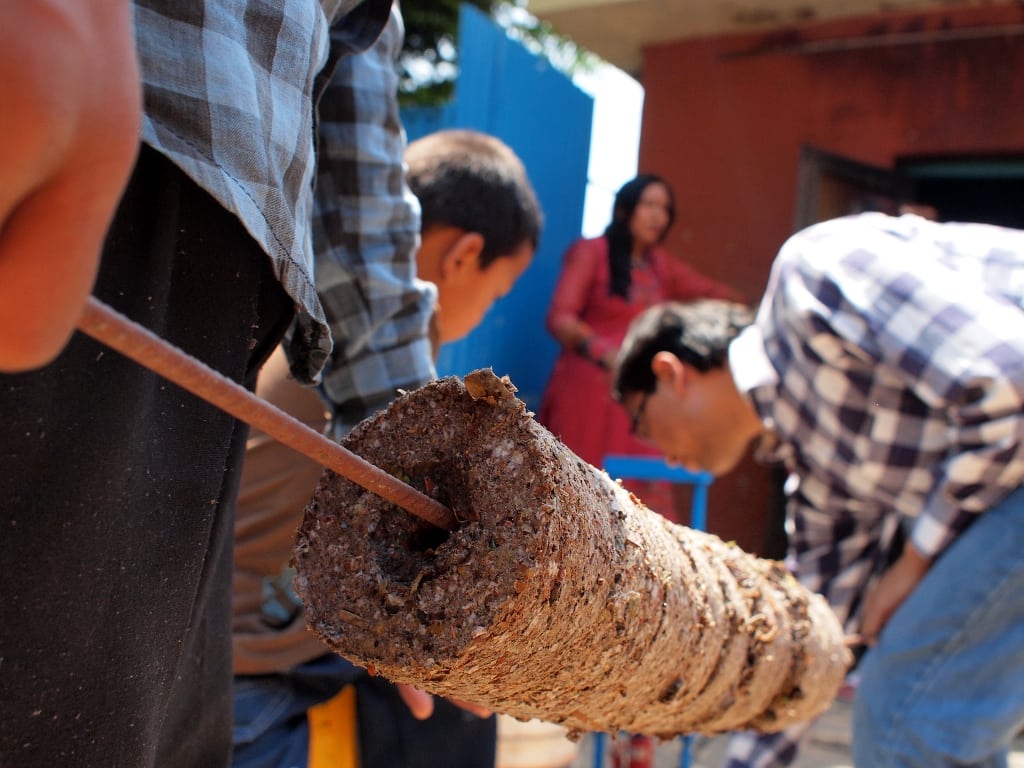 Residents of the orphanage and its president, Suresh Kumar Khati, left, slide briquettes onto a piece of rebar to dry. Photo by Rob Goodier/E4C 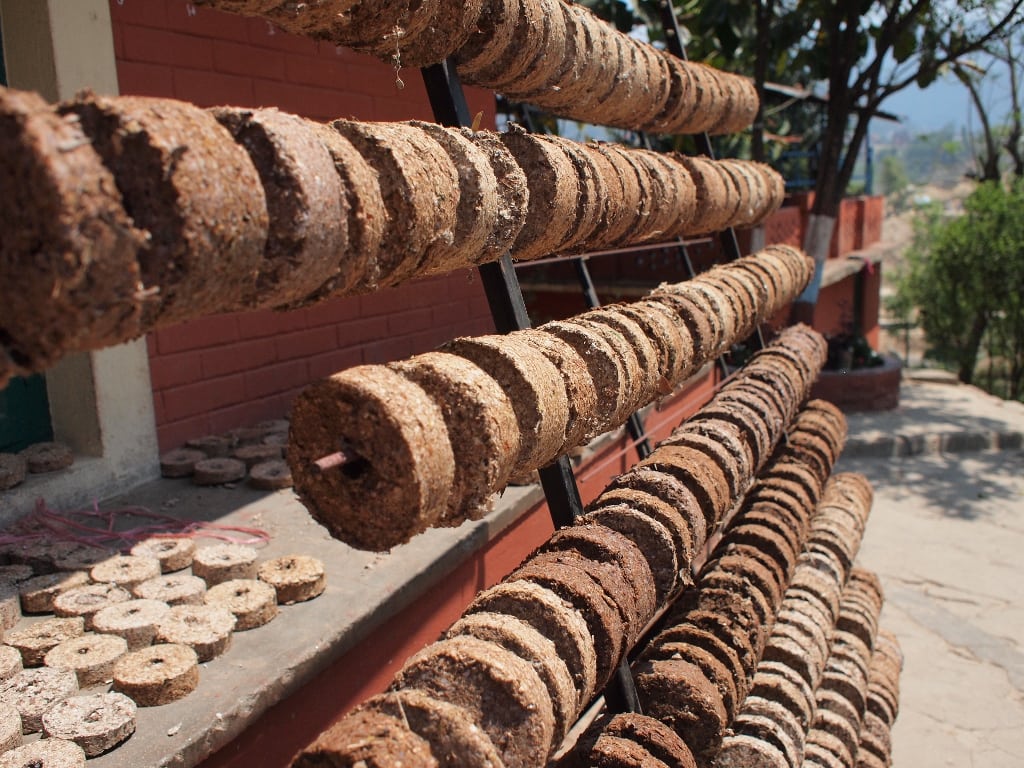 Fuel briquettes dry in the sun. Photo by Rob Goodier/E4C 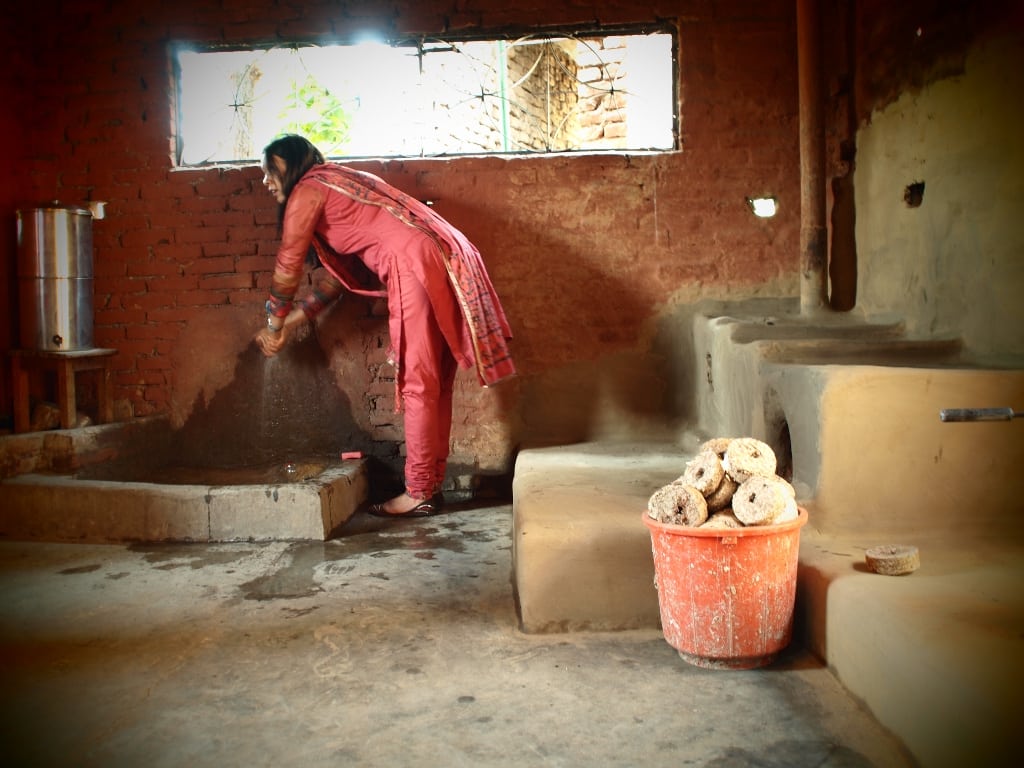 Briquettes burn in efficient stoves like those on the right, and in a rocket stove that is not pictured, to cook meals for the residents of the orphanage. Photo by Rob Goodier/E4C

And the orphanage and home also seeks donations to continue its mission. Please visit the RST Services Web site for more information.

Another View on Sustainability: The Local Perspective, part 2

Part two in a two-part series Last week, we discussed the project perspective on development, which starts when a need is identified. It involves appropriate design, community involvement and buy in, quality construction, operation, and maintenance. Commonly, the process is expanded into the project cycle or a program, which is a series of projects. Both are intended to make the development of infrastructure more sustainable. But both rely on  outsiders...