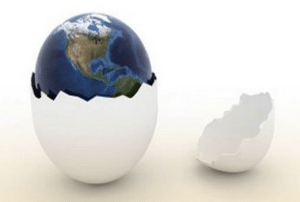 Afrivax is developing Poultry Pharm, a way to quickly produce new vaccines inside of eggs. Image courtesy of Afrivax

Poultry Pharm is one of our Promising Prototypes of IEEE’s Global Humanitarian Technology Conference in Seattle, Washington (USA). For more in the series, please see below.

Since the early 1930s, clinicians have manufactured flu and other vaccines inside of fertilized chicken eggs. The eggs act as disposable bioreactors that breed the virus. When it has multiplied, the egg is cracked and the live virus is mixed with formalin, a kind of embalming fluid, to inactivate it.

Every year, facilities full of hundreds of thousands of eggs manufacture flu vaccines this way. The good news is that drug companies have become efficient at this method and it is the cheapest way to mass produce some vaccines. That said, it is still time-consuming and expensive. And the inside of an egg is not a hospitable environment to all viruses, so many vaccines cannot be produced this way.

Rather than scrapping the egg and the large investments the sector has already made in it, Eluemuno Blyden has improved the process. Blyden and his team are perfecting a means of growing DNA inside the egg by sticking the genetic material that they want to replicate onto part of a virus that acts as an escort inside the egg. They call the technology Poultry Pharm.

Blyden’s company, Afrivax, begins the process with a recombinant DNA vector. In this case, the vector is part of virus that infects chickens, so it plays well with the inside of an egg. Then they combine it with a piece of the virus that they want to reproduce. If they want to make a flu virus, they stick a piece of flu DNA onto the vector, just enough to trigger an immune response in the human body when it is injected, but not enough to cause the flu.

The way the current manufacturing process goes, one egg produces one dose of vaccine, but with Afrivax’s technique, one egg can produce enough DNA to make a dozen or so vaccine doses.

And it goes one step further. Today’s egg facilities can produce only flu, yellow fever and some veterinary vaccines. But Afrivax’s vector can take DNA from viruses that don’t survive well inside of eggs, such as rabies. The technique is flexible enough that our current egg factories could manufacture future vaccines, such as for HIV and malaria.

Blyden proposes Poultry Pharm techniques for use in developing countries, where egg production facilities can be tacked on to biotech labs. Developing countries could cheaply produce the vaccines they need and boost their economies with new jobs at the same time.

“We believe improving the egg platform for wider and safer use could provide a huge resource for global health since it is based on tried and trusted substrate, the hen egg,” Blyden told E4C.

For the inventor, one of the draws to design in developing economies is the wide range of technologies that you can work with. Low-tech innovation is interdisciplinary by its nature. Jessica Vechakul exemplifies the principle. As a Massachusetts Institute of Technology graduate and doctoral candidate in mechanical engineering at the University of California, Berkeley, she has developed bicycle ambulances in Zambia, a charcoal fuel in Haiti, an automatic chlorine doser...