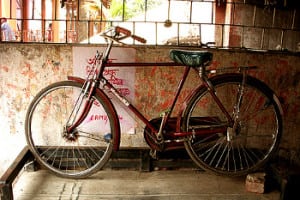 This could be the short-term future of India’s energy sector. No picture is available for the Intel team’s generator. Photo by hern42/Flickr

This innovation is one of our Promising Prototypes of IEEE’s Global Humanitarian Technology Conference in Seattle Oct. 30 – Nov 1. For more in the series, please see below.

Bike-powered electricity generators are a practical solution for Indian households. Surveying the country’s energy landscape, with its tight living spaces, expensive land, and far too many people for the power the country produces, bike generators make sense. Venkat Natarajan and his team at Intel Technology India in Bangalore came to that conclusion and they are testing their own low-cost designs.

“Our focus was to design a low-cost snap-on adaptor to any legacy bicycle in India to power up different kinds of computing equipment and cellphones,” Venkat tells E4C.

Why does bike power make sense? First, because the country has an energy deficit. More than half of rural households, and 400 million people countrywide, are off the grid, according to the World Bank (pdf).

India has hugely expanded its capacity of energy production in the last decades, but Indians themselves still use less power than the average consumption per person worldwide—only 540KWh per year, compared to 2300KWh per person in China and 2750KWh worldwide, according to the International Energy Agency (pdf). Supplying a growing population with enough power to meet its increasingly computerized and energy-hungry needs will be a challenge.

Secondly, there is not enough land to install solar power or other kinds of household generators, Venkat says. But there are about 700 million bicycles in India. Outside of Indian cities, the bike is the main mode of transportation.

“I believe that technologies such as these have a viable market in India. You don’t have to worry about land availability and all that, which is a huge expense,” Venkat says.

Much of the electricity needed in rural households is for low-power devices such as cell phones, LEDs and netbooks. In two minutes, an average rider on Venkat’s prototype can produce enough power to use a cell phone or an LED for two hours. It takes less than 15 minutes to power a netbook for one hour.

One of the best-thought-out features of the generator is that it easily snaps on to most bikes without having to dismantle them.

“We deliberately designed it such that it will be extremely easy to mount the bike onto the snap-on adaptor with no alignment and balancing problems,” Venkat says.

The Intel team is testing the device’s energy generation capacity across the range of different kinds of bike riders. They are trying to boost efficiency in steps of the process such as the power-transfer method from the bike to the generator, the charging system and the charging capability of the battery. One of the important parameters, of course, is low cost. We’ll be interested to see how their machine stacks up to other bike generators.

“There is no solution to climate change that doesn’t involve emerging markets,” Damian Miller wrote in Renewable Energy Magazine in 2009 (pdf). The CEO of the solar energy company Orb oversees the development of unique solar water heaters and photovoltaic systems for sale in rural India. Whether compelled by solving climate change, or for compassion or for a jumble of reasons, Miller’s work has helped electrify some of the world’s most...