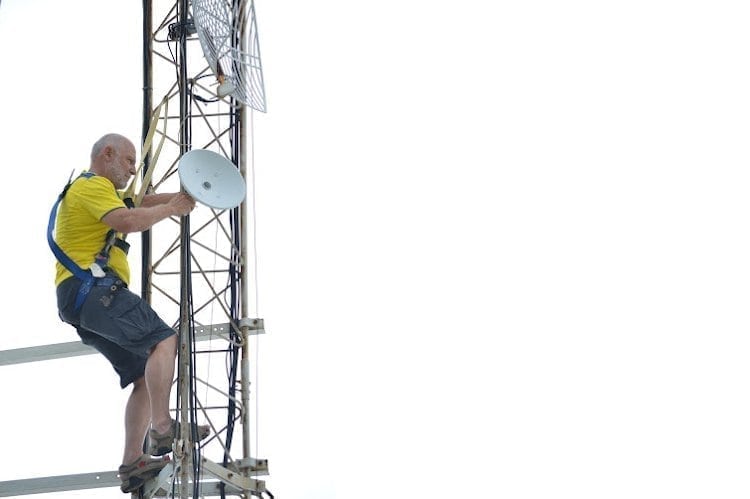 Ermanno Pietrosemoli, a member of the PISCES project, climbs a tower at the University of Guam to position a long-distance WiFi antenna. Photo courtesy of PISCES

Island-hopping long-distance WiFi and a computer lab in a box in Micronesia have demonstrated the viability of low-cost, instant Web access in rural, off-grid communities. The solar-powered hardware has linked a primary school on the Micronesian island of Udot to the Internet, and, with training, the local communities may be building more connections in the future.

An international team of specialists in the Pacific Islands Schools, Connectivity, Education, and Solar (PISCES) Project led the installation in Udot, an island in the state of Chuuk, which is one of the four Federated States of Micronesia.

The project features the leading edge of low-cost computer, solar and WiFi technology. It also includes the training necessary to maintain the equipment, build more WiFi connections, and use the computers in grade-school education. That training may be key, specialists who work in the project have told E4C.

“I think the strength of the PISCES Project is that it even though it is a technology/infrastructure type of project, it looked beyond when the technology is in place,” TR Mori, founder of iSolutions, a technology consulting firm in Chuuk and a partner of the PISCES team in the region, told E4C by email.

“It tries to identify already existing efforts and identify ways the technology can support that effort. Because it is so cost effective, self-sustainable and proven, I believe this project will be replicated many times over,” Mori says. 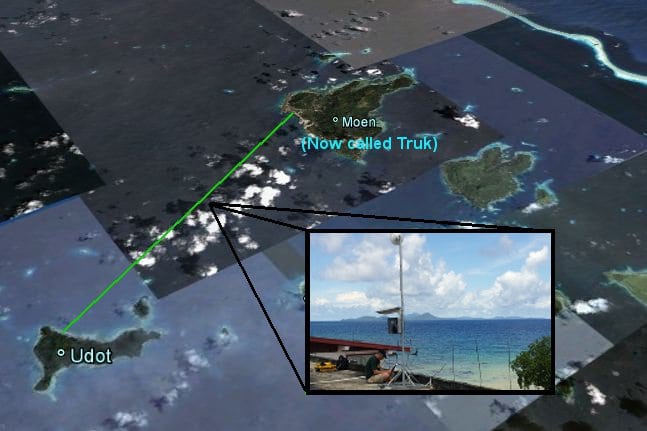 This graphic shows the WiFi link between Weno and Udot islands. The base image is from Google Earth.

First Guam, then the world Besides Mori and other local partners, PISCES comprises experts from US organizations Green WiFi and Inveneo, UNESCO’s International Centre for Theoretical Physics in Trieste, Italy, the University of California, Berkeley’s TIER research group and the Illinois Institute of Technology. We’ve reported on TIER’s work in long-distance WiFi in developing regions, and also on IIT’s solar-powered computer installations in Haiti.

The first phase of the project took the team to the University of Guam, where they taught students how to build and maintain a long-distance WiFi link. Students learned standards and safety for the technology and how to survey sites and plan automated links.

“The training that we’re doing here in Guam is really how to use these devices, how to build these networks out and build that capacity locally so that more islands can get connected with this low-cost technology,” Bruce Baikie, who directs broadband initiatives at Inveneo and founded Green WiFi told the Pacific News Center, a news station in Guam (see the video here).

Then the team installed a link from Chuuk’s main island, Weno across 12 miles (19km) of open ocean to the smaller Udot island. 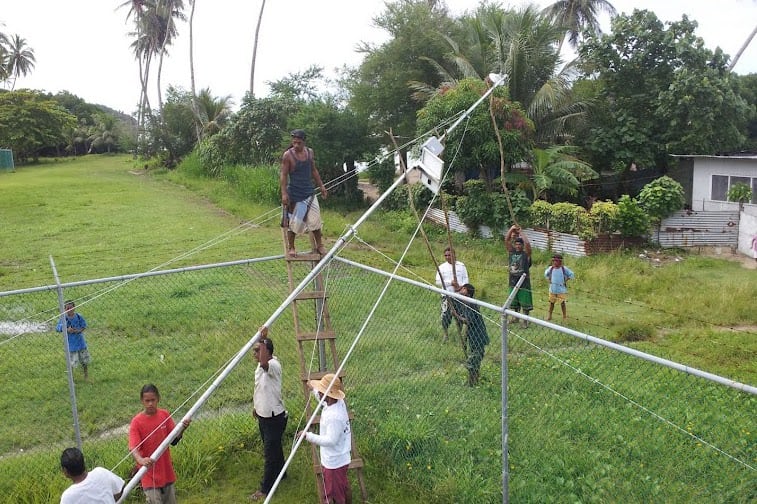 The community in Udot helps the PISCES team install a 40ft tower to place a WiFi antenna. Photo courtesy of PISCES

Long-distance WiFi needs an unimpeded line of sight between each connecting point. So, height makes a difference. To put the antennae and radios in the air, the team mounted their equipment in Weno on the third story of the Truk Stop Hotel overlooking Truk Lagoon, a wreck-diving destination and burial ground for World War II battleships. On Udot, where there are no tall buildings, the team erected a 40-foot pole to gain a direct line to Weno.

Solar computer lab in a box

Udot primary school’s computers came from a start-up called SolarCubed, which developed the “solar computer lab in a box” for off-grid computing. The box contains six laptops with solar panels to charge them that ships easily and sets up quickly on delivery. The panels power the laptops and charge their built-in batteries while there is sunlight, and the laptops run off of their batteries after hours. For the finishing touch, the shipping container itself unfolds into a work table for the computers. (See a video of two people assembling the table from the shipping box.)

Udot’s connection serves its primary school, but it is also available to the rest of the community. 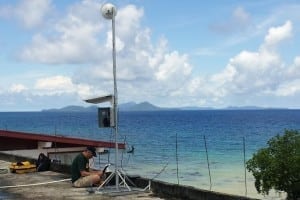 Bruce Baikie aligns a long-distance WiFi link from the roof of the Truk Stop Hotel on Weno island in Chuuk. Udot Island is in the distance. Photo courtesy of PISCES

What’s on the computers?

Now that the computers are online, the question that remains is how to use them. The Honolulu, Hawaii-based organization Pacific Resources for Education and Learning is working with the community in Chuuk to develop and gather useful online materials.

“Content is one of the most difficult parts of this whole equation,” says Laura Hosman, a professor at IIT. “What we have in the western world is not necessarily the best. But, who’s to say that the Khan academy videos aren’t the best thing since sliced bread?”

The language of the material taught is also a consideration. Chuukese is the local language, but much of the educational material available online is in English, an issue that is widespread in the developing world, Hosman says.

The PISCES team and its partners continue to work with the community to settle issues like these and technical problems that arise. In ICT work for development, shortcuts don’t work, Hosman wrote in an article for ICTWorks.

“This whole project, and I’m very proud of it, is actually the result of failures. Things that we’ve learned from things not going forward,” Hosman told E4C.

Based on her past experience in Haiti, and on PISCES in this early stage, Hosman believes that training and partnerships may be the keys to long-term success.

Gender Bias in Data and Tech