William Kamkwamba climbs up in the wind turbine power generator that he made. 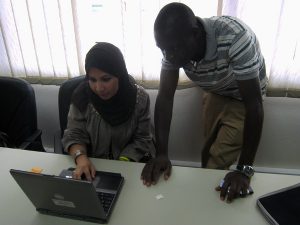 The man who has a vision for revolutionizing Africa’s power supply saw a computer for the first time in 2007. In the Google search field on the screen he typed in the word that has since earned him international fame, generated dozens of news articles, web videos, a documentary and a book deal: “windmill.”

William Kamkwamba already knew something about windmills. Six years earlier, in 2001, he had built a wind-powered generator out of spare parts that he had scavenged in his rural village in Malawi. The breeze blowing through the village of Wimbe had never turned a windmill’s blades before William built his DIY marvel. He was just 14 years old at the time.

Now 22, he returned to his high school in Johannesburg, South Africa, after an exhausting speaking tour in the United States to promote his book, The Boy Who Harnessed the Wind. As he told the story in dozens of interviews, including an appearance on Jon Stewart’s The Daily Show, he built the windmill to power his home and irrigate his family’s fields. During Malawi’s famine of 2001 and 2002, while people scrounged for food, William studied diagrams in the middle-school science book Using Energy. It was on the shelves of a small library that the book’s publisher had donated. William improvised the windmill using whatever he could find – including a tractor fan, a bicycle frame, and PVC pipes that he split and melted over a fire to shape into blades. It took him three months.

Meanwhile, his neighbors and the rest of the country were starving. “People were dying and everybody was looking for food but William was out looking for windmill pieces,” explained Bryan Mealer, William’s co-author and a former Congo correspondent for the Associated Press news agency. “They thought he was crazy.”

They also thought he was practicing witchcraft. “Creating electricity from wind, they thought he was involved in magic,” an audibly tired Bryan said in a phone call just after the book tour had ended.

Creating electricity from wind, they thought he was involved in magic.

Then William threw his handmade switches and lit four bulbs in his family’s mud-brick home. For safety, he had rigged a circuit breaker from two nails, coiled copper wire, a magnet and the spring from a ballpoint pen. The generator produced 12 volts and the villagers lined up to charge their cell phones.

He started with the idea that the windmill could pump water and irrigate his family’s fields, but had only the materials to build a generator. The next year he experimented with a water pump design that proved too difficult to operate, so he shut it down. It wasn’t until a few years later that he was able to link a second windmill to a pump, after his story had caught international attention.

When I Googled ‘windmill’ I found that there were millions of applications. I was like, where was this Google all this time?

That happened in 2006, when a reporter for Malawi’s national newspaper, the Daily Times, wrote about his achievements. The story led William to a group of venture capitalists in Arusha, Tanzania. There, he saw a computer for the first time.

One of the people in Arusha asked him if he had used Google, William related to Jon Stewart. “I said, ‘What does that mean, Google?’ When I Googled ‘windmill’ I found that there were millions of applications. I was like, where was this Google all this time?”

With donations from those who heard him speak, William upgraded his windmill to 48 volts, bought a solar-powered pump and water tanks, and gave his village clean drinking water.

Cell phones are more prevalent than power in Malawi. More than radio, television, or even newspapers, they keep rural villagers connected with their neighbors and the rest of country. Yet electricity is available to only 2 percent of the people. The power infrastructure is at the mercy of the weather and outages occur daily, Bryan said. So charging phones and lighting bulbs in his family’s home also sparked an idea in William’s head: the same concept underlying the ubiquity of cell phones could launch an electric revolution in Malawi.

William wants to do with windmills what people do with cell phones: put these all across the rural areas and then they don’t have to depend on these ineffective [centralized power] institutions.

“William wants to do with windmills what people do with cell phones: put these all across the rural areas and then they don’t have to depend on these ineffective [centralized power] institutions,” Bryan said. Cell phones have caught on because they are cheap and towers cost far less than stringing landlines across the country. So Malawi leap-frogged over the landline phones and instantly adopted cell phone technology. William hopes it repeats the experience and skips centralized electrification and jumps directly to cheap, green power with windmills in every village.

Since his rise to fame, William finished the education that the famine interrupted so many years ago. He graduated from Dartmouth College with an undergraduate degree in Environmental Studies, then took a position as a Global Fellow for the design firm IDEO.org. William is an entrepreneur, TED Fellow, and has worked with the WiderNet Project. He also works with the Moving Windmills Project to establish the Moving Windmills Innovation Center in Kasungu, Malawi.​ In 2019, The Boy Who Harnessed the Wind was adapted into a film in which Chiwetel Ejiofor played William.

Bioethanol for Refugees: A Startup’s Plan for Weeding Lake Victoria

Looking out from the Kenyan shores of Lake Victoria, a green carpet of water hyacinth floats with the tides. The invasive weed clogs shorelines of Africa’s largest lake, preventing the passage of fishing vessels from the weed-choked bays to the deep water where they fish. “Our business is greatly determined by how best we can access and navigate the waters of the lake,” says Kevin Ochieng, a 33-year-old part-time teacher...