Agbogbloshie in Ghana is a vast urban area that houses a massive e-waste recycling dump. Situated on the banks of the Korle Lagoon alongside the Old Fadama slum, it is home to around 80 000 people. Back in the 1960s as Ghana industrialised, migrants flocked to Accra and settled in Old Fadama. Then, around the year 2000, ships started to come in with e-waste.

Today, many work at the “digital dumping ground”, sorting through technological products like washing machines, cookers, vehicles, cell phones and computers. These products have historically been sourced from higher income countries such as the US or those in Europe. But there has been a shift in where e-waste is sourced: domestically Ghana now produces its own e-waste, with imports being mainly made up of reusable electronics.

Agbogbloshie often receives bad press – it’s even been nicknamed “Sodom” after the Biblical city destroyed by God for its residents’ sins. Workers burn cables covered in plastic so they can get at the valuable copper contained in many digital devices faster. This contributes to air, soil and water pollution. There are also health risks involved – workers can inhale toxic fumes, and nearby contaminate food sources.

But I saw a different side of Agbogbloshie when I visited it in 2018. As an academic who researches e-waste, waste and the circular economy, I was struck by the site’s thriving hierarchical ecosystem of entrepreneurial activity. Everything had its place. There were dedicated spaces for dismantling and handling different waste streams, repair and refurbishment activities and weighing scales.

Agbogbloshie, and sites like it elsewhere in the developing world, provide a valuable service. They offer opportunities for job creation, profit and cleaning up environments littered with waste. These activities also give discarded goods a new lease of life, encouraging second-hand markets in electronic and electrical goods while recognising the skills associated with repair.

Worldwide we discard 44.7 million metric tonnes worth of electronics and electrical equipment. These devices contain materials that have a collective higher value than 120 countries’ Gross Domestic Product – in the region of Ghanaian cedis 333 billion or €55 billion. And, for every 1000 tonnes discarded, there is an opportunity to create 15 recycling jobs and 200 repair jobs.

Three steps could be taken to harness the potential of Agbogbloshie and sites like it.

First, formal recognition by investors, the government and the private sector. This would help to ensure a boost in funding; improved, safer infrastructure and healthier worker conditions. Second, there must be a focus on how to manage the flow of materials to and from e-waste sites. This is in line with the requirements outlined by the Basel Convention, which aims to control the movement of hazardous waste to protect human health and the environment. And third, the people working at similar sites could co-create new and relearn old practices. Knowledge sharing is key.

Some of the workers at Agbogbloshie told me that they didn’t tell people outside the immediate area what they did for a living. This was because their work was considered dirty. A local expert, Karim Saagbul, from Ghana WIEGO – which works to empower informal workers, particularly women – confirmed the stigma attached to this work. The organisation supports informal waste workers at Agbogbloshie. 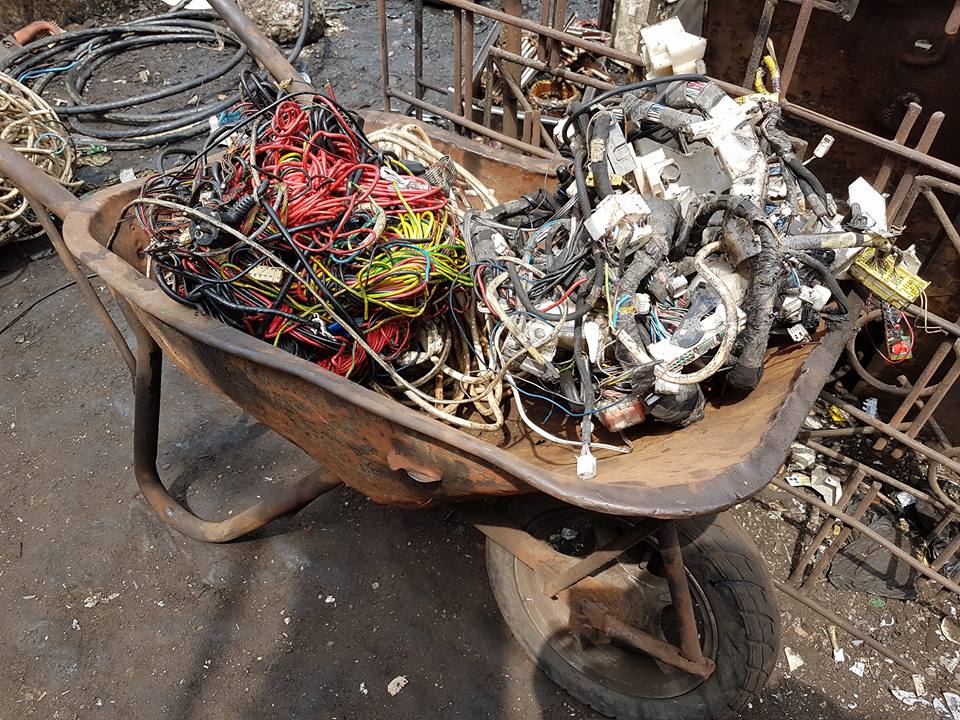 A wheelbarrow stows a jumble of wires. Plastic is burned off the wires to get at the valuable copper inside. Photo: Alison Stowell

There have been some calls for the work at Agbogbloshie to be recognised as legitimate and important for national development. This is crucial. Waste picking and repair work allows people to make a reasonable living, though they earn below the country’s average: monthly salaries range from $70 to $140 for a scrap collector to $1050 for middlemen who act as the intermediaries between the dealers and recyclers, which in turn supports the country’s economy.

There are also economic benefits to expanding the life span of products that might otherwise stay on the junk heaps. This appears to make sense to the German government: it has funded new e-waste facilities at Agbogbloshie in an ongoing effort to offer training in safer recycling practices; a hospital; and a football pitch for entertainment. This initiative aims to support the development of a more sustainable and inclusive e-waste management system that brings together informal and formal groups operating within this space.

Securing a reliable source of e-waste and second-hand electricals is a challenge both for developed and developing countries.

If you want to operate a refurbishment or recycling business, you need a supply of materials. If organisations engaged directly with the informal sector, they could be responsible suppliers of second-hand goods and secure valuable resources for their production processes. It is lucrative business as Ghana imports approximately 150 000 tonnes of second-hand electrical and electronic goods a year.

Due to the hazardous chemicals contained within e-waste products such as lead, cadmium, mercury, amongst others, the flows are governed by voluntary agreements and legislation. These policies would need to be revisited to ensuring the transportation and handling of goods was done in an appropriate manner but did not inhibit the flow.

Confidence in data security or destruction would also need to be considered, especially for data baring technologies like mobile phones, tablets and laptops; nobody wants to be at risk of identify or data theft. Engagement on this level could encourage goods for reuse to actually be goods for reuse, rather than those illegally traded or dumped.

Even with mature infrastructures, globally 1 million people die of occupational poisoning caused by chemicals in their bodies. That number is just the registered employees, the figure may be higher if the waste pickers and informal workers were to be included. So, working with established organisations, there is an opportunity to share safer practices.

Collaboration presents an opportunity to co-create new practices, or share and re-learn those that already exist. The youth-driven Agbobloshie Makerspace Place Project presents exciting opportunities for exactly this. It offers community makerspaces to educate, produce tools, design products and a digital platform to encourage the repair, recycling and new trades. The kiosks are put together by hand and welcome all.

Sustainable Building: Changing the Way We Look at Construction Materials

As the population heads toward 9 billion, pressure rises for more housing. Meeting the global demand, however, is more complex than simply building more homes and shelters. Why? Current housing design is highly resource intensive, which makes sustainable building challenging. While forms of housing and shelter vary across regions, they share two common functions: providing protection and reflecting the local context. The current housing design favors low-cost, easily assembled, and highly...

White Paper: The Future of Manufacturing and How to Train for it

The manufacturing industry is on the precipice of a radical transformation in the tools used in the trade. As the sector adopts “Industry 4.0”...