These Cell Phones are Not Technically Urine Powered

Recent headlines raised eyebrows at E4C when Bristol Robotics Laboratory announced that it had charged a cell phone with urine power. Did anyone else imagine a sari-wrapped Indian small business owner holding up her dead Nokia and asking, “you want me to do what to this?”

But a closer looks shows that these phones are not exactly urine powered, and the concept they are based on may have potential. The new device is a microbial fuel cell. It’s a urine-powered variant in which microorganisms feed on compounds in urine and generate electricity. When stacked in a series, the fuel cells have generated power to charge a smart phone just enough to send text messages, browse the Web and make a brief call.

Whether urine is the actual power source may be an academic distinction, and even the lead researcher behind this project doesn’t appear to make it.

“One product that we can be sure of an unending supply is our own urine. By harnessing this power as urine passes through a cascade of microbial fuel cells, we have managed to charge a Samsung mobile phone,” Ioannis Ieropoulos from University of the West of England, Bristol, said in a statement.

We are actually re-using waste to create energy.

As this technology advances, we could see bathrooms in the future that turn our waste into electricity and clean water. That could have advantages in both developed and developing countries, as Ieropoulos points out.

We’ve reported on microbial fuel cells before, but on kinds that don’t require urine, necessarily. Other versions feed their microbes manure and even ordinary garden soil. We have the garden variety in our Solutions Library. The technology is nearly 100 years old and it seems to be riding a new popularity bump in labs and start-ups.

How a microbial fuel cell works

Looking more closely at that decomposition, we see that bacteria in the soil or, in this case, urine and sewage, produce carbon dioxide, protons, electrons as they eat and metabolize organic compounds in the stuff around them. The fuel cell harvests those electrons. Bacteria in the (negative) anode chamber of the fuel cell spew electrons that zip across an electrical circuit to the (positive) cathode chamber. A membrane separates the two chambers, and it allows only protons to cross from the anode to the cathode. In the cathode, the electrons and protons combine. Two oxygen atoms in the cathode can take on a proton and an electron to become water. The difference in electrical potential (volt) between the anode and the cathode, together with the flow of electrons (ampere), generates electrical power (watt). And the waste material is water. The process continues as long as the bacteria have food. This page explains it with a diagram.

Ieropoulos and his team 3D-printed their urine fuel cells using a ceramic-polymer composite, RCP23 Nanocure resin with ceramic nanoparticles. They inserted carbon electrodes into each chamber. Then they experimented with configurations of eight cells to find what works. In the lab they used artificial urine that had a controlled amount of carbon for microbes to eat. As expected, the microbes generated more power when they had higher carbon urine to eat. 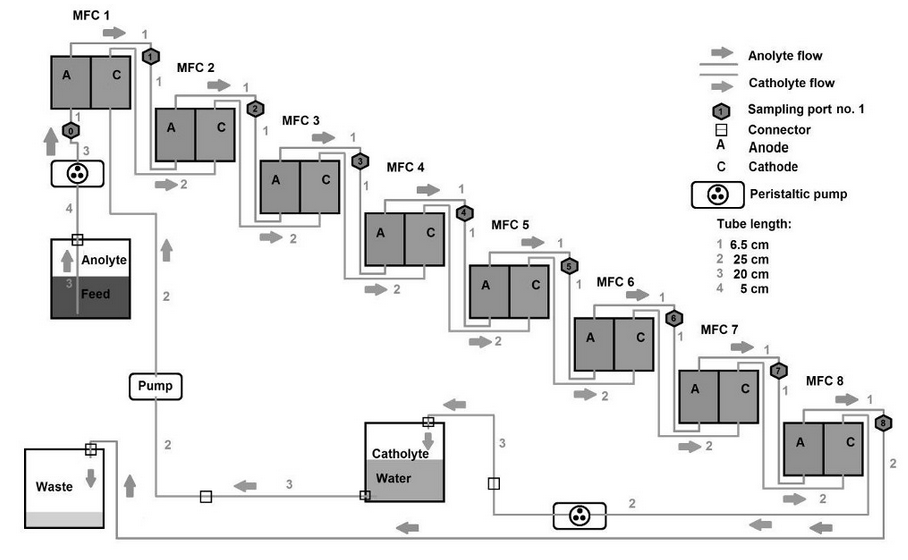 The Bill and Melinda Gates Foundation supports this work in part, and some of the stipulations for Gates grants are low cost and ease of manufacture in developing countries. When they leave the lab, these fuel cells will have to be cheap and practical enough to power bathrooms and devices worldwide. Ieropoulos says that scaling the technology is possible through miniature cells like his, which are two milliliters. And combining lots of them to work together could produce useful amounts of power.

He fields questions about their power output and potential to treat urine and produce clean water on this online forum at the Sustainable Sanitation Alliance.

“The concept has been tested and it works – it’s now for us to develop and refine the process so that we can develop MFCs to fully charge a battery,” Ieropoulos says.

The supply of critical materials has emerged as a theme in the transition to clean energy. The manufacture of electric vehicles, solar photovoltaic panels and wind-power generators requires more minerals than their equivalents that consume fossil fuels. The critical minerals needed include copper, lithium, nickel, rare earths, silicon and others. The issue raises questions regarding the feasibility and speed of energy transition, the economics and the geopolitical consequences. Strategies exist...