Wanted: An easy test for bacteria in drinking water 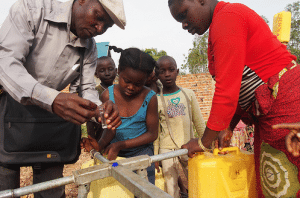 Foster Mukendi, an Oxfam public health engineer, tests the water quality at a tap stand in Bunia, a town in the Democratic Republic of the Congo. Photo by Caroline Gluck / Oxfam<

Updated December 13, 2013
This post began as outreach to crowdsource an answer to the question of how to quickly test drinking water for bacterial contamination. Now it is a growing repository of new and proven water testing options.

When bacteria is suspected in a water supply, is there a quick, easy test for trace amounts that might persist after filtration? Bacterial water contamination can include salmonella, E. coli and the microbes that cause cholera, dysentery, typhoid fever and others. Considering the nearly 1 billion people worldwide who lack access to an improved water supply, this question is important.

One of the most common ways to test for bacteria is to culture the water sample in a vial with a chemical reactant. The process can take up to 48 hours. Some companies test samples sent in by mail, which is one of the cheaper options. But it is more time consuming.

Field kits with temperature regulation can culture and test samples, also. But intermittent power supplies in Los Toros might disrupt the process.

We asked the experts in our network for other options. We’d also like to include your ideas and those of the E4C community: If you post your favorite method in the comments, we’ll highlight them up here.

An international research team at three universities in the United States and Great Britain have conducted a comprehensive survey of 44 drinking water tests for use in developing countries. Their costs range from $.60 to $7.50 (but, they warn, those prices may reflect only a small part of the overall cost).

Thanks to Robert Bain, a visiting scholar at The Water Institute at the University of North Carolina at Chapel Hill for bringing this to our attention.

Thanks to Jodi Gentry, an environmental health professional and member of E4C’s Linked In group for finding this resource.

And the Canadian Centre for Affordable Water and Sanitation Technology in Calgary, Alberta, has issued this Drinking Water Quality Testing Manual, freely available online. The manual includes an appendix that lists recommended products.


The Aquagenx Compartment Bag Test detects E. coli in drinking water. It is a clear plastic bag divided into five compartments, each of which contains a chromogenic growth medium for E. coli, which is food that changes the water’s color as the bacteria eat and reproduce. If E. coli is in the water, the water turns blue. If all five compartments are blue the water is unsafe to drink. If some but not all are blue, the water is questionable and there is a chart to look up its relative safety.

Mark Sobsey and his students at the University of North Carolina spun off Aquagenx as a private company to sell the test. Now Aquagenx has deployed the test on the island of Samar in the Philippines to help survivors of Typhoon Haiyan.

“We will be working with local government and other key officials with whom we have made contact. We are bringing training materials in order to train local workers to use the test, in the hope that they will be able to continue to test water regularly as part of the relief and recovery effort,” Sobsey says. 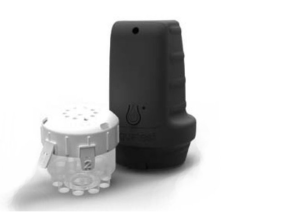 The Aquatest device is one of the few developed specifically for low-resource settings and developing countries. PATH, the international global health non-profit organization has worked with the University of Bristol in Bristol, Great Britain, and a consortium of other institutions to create Aquatest.

“It provides users with actionable information on water contamination levels, taking reliable quantitative water testing out of the lab and direct to the water source – without huge cost or effort,” according to the Aquatest site.

Thanks to @PATHTweets for bringing this to our attention via Twitter. 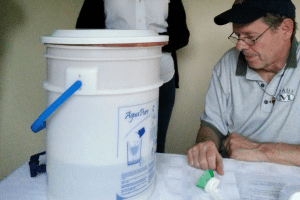 Ned Breslin, CEO of Water for People, told E4C that he would look to three companies: DelAgua, HACH and Nalco (an EcoLab company).

DelAgua: DelAgua’s Single Incubator is a portable bacteria-testing system designed for use in the developing world. It has optional battery power, which could be a solution for unreliable electrical grids.

“The kit was designed to help provide information about the safety of water supplies in difficult situations or remote areas where laboratory facilities do not exist,” according to DelAgua’s site.

The kit also tests for turbidity (dirt and other particles in the water), chlorine and Ph. And, with a conductivity meter sold separately, it can test for salt and sewage contamination. Other add-ons can test for chemicals that might be known to contaminate water locally wherever it is used.

HACH: HACH has a number of options for bacteria testing. One is the CEC-2 Chlorine, Coliform, and pH Test Kit, which can incubate and detect coliforms. If coliforms are present, the assumption is that they are sharing the water with other potentially harmful bacteria.

Another option is the Direct Read Environmental Lab (DREL). The DREL 2800 Complete Water Quality Lab may be a bit of overkill, but it is designed for durability and on-site testing.

Nalco: Nalco offers a range of analysis products from color-change kits to lab equipment. We’ll post updates as they come in. 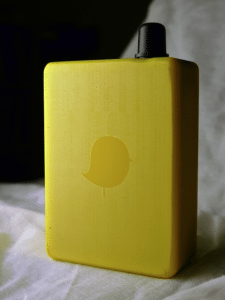 By the end of the summer, Sonaar Luthra, the creator of WaterCanary, may have a solution for Bennett. WaterCanary is a water-testing device that networks with other WaterCanaries in the region to provide real-time water quality data.

The device requires electricity, but it tests water instantly without the need for incubation. There is also no need for consumable color test strips or other reagents, which can be difficult to stock, Luthra told E4C.

The goal, Luthra says, is to create “a single handheld device that can test thousands of samples with virtually no recurring cost, much in the same way that a digital camera requires no film.”

WaterCanary will undergo testing over the summer, and afterward Luthra plans to release the hardware as open source. He hopes that engineers, hackers and citizen scientists will build their own devices and improve upon the design.

Mapping monthly water availability in basins that cross country borders found 1.6 billion people worldwide who live with severe scarcity for at least one month out of the year. Nearly one billion people experience severe water scarcity for 3-12 months each year, and 13 basins between countries suffer severe water scarcity every month of the year, according to findings published February 2018 in Nature. “We did the research in order...