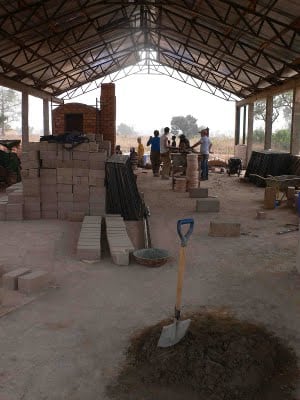 With enough clay, rice husks, plastic buckets, time and training, Susan Murcott believes we can provide clean drinking water for the one billion people in the world who don’t have it. Murcott, an MIT engineering professor, took a step closer to her goal this year with the completion of a ceramic filter factory in northern Ghana.

Two hundred filters per month roll out of the factory to serve the 1.5 million people in the region who drink contaminated water. Globally, they represent only a drop in the bucket, but Murcott says that water filtration is an idea that could go viral. (See a field-tested ceramic filter design in our Solutions Library.)

“The reason to build a factory and the other small-scale work I do is because I see it has potential to reach a billion people,” Murcott told E4C. “With more awareness brought to the issue, there’s the possibility that we could bring safe water in our lifetimes to a billion people.”

Waterborne disease causes 1.5 million deaths per year wordlwide, the CDC reports. And most of the deaths are among young children. Microbes in water cause diarrhea, malnutrition, organ damage and skin infections that kill and maim people, and keep them home sick from school and work.

Murcott has dedicated her life’s work to fighting those diseases through education, improved filter design and manufacture. In 2005, she founded Pure Home Water in Ghana. The non-profit organization promotes ceramic filters produced at a factory in Accra, the country’s capital. That factory, and her own, both produce filters based on a design by Fernando Mazariegos, a Guatemalan chemist. Later, Ron Rivera, of the US- and Nicaragua-based Potters for Peace, ran with the design and helped promote and produce it in dozens of countries worldwide.

Murcott and her MIT students are among the first research teams to study the filter. They have tested its performance, materials and the design, and tweaked the shape to improve it. The original filters look like a terracotta flower pot with a flat base, and that design is still in production. The MIT team rounded out the base to give the filter a parabloid shape. The shape slows the rate that water flows through the ceramic, allowing the filter more time to trap contaminants.

The basic design hasn’t changed much since Mazariegos fired his first filters. They consist of clay mixed with a combustible material–sawdust works, and rice husks may work better. In the kiln, the sawdust or rice husks burn away, leaving tiny pores in the ceramic through which water filters.

As you might expect, Murcott and her students have left a staggering paper trail documenting their work on the factory and on the filter design. The students also kept travel blogs, photos and videos from three years of work in Ghana and around the world.

The online record is both a lesson in filter engineering as well as an interesting and sometimes moving account of students’ first brushes with a foreign culture. Here’s a glimpse of an afternoon at work on the filter factory from Zac D’s blog.

Girls hold glasses that show how water looks before filtration and after. Photo credit: Alex Nisichenko

Almost immediately after the herd passed through, Manny showed us the dugout where the local villagers fetch water. Dugouts are depressions that collect water; this is the common water source for rural Ghanaians. As you might imagine, the water is very dirty. Walking to the dugout across the plains with cattle surrounding us and the sun setting felt like a scene out of The Lion King.

In Ghana, women (and girls) are responsible for fetching water for the household.  When the girls got to the dugout, they loaded probably 50 pounds of water in each of their buckets and then carried it back to their village (probably a mile away) on their heads.

Then there’s Cash Fitzpatrick’s fascinating video of a fire festival (below), which he recounts in nervewracking detail.

They also pack pipe-bombs which they detonate off the trail while everyone is yelling to heighten the effect. Everyone is screaming and running around with torches, and I admit to feeling more than a little uneasy when I was separated from the group and found myself among the village warriors, who were all armed and yelling. I didn’t really have anywhere to go either because there were large fires on either side. All the heat and smoke made it pretty hard to see, and I had to keep a close eye on my torch because it burned fast. A lot of men were pretending to slash each other with the cutlasses or shoot at one another with guns.

Since she began work in Ghana in 2005, Murcott has helped sell 16,000 filters that serve an estimated 100,000 people in the country. That’s a far cry from one billion, but Murcott isn’t finished. We asked her what are her plans this year and she said she’ll finish the academic semester then hop on a plane to Ghana.

Editor’s note: This is the second in a two-part series about lessons learned during Safe Water Network’s experience household connections for water supplies in Ghana. The first article outlines a protocol for plumbing installation: Recommendations for Installing Household Water Connections in Ghana. This second article maps a path to financial sustainability. Convenience drives water sales in Ghana and India. Other factors play a role, but convenience is key. That’s our conclusion...

Water was the theme among the winners of the US division of the American Society of Mechanical Engineers (ASME) Innovation Showcase (ISHOW) 2022. Innovations...