This report is available for full download to pdf.

The project report addresses the awareness, use, and barriers to adoption of Evaporative Cooling Technologies (ECTs) in the Embu and Machakos Counties of Kenya. The goal of this project was to identify the level of awareness that farmers have of evaporative cooling technologies, barriers to adoption, and ultimately, to generate design and dissemination recommendations, which will improve the user experience. Providing a cool and humid storage environment for harvested produce is key to increasing produce shelf life. Conventional cooling options, such as the use of a refrigerator, have shown to be effective, however, these technologies may be out of reach for most smallholder farmers due to the high cost and need for electricity. This situation calls for development and dissemination of alternative postharvest storage options.

Evaporative Cooling Technologies (ECTs), such as a charcoal and brick cooling chambers or Zeer-pots, have been shown to be affordable to construct and operate; however, adoption of these technologies has not been widespread. This study sought to determine both the reasons for use and factors which hinder adoption of ECTs. Data were collected through a structured questionnaire administered to 81 mango farmers in two contrasting agroecological zones. Data were analyzed to determine the correlation between demographics and farmers’ knowledge and awareness of postharvest cooling technologies. The findings reveal that most (58) farmers are aware of at least one type of cooling chamber and most of those who use either a brick cooler or charcoal cooler belong to a cooperative farming group, indicating the strength of cooperative movements. The respondent’s education level and access to training and extension services influenced use of cooling storage, indicating the need for education of benefits for the use of cooling storage. The widespread adoption of cooling technologies would help reduce food losses all along the value chain, contributing to the achievement of the United Nations Sustainable Development Goal #2: Zero Hunger.

Among the farmers that participated in this study, 73% are aware of ECTs, and among this group 56% use at least one ECT. A majority of the respondents (58%) in this study belonged to a farmer group or cooperative. Membership to a farming group was the greatest determinant of awareness and usage of ECTs. All of the respondents in this study that are users of ECTs are members of a farming group, and the ECTs used were located at central locations and owned collectively by the farming groups. Having access to agricultural extension services and attending trainings related to mango farming also strongly correlated with farmers adopting ECTs. Among the non-users who were aware of ECTs, the reasons attributed to lack of adoption included high cost of acquisition and maintenance, lack of information, lack of access to ECTs, and a lack of need for storage to extend shelf life. None of the respondents individually owned an ECT, and the ECTs being used in both study areas were built with the help of government and non-government agencies, which is indicative of the cost barriers that must be overcome. Despite the barriers to ECT adoption, farmer groups who owned ECTs indicated that they benefited from their use, improving shelf life and reducing losses, increasing the time to look for markets, and increasing prices for their produce. 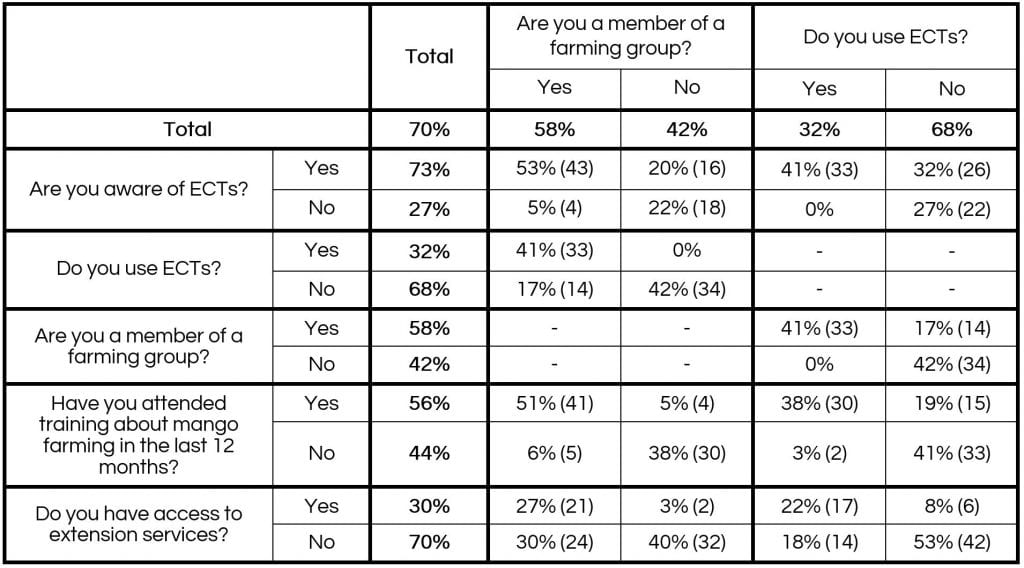 Correlations between awareness of ECTs, membership in cooperative farming groups, attendance of trainings, access to extension services, and use of ECTs (Table from full-length report).

Based on the results of this study we recommend that the adoption and effective use of ECTs can be increased by taking the following actions:

– Inform farmers of ECTs and their benefits, and provide training and support to ensure proper use and adoption. This can be done through seminars, farmer field days, and demonstrations for both group members and non-members.

– Leverage farming groups as pathways for disseminating ECTs. Emphasis should be placed on the important role of groups in accessing new and improved technologies as well as information access and the ease of accessing other services and privileges of being a member of a framing group.

– Increase access to extension services – both private and public – in order increase information availability of agricultural best practices in general for both group members and non-members. Extension agents can help gather information on what technologies are of the most interest and can provide the greatest benefits to farmers in a specific region.

Our news staff went on vacation for most of this month and put the Tweet Roundup on a temporary hiatus. We’re back and digging through tweets to highlight interesting news on technology for international development. These are a few of the stand outs. For up-to-the-minute updates from E4C on Twitter, please follow us at @Engineer4Change. Africa’s largest #solar photovoltaic plant opens with great expectations to boost development http://www.siliconrepublic.com/clean-tech/item/32353-africas-largest-solar-phot … via...