10 Ways to Put Human Waste to Use

It was hard to limit the list to just ten. With a mix of proven technologies, award- winning prototypes and an eye-catching entry at Maker Faire Africa this year, we present ten ways to put poop and pee to good use.

Four young Nigerian women ages 14 and 15 made interesting headlines when they debuted their urine-powered generator at Maker Faire Africa in Lagos this month. The device uses electrolysis to separate hydrogen from the water in urine and then fuels a generator with the gas. Water might work just as well, but saying your phone charged on urine just makes more of a splash, so to speak.

If 40 percent of the people in India stored their urine to use it on their crops, the country’s farmers could save $26.7 million (1.2 billion rupees) in fertilizer expenses, Sridevi Govindaraj calculated when she completed her doctoral thesis in ecological sanitation at the University of Agricultural Sciences in Bangalore. Incidentally, she may be the only person in India with a doctorate in ecological sanitation.

Our bodies make about four to eight cups (one to two liters) of urine per day, and it’s rich in nitrogen, potassium and phosphorus, the same elements that crops love. It’s also pretty cheap to make. Urine, Sridevi told E4C, is a useful resource.

NASA is developing a complex, expensive and, as it turns out, somewhat buggy machine that purifies human urine to recycle the water for astronauts to drink. Rex Walheim, a NASA mission specialist, tests the Forward Osmosis Pump Syringe in the photo, injecting a colored “Challenge Liquid” into the Forward Osmosis Bag on the middeck of the Atlantis.

It may be much easier to purify urine for drinking here on the ground, however. We’ve heard of the theory that drinking urine has health benefits, and fresh urine can be sanitary (although it could pick up pathogens on its way out of the body if the person has a disease). But for the select few who are trapped in a desert with no water and can’t stomach the thought of drinking straight urine with no chaser, we suggest making a solar still. The still uses the sun’s radiation to evaporate water from the urine, collecting the condensate on a surface, such as plastic wrap, and channeling it into a container to drink.

Black soldier fly larvae thrive in feces, and after processing, they make for nutritious farm animal and fish feed, and also biodiesel. A research team at the London School of Hygiene and Tropical Medicine is looking into how to raise them in central facilities on a diet of waste collected from latrines. An earlier, alternate version of the plan is a fly-catching latrine that lures the pests in but prevents their escape, turning the latrines into fly killers and possibly even larvae producers.

Simple, effective toilet designs like this one, the CRAPPER, are more likely than more expensive devices to become the “toilet of the future” that serves the developing world, Jason Kass says. Photo courtesy of Jason Kass

Composting latrines turn a sanitation problem in an agricultural solution. In fact, Jason Kass, founder of Toilets for People, recently called a variant of a composting latrine the “toilet of the future,” in a guest column for E4C.

The basic ecological composting latrine design is two pits, one covered with a semi- mobile structure that is the actual toilet and walls. You mix the human waste with materials such as ash and yard clippings or agricultural waste. When the pit is full, you move the structure to the second pit, cover the first and let natural bacteria and the animal agents of decomposition do their work. When the waste is naturally processed, dig up the compost and spread it as a safe fertilizer on crop fields.

Variations of the design collect the waste in removable drums for off-site composting. Toilets for People and SOIL are two organizations promoting this method in Haiti.

Rural Bolivia has a toilet shortage. Fewer than half of rural Bolivians have regular access to a toilet, according to the World Health Organization. But with such scarcity, by definition toilets are strange, foreign objects, and many people there are not inclined to try them out. Aid organizations have given away composting latrines to communities in the region, but studies show that only one-fifth to half of them are used correctly. Instead, people defecate on the open ground. To entice better use of the free toilets, Water for People is experimenting with a composting business venture. Compost from correctly used latrines is spread on reforested land planted with Monterrey pine saplings. The pine trees provide a habitat for expensive bolete mushrooms, which can generate relatively high incomes for the communities.

We see evidence of some creative problem solving in that experiment, but the general concept of cashing in on compost is not unique to Water for People. SOIL and other organizations, some mentioned here and elsewhere on E4C, are also turning poop into profit with some encouraging results.

Not to leave out number two, an example of the fertilization powers of urine is an odd experiment in raising watercress. A Web page that is enthusiastically named drinkpeedrinkpeedrinkpee offers a kit and a how-to guide to growing (supposedly) edible watercress in a bowl full of urine.

One of the gases that lends human waste its stench is methane, which, as 13-year-old boys with matches worldwide must know, burns. A biogas digester collects methane as microbes produce it inside a closed container (oxygen can be deadly to microscopic methane-producers). With the right equipment, gas channeled from a container of waste could generate electricity, heat water for homes and industry and cook food on a gas range. Sanergy, the organization behind the useful bicycle modification that converts it into a latrine pump, also promotes biogas production from waste collected from urban communities in developing countries. 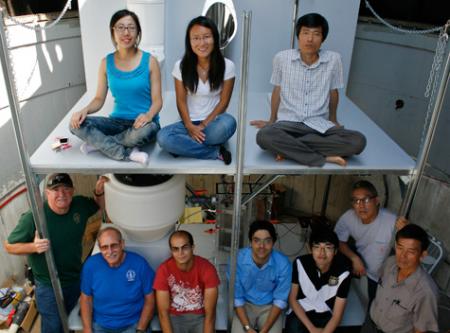 Michael Hoffmann’s Gates Foundation award-winning toilet prototype uses solar power to break human waste into hydrogen gas and leftover solids. Hoffman and his team at Caltech showed how the toilet could store hydrogen in fuel cells as an energy source. The toilet treats waste on the spot and syphons off hydrogen for later use as energy.

Generate power on the spot

In a unique variation of biogas production from human waste, researchers at Delft University of Technology have worked out a way to produce synthetic gas – “syngas” – which is a mixture of carbon monoxide and hydrogen. Their Gates Foundation award- winning design dries the waste on the spot and zaps it with microwaves to heat it into a plasma for gasification (all proprietary technology). Then the toilet stores the gas in a solid state fuel cell stack to produce electricity.

The design is affordable, the researchers say. Like other prototypes on this list, we mention this as a point of interest while we’re waiting to see if the end products are also practical. No photo is available.

Debunked: Do not treat this sting with urine. Photo by Keithius / Flickr

False. It turns out that urinating on a jellyfish sting will do little to alleviate the burn and could actually exacerbate it. Thanks to Scientific American, About.com and other sources for this important expose. This new information raises a question, though: If it doesn’t work, then who spread this rumor to begin with?

Burn it as fuel briquettes and biochar

With the last use debunked, we’d like add a final use for human waste: Fuel briquettes. Not compost, not biogas or hydrogen fuel cells, but actual, burnable fuel made from treated human waste. Researchers from the University of Colorado in Boulder won a Gates Foundation grant to develop a solar-powered toilet that turns waste into biochar.

And researchers from RTI International in North Carolina won a Gates Foundation grant for their toilet design that converts waste into fuel briquettes that it burns for storable energy. It also churns out treated, but non-potable, water.

We came across other uses for human waste: Urine has been used as a disinfectant, invisible ink and dye for cloth, and both urine and feces are necessary to diagnose certain illnesses and parasitic infections, for example. If you have other tips on how to put waste to use, please share in the comments below.

Fourteen hundred years ago, a civilization called the Wari built a system of canals to bridge seasonal droughts in what is today’s Peruvian Andes. Rainwater diverted through the high-altitude canals percolated through the Andean rock and soil to reemerge weeks later in communities at lower elevations. As perhaps a recognition of the life-giving necessity of water, the canal networks are called ‘mamanteo,’ Spanish for ‘suckling.’ Peruvian water authorities have eyed...

The La Toma community and others in southeast Colombia have mined gold by hand for hundreds of years, artisanal mining that, until recently, had...