A newly designed sorghum press is under construction in Mali

The women in Dissan, in southern Mali, turn a hand-cranked press to process the sorghum harvest. They first wring the juice from the stalks and then they boil it to make a sweet, nutritious syrup. Sorghum is a hardy, drought-resistant crop that thrives in the land-locked West African country, and its syrup commands a higher market price than the raw material.

The women have used the same hand-powered models since 2008, built with the assistance of a team from Engineers Without Borders – University of California, Santa Barbara. Now, they got an upgrade.

Kelly Lin and a team from UCSB have finished and tested a faster manual press, and it has been built in Dissan.

The new press processes the sorghum stalks at about 25cm per second (10in /sec), which is more than three times as fast as the first model. And, at about $500, it costs nearly the same. 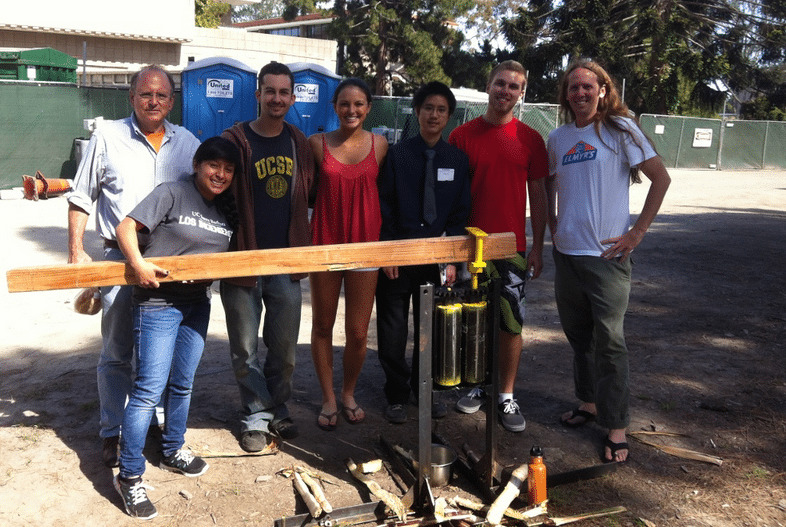 There are other sorghum presses on the market, even hand-cranked models (like this one) that work where electricity is unreliable. They cost more, however, at about $800 or more, depending on the model and the suppliers in Mali.

That was important to its designers, and it’s one of the things that sets this project apart from the “drive-by development” projects that are notorious in African communities. (Nathan Johnson at HOMER Energy in Boulder, Colorado, commented thoughtfully on the scourge of drive-by development in a recent interview.)

The press in action

So, how does it work? You can see for yourself in the video clip below. And we’ll let Lin describe it as he told it to us: “There is a lever arm which the user pushes in a circle. The lever arm drives gears that drives two rollers. Another user feeds the sorghum stock in between the rollers. Then the roller squeezes the juice out of the sorghum and the juice drops down into a bucket.”

Lin and the UCSB team have made the sorghum press construction manual available free of charge. The hope is to see other communities build their own, similar presses, Lin says.

Few have experienced the unique blend of pains and joys that afflict designers of technology for developing world applications. Now, a hands-on simulation offers that sweet frustration in practice. Four experts in global development technology have created an open source toolkit that provides digital resources for leading a workshop; it immerses unsuspecting participants in the entire development innovation process. The simulation challenges participants to solve a problem with, and for,...