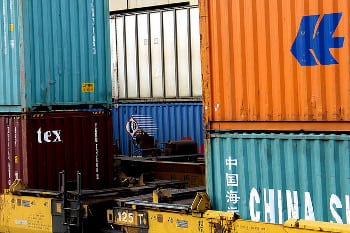 These could house future hydrogen bioreactors that run on organic waste. Photo by jekemp/Flickr

This innovation is one of ourPromising Prototypes of IEEE’s Global Humanitarian Technology Conference in Seattle Oct. 30 – Nov 1. For more in the series, please see below.

Shelter, food, water, power and waste disposal are among the basic needs that emergency response efforts provide after a disaster. They can also be chronically scarce in some impoverished communities. A new modular energy production facility in a shipping container could meet three of the five: electricity, waste treatment and water. It may also provide heat for buildings. A team at the Energy Efficiency and Reliability Center in Purdue University, Calumet campus in Hammond, Ind., has laid groundwork for the facility. They began with microbes.

The Purdue team is developing a modular system that converts organic waste into hydrogen and fertilizer. Anaerobic bacteria will convert the sewage, crop waste and animal dung to hydrogen, and the leftovers will be sterilized and spread on fields. If that sounds similar to a methane-producing biodigester, that’s because it is. Hydrogen, however, is easier on the climate than methane, which is a powerful greenhouse gas. Burning methane can also produce sulfur, carbon dioxide and other pollutants. Hydrogen power generation produces only water as a by product.

Predictably, however, producing hydrogen is more complicated. First, the system has to heat the organic waste to kill the methane-producing bacteria. The Purdue team solved that problem with a solar collector on top of the facility. They tested a vacuum tube system as an early prototype, and found that it reached 120C. At those temperatures, the solar collector may produce enough excess heat to distill water for drinking and heat buildings. The facility, when finished, will not produce electricity as efficiently as fossil fuel generators. But, the researchers write in their presentation at GHTC, when taken together, all of the tasks it performs give it an edge over traditional generators.

A working prototype is still pending, but the researchers have begun testing bacteria in different types of waste at different concentrations. In the next phase, they will build a bench-top bioreactor to continue tests, and then a working prototype.

Two years ago, a small team from the Lawrence Berkeley National Lab in Berkeley, Calif. released an enormous volume of research highlighting 50 potentially game changing interventions for the field of global development. The CEO of the lab’s spin-off organization, the Institute for Transformative Technologies (ITT), Shashi Buluswar told a group at last year’s Social Capital Markets conference that the two-year intensive research project began with a simple question: what...