The Development of Ukweli Test Strips 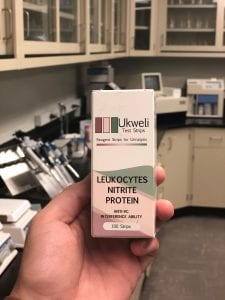 In 2015, researchers at Penn State noticed a curious way that some rural communities in sub-Saharan Africa were screening for diabetes. People would urinate on a flat rock, then monitor it to see if ants were attracted, indicating higher levels of glucose in the urine. This intuitive urine test inspired the research team to develop a urinalysis test strip for diabetes. They called the test, and the brand launched from it, Ukweli.

Since then, Ukweli has moved to Lehigh University, and its product has changed slightly. The test started as an inkjet-printed strip, and now it is produced by an original equipment manufacturer that screens for urinary tract infections and preeclampsia.

With urine analysis being used in various forms for centuries, the true innovation in Ukweli is not the technology itself, but rather in making them accessible to the last mile. Ukweli now focuses its efforts in Sierra Leone, with the goal of lowering the highest country-wide maternal mortality rate in the world.

Ukweli’s original vision was to create a low-cost diabetes and UTI test strip through the use of inkjet printing. The main goal was to ‘hack’ an inkjet printer and print assays onto coffee filters to create our strips. With reagent printing having been evaluated before on desktop printers, the team found this method as a viable option. However, the inkjet method proved to be inconsistent in reagent distribution on the filter paper, and the printing process was rarely reliable. Ukweli decided to move to a more reliable and cheaper method of strip production.

Ukweli’s first year at Lehigh focused on a hand stamping method. With this process, the team looked into using a rubber hand stamp to press test reagents onto filter paper. The goal of this process was to eventually have our partners in Sierra Leone recreate this process, thus allowing for the manufacturing of the test strips to be completed within the same border that they were used. However, the hand stamping method was deemed too difficult to scale up to the point where large number of strips could be produced. Therefore, Ukweli continued looking for other options.

After the hand stamping idea, Ukweli turned their focus solely on UTIs. Ukweli had established communications with Wangcheng, a biomedical device manufacturer located in Jilin, China, and determined that they would be able to produce a urinalysis test strip for approximately $0.02 each. Ukweli was able to determine what assays would be used on the strip with minimal testing. Using the available information, Ukweli was able to order test strips through Wangcheng that were tailored to the exact specifications the team desired.

Ukweli looked into the addition of preeclampsia to their test strip in the spring of 2019, after the team’s faculty advisor, Khanjan Mehta, was told about the issues this condition poses in West Africa during a trip to Liberia. After investigating this topic, Ukweli determined that preeclampsia was an issue that needed to be addressed in Sierra Leone, and worked to include preeclampsia into their test strip. Similar to UTIs, information regarding parameters that identify preeclampsia are widely available, allowing for the team to determine what should be added onto the test strip without extensive testing. Wangcheng was once again able to meet the requirements of Ukweli, and produced what is now the current test strip being produced: a three-parameter device that includes leukocytes and nitrites assays to screen for UTIs and a proteinuria assay to screen for preeclampsia.

As a developing nation with a struggling healthcare system, Sierra Leone often cannot provide proper storage for medical devices. Therefore, lab testing has been conducted throughout the life of the venture to determine how well the strips hold up against various environmental conditions such as heat, humidity, and light exposure. Through the use of heat and humidity incubators and sunlight-mimicking lamps, the team was able to expose different sets of strips to conditions similar to those in Sierra Leone. After conducting various tests, the team had found that after either 24 hours of exposure to 35 degrees celsius, 12 hours of exposure to 55% humidity, or an hour of exposure to sunlight, the quality of the screening for the UTI parameters was diminished. However, even at longer exposure to more extreme conditions, the quality of the preeclampsia assay was unchanged.

Ukweli is now in the midst of a campaign to raise funds through a crowdfunding platform hosted by Lehigh University: lehighcrowdfunding.com.

And see details about the Ukweli venture at their website: wordpress.lehigh.edu/ukweliteststrips.

Zach Day is a member of the Ukwel Test Strips team, pursuing undergraduate degrees in marketing and finance at  Lehigh University in Bethlehem, Pennsylvania.

Higher education in Tunisia lags in attracting young students and fails to retain skilled individuals who can contribute to the development of their homeland. Like many other Tunisians, I chose to pursue higher education in Europe and eventually started working there. The situation is improving, but more opportunities at home in Tunisia are needed for higher education students. Especially in the areas of social innovation and entrepreneurship. While living in...

From ultrasound on a mobile phone to robo-calls for fortified wheat: the STI Forum delivered innovation for sustainable development. Tiny startups shared time with...