With the population on the rise, the world’s waste stream has become increasingly difficult to manage. But waste-to-energy schemes may represent promising waste management solutions. These  technologies convert human, municipal, biomass and other waste into usable energy.

Engineering for Change’s Research Fellows have worked to understand some of the waste-to-energy products and processes over the past few months. Below we highlight four types that are in operation now: wastewater treatment, anaerobic digestion, incineration and microbial fuel cells. And, as a bonus, we have included a summary of two other widely used methods at the end.

Conventionally, wastewater is treated through several steps including screening, primary clarification, aeration, biofiltration, secondary clarification, disinfection, and incineration or anaerobic digestion of the resulting fecal sludge. The incinerated ash may be sent to a landfill or mixed with cement to make concrete. The digested sludge may be used as a fertilizer or sent to a landfill.  Without the ability to maintain these capital intensive treatment plants, municipalities in emerging markets often discharge wastewater into natural water bodies, affecting both the surrounding environment and human populations downstream.

While these municipalities grow and develop the capacity to run treatment plants, promising companies such as Pivot Works and Janicki Bioenergy have found ways to extract energy out of low solids human waste streams. 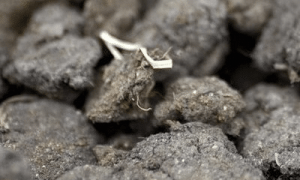 Pivot Works has developed a processing method to increase solids content (a concept that is depicted below).

The process employs a belt filter and mechanical dewatering machine followed by greenhouses for solar drying and a thermal dryer for sanitizing and homogenizing the form factor of the finished product (shown above). Pivot’s solid fuel is sold to industry plants to displace fossil fuels. If proven scalable, Pivot may be an interesting and affordable way for municipalities to discard their wastewater.

In collaboration with the Bill and Melinda Gates Foundation and their Omni Processor concept, Janicki Bioenergy has developed a fecal sludge processing technology. The Model S200 uses process heat to dry the fecal sludge, combusts the sludge, heats a boiler, which then provides steam for a reciprocating piston steam engine that connects to a generator. Janicki is able to both produce electricity and condense out water vapor from the system.

If Janicki Bioenergy is able to grow and establish several pilot sites, the technology may be an effective way to generate both potable water and electricity while improving sanitation conditions. 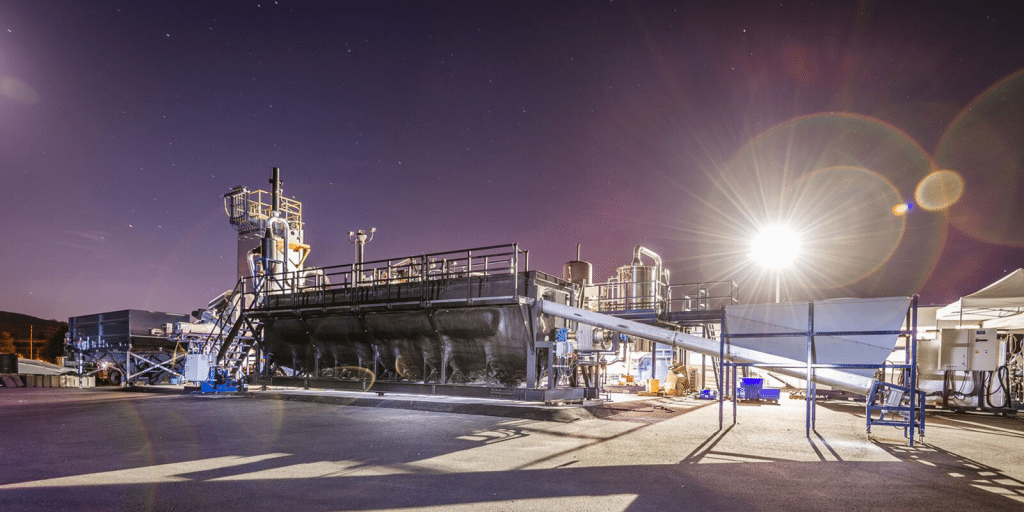 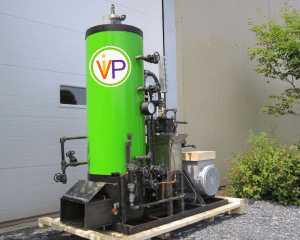 Incinerating waste produces ash, flue gas and heat. The heat can be used to produce steam to turn a turbine or power an engine for mechanical power, in which either can be coupled with a generator for electrical power. Incineration varies widely in scale and fuel source.

A large source of fuel for incineration systems in emerging markets is residual biomass. Agro-processing of crops often leads to residual biomass that accumulates into large mounds and piles like these coconut husks.

Instead, the waste can be viewed as an opportunity and fuel. Village Industrial Power (VIP), is capitalizing on this idea and has developed a biomass steam engine that can use both conventional solid fuels and residual biomass, such as palm oil kernels and coconut husks.

Superheated steam enables a dual-acting piston to turn the shaft of a generator or can alternatively provide mechanical power. VIP’s system provides the capability for thermal energy use as well. Currently focused in Africa, VIP can have worldwide impact in agro-processing communities if the company can manufacture on a large scale. That would drive the price down and accessibility up.

Find VIP and comparisons to similar technologies in E4C’s Solution Library. The company also has an appearance in the Spring 2016 issue of ASME Demand. 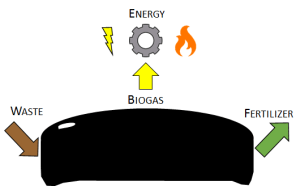 Anaerobic digestion (AD) is the breakdown of organic material by micro-organisms in the absence of oxygen. AD produces biogas, a methane-rich gas that also contains carbon dioxide with trace amounts of other gases; and digestate, a source of nutrients that can be used as a fertilizer, shown below. Biogas can be used as a fuel, for injection into a natural gas pipeline, compressed into vehicle fuel or combusted to generate heat and electricity.

Almost any organic material can be processed with AD, however, if biogas production is the aim, the more digestible the material, the higher the possible gas yields. Feedstocks generally include livestock manure, food waste, wastewater solids and various other organic waste streams. The digestion process begins with bacterial hydrolysis of the input material in order to break organic polymers into smaller molecules that finally become methane and carbon dioxide after acidogenesis and methanogenesis.

Anaerobic digesters can be designed with different configurations that depend on the structure (fixed vs. flexible), the temperature conditions, the portion of solids and the number of stages in the processes. AD also occurs naturally in landfill sites, but more slowly than in specially designed digesters. Landfill gas is released into the atmosphere if no controls are put in place.

Anaerobic digesters are most common on or near farms. Six to eight million family-sized, low-technology digesters are used to provide biogas for cooking, heating water and lighting fuels with varying degrees of success. Many AD technologies are already included in E4C’s Solutions Library, among them are the promising companies Flexi Biogas and Sistema Biobolsa. 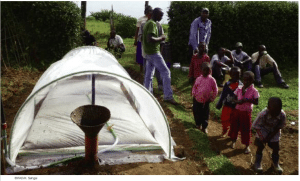 Flexi Biogas sells domestic digesters in Kenya, with digester maximum capacities of 5.5m3. The product itself, Flexi Biogas BG5, includes four key parts: plastic input and output pipes, a reinforced plastic digester bag, plastic piping to transport biogas to home or storage, and a plastic greenhouse covering. Flexi Biogas digesters can run on any biodegradable matter including animal manure and domestic waste. The system also has the advantage that it can be set up quickly for places such as refugee camps.

Find Flexi Biogas and compare it to similar technologies in E4C’s Solutions Library. 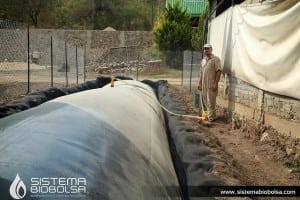 Sistema Biobolsa operates mainly in Latin America. They distribute pre-fabricated and modular biodigesters that convert animal manure to biogas. The biodigesters are available in a variety of sizes, with digester capacities from 4m3 to 200m3. This enables Sistema Biobolsa to target a large range of customers, from subsistence farmers to professionals with access to local and national markets.

In a temperate climate, a BB4 biodigester of 4m3 – requires 24L of waste input for cow manure and can produce 0.9m3 of biogas daily. Sistema has made quite a mark in Latin America with 3000 systems installed and counting. 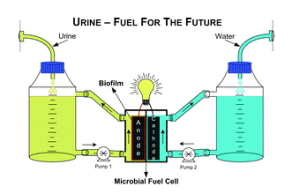 Microbial fuel cells harness the power of bacteria and convert reaction energy into electricity. There are typically two cells separated by a semipermeable membrane that is immersed in an electrolyte solution.

The Pee Power Urinal is a prototype developed by Bristol Robotics Laboratory and Oxfam that uses urine as a source of power to produce electricity, so called “Urine-tricity.” The technology relies on microbial fuel cells, where the bacteria in urine break down organic molecules and generate electricity.

The electricity output from MFCs is relatively small at 1 or 2 mW, and these low levels of energy are stored and accumulated into capacitors. Urine-tricity has been able to generate enough power to charge a Samsung mobile phone, or to power an LED-based lighting system for one toilet. Plans are to develop microbial fuel cells to power indoor lighting in refugee camps and disaster areas.

The project seems to have a solid foundation in research. It now needs some long-term testing in real-life situations.

Rounding out our list of the widely used waste-to-energy technologies, we are compelled to mention gasification and refuse-derived fuel.

Examples of each are included in the Solutions Library.

Husk Power Systems has developed a biomass gasifier that converts residual biomass, which in this case is rice husks or other agricultural waste, into electricity. It performs the feat through pyrolysis and the combustion of volatile gases.

And El Fuego del Sol Recycled Briquettes are fuel briquettes made of recycled cardboard, paper, sawdust, and agricultural waste. The briquettes are used to produce electricity in Haiti and the Dominican Republic.

Waste-to-Energy technologies have positive effects for the communities that use them and for our crowded world.

At the world scale, waste to energy is not only a net greenhouse gas reducer, as, for example, anaerobic digestion avoids the release of methane in the air before conversion to carbon dioxide, but the technology also reduces untreated waste, which helps keep drinking water sources clean.

Find more information on the products mentioned here and others in our Solutions Library.

Water Has a Bright Future in Solar Pumps

A single weather event does not prove climate change, but the heatwave that is hitting much of the Northern Hemisphere this summer and triggering forest fires from California and Canada to Portugal, Greece and Sweden is focusing attention on the need to kick our collective carbon habit. Even without climate change, it just makes sense to transition from fossil to renewable energy sources. Take water pumping technology in rural areas...