Architects as far back as Vitruvius in the first century BC have tried to condense the best practices of their craft into only a handful of points. In his 10 Books of Architecture, Vitruvius created some of the first building codes, though over the course of hundreds of pages of detailed text and diagrams.

In an example from his third book, the Vitruvius makes a stair-count recommendation, writing, “The steps in front must be arranged so that there shall always be an odd number of them; for thus the right foot, with which one mounts the first step, will also be the first to reach the [top] level” (Chapter IV, Sec. 4).

Today, this example is generally accepted as a reflection of outdated priorities. But since that time, architects through the ages from Palladio to Le Corbusier have tried to express the design principles, while few have sought to address the pressing challenges facing architects today.

With the effects of climate change growing more clear, ongoing conflicts drawn from a need for resources, and the financial volatility that stems from both, how can a best practice for our time – if one should exist – remain in the realms of proportion, symmetry, or a preferred number of stairs?

Michael Reynolds and his team at Earthship Biotecture have been working towards establishing a best practice for decades, and have ultimately settled upon six points that can guide architectural design towards an ecologically sustainable future. In October of 2015 I attended the Earthship Academy, a one-month, intensive training course on Earthship building methods in Taos, New Mexico. Half the time was spent on the construction sites of projects surrounding the campus. The other half was spent in the classroom where the six points structured the entire curriculum. In that time I came to realize that these six points are the foundation for an effective response to the real urgencies of our time and for the future.

Rather than harnessing Earth and bending it into a built environment, Earthship Biotecture’s Six Points seek to propose an encounter with the Earth so as to allow the planet to provide its abundance. This abundance is water from the sky, the sun that brings life from the water, and the earth itself that provides massive heat and building material.

These Earth phenomena are at the core of the six points:

1. Regulate Temperature with the Earth and Sun 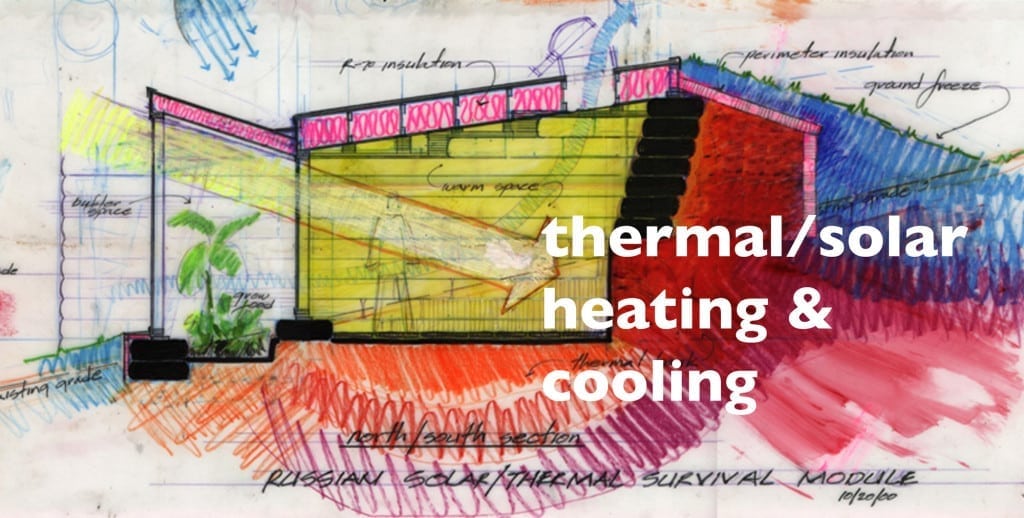 The Earth and the concept of harnessing its consistent temperature is often overlooked in the building profession. While many best practices call for substantial insulation and numerous ventilation standards, the fact that the earth itself can provide consistent temperature regulation is often overlooked. The strategic use of thermal mass – included within the insulation envelope and accompanied with effective venting – is what can allow livable space to remain at 72 degrees Fahrenheit throughout the changing seasons with no mechanical heating or cooling. Systems such as geothermal heat pumps seek to harness this energy, though through expensive, complicated systems. Earthships simply “dig in.” 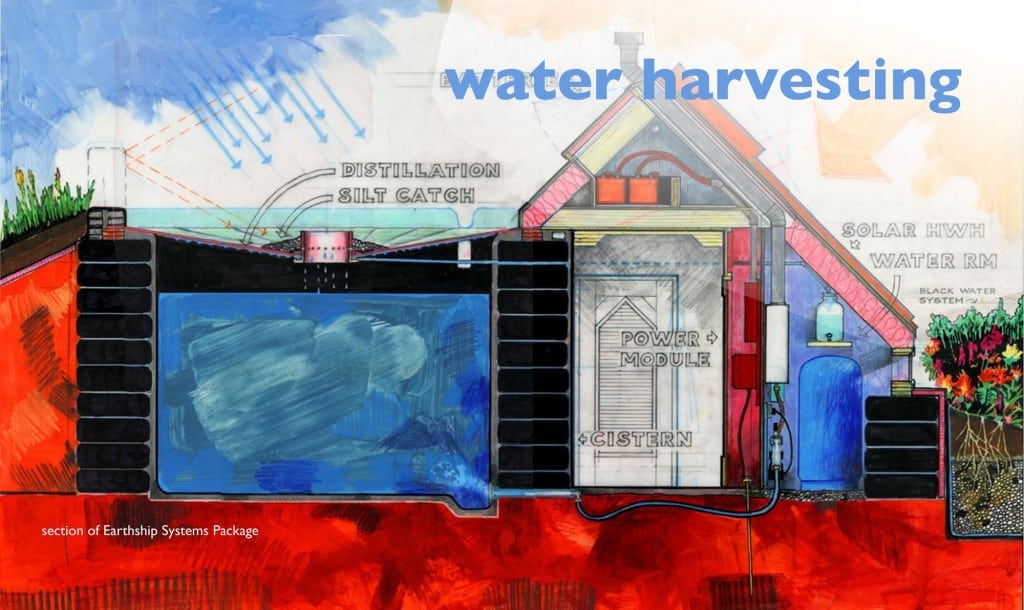 Rainwater catchment is a most common strategy for architects and builders to lower a carbon footprint. Most often, rain water is used to flush toilets and to offset the building’s demand from municipal water systems. Rainwater however, with a bit of filtering, can be harvested for all purposes at the scale of a modest-sized home. Using a combination of gravity, a small pump, and sand or ceramic filters, Earthship residents can use this water for washing, cooking and drinking, thus removing all dependence upon common municipal water distribution systems.

As we are moving into the modern age, it is becoming more and more common for electrical power (and the communication capabilities that come with it) to be considered a basic need. The current state of technology however requires substantial government investment into antiquated, inefficient centralized distribution systems. The use of local energy sources (solar, wind, hydro, etc.) leapfrogs all investment from the public sector. Moreover, when moving to a decentralized system, the strategic use of AC and DC currents emerges which can ensure the most efficient use of electrical power. Decentralized electrical power allows the privilege of modern living within extreme efficiency. 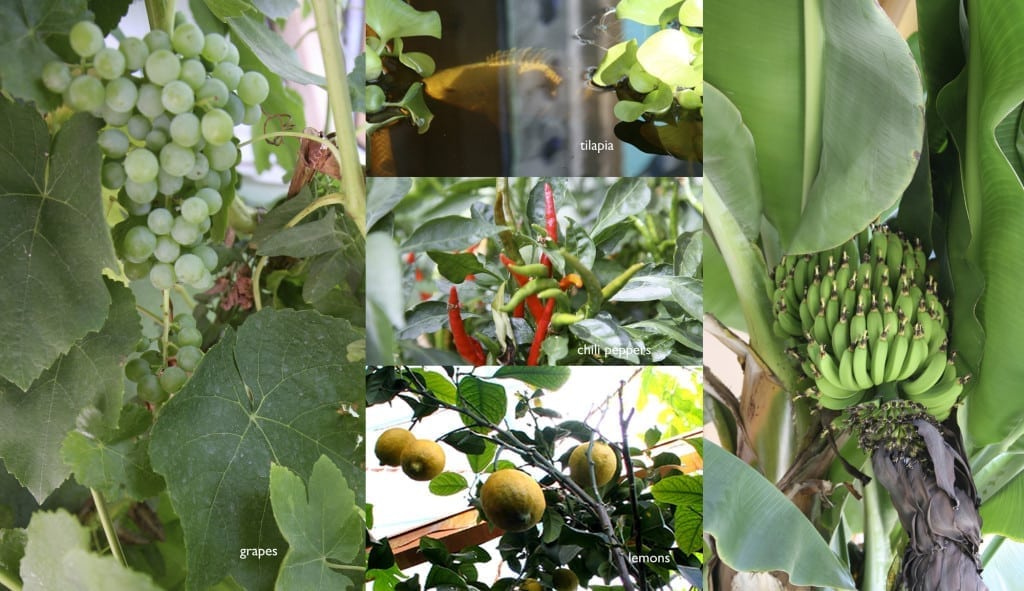 The harvesting of gray water is not new. Many cutting-edge, modern buildings use this water to flush toilets, though only after filtering the water so it appears clear in our toilet bowls. Such filtering systems however remove valuable nutrients that can be put to good use growing food and other flora. Planting systems not only filter the water through natural means, they do it while also filtering the air quality of the space and providing all kinds of food from figs, to tomatoes, to basil along the way 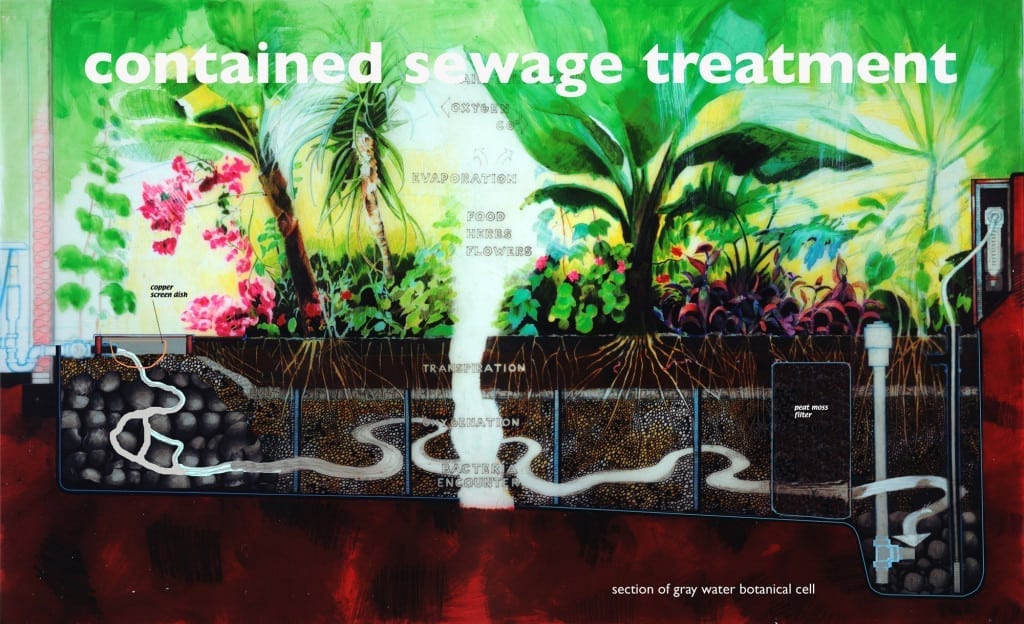 For thousands of years humans have been putting human waste out of mind by constructing massive sewers that move all of the waste underground to a single point. The waste is then either dumped into the sea, or passed through enormous processing facilities – then dumped into the sea. This new “normal” creates a massive challenge at the municipal level. 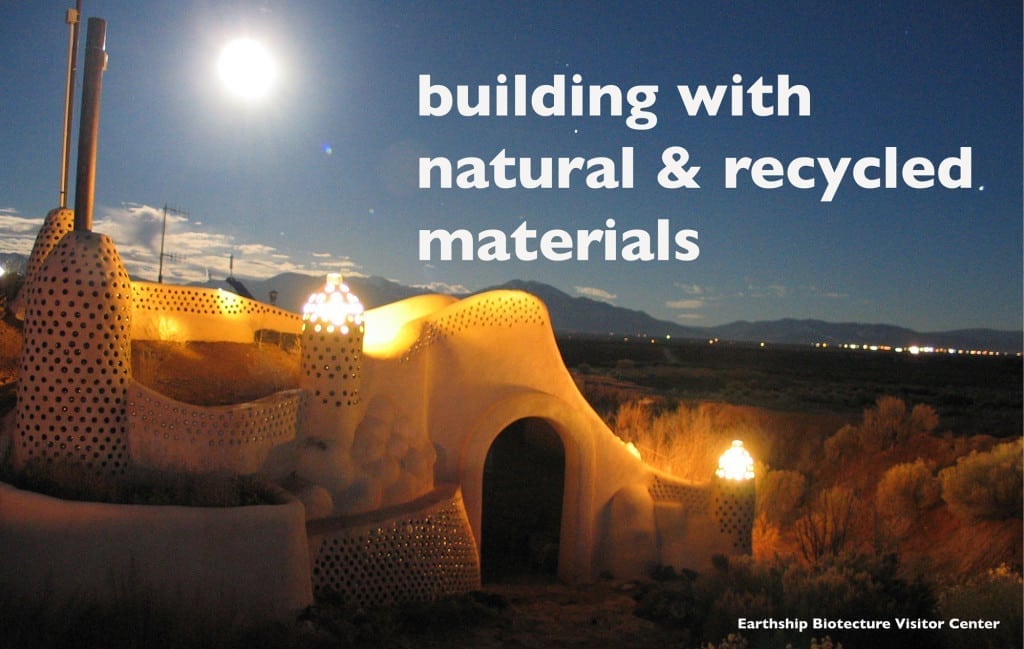 A common measure for the efficiency of construction of a piece of architecture is to quantify the distance that materials must travel to get to the building site, meaning that local and indigenous materials are preferred. Additionally, the amount of recycled or “sustainable” content can cut down on waste. The Earthship team has identified garbage – car tires, plastic bottles and cans – not only as great materials that can be upcycled into the construction process, but as items that are unfortunately indigenous to almost all parts of the world. Using materials that would otherwise go directly to a landfill is both responsible and cost effective when the project is designed and constructed well.

Building Within the Six Points

Earthship Biotecture has not only developed the theory behind each of these points through countless experimental constructions, they are also approaching a modular architectural solution that functions within each of these points and can be built anywhere. The Global Model Earthship, as it has been called, employs all of the Earth’s phenomena to bring forth the abundance that the planet provides. The Global Model creates living space for a family of five (complete with Wi-Fi internet, hot water, and surround sound if one so chooses) that is sustainably independent and a re-creation of the true environment of man.

While these points have moved the practice of architecture in a noble direction – towards sustainable, comfortable living for all, we must acknowledge that it has been built upon the shoulders of our predecessors. It is with this in mind that I must return to the defense of one Signor Vitruvius, who would have thoroughly endorsed the six points of Earthship Biotecture in stating that “all machinery is derived from nature” (Book 10, Chapter I, Sec. 4).

All photographs are courtesy of Earthship Biotecture.

IEA’s Graduate Attributes: A Commendable Revision with Room to Improve

A three-year process culminated in the release of revisions to the Graduate Attributes and Professional Competencies Framework this year, and the International Engineering Alliance and its collaborators should be commended for meeting many of the global community’s expectations. Tensions had mounted as thought leaders called for deeper reform to the engineering educational standards. The framework had not meaningfully changed since the 1990s and the current revision promised to be historic...