Old Fused With New: Sustainable Architecture Where It Is Most Needed

Sustainability in architecture has manifested as buildings that process waste and cool themselves, and as a revival of old construction methods with new design. Locals and visitors to the world’s rural and impoverished regions are building with locally sourced materials, assembled by locally trained labor using a fluid blend of new and old techniques. In presentations this October at South by Southwest Eco in Austin, Texas, we saw evidence of engineers employing best practices in global development. These are standout examples of sustainable architecture in places where lasting construction is needed. 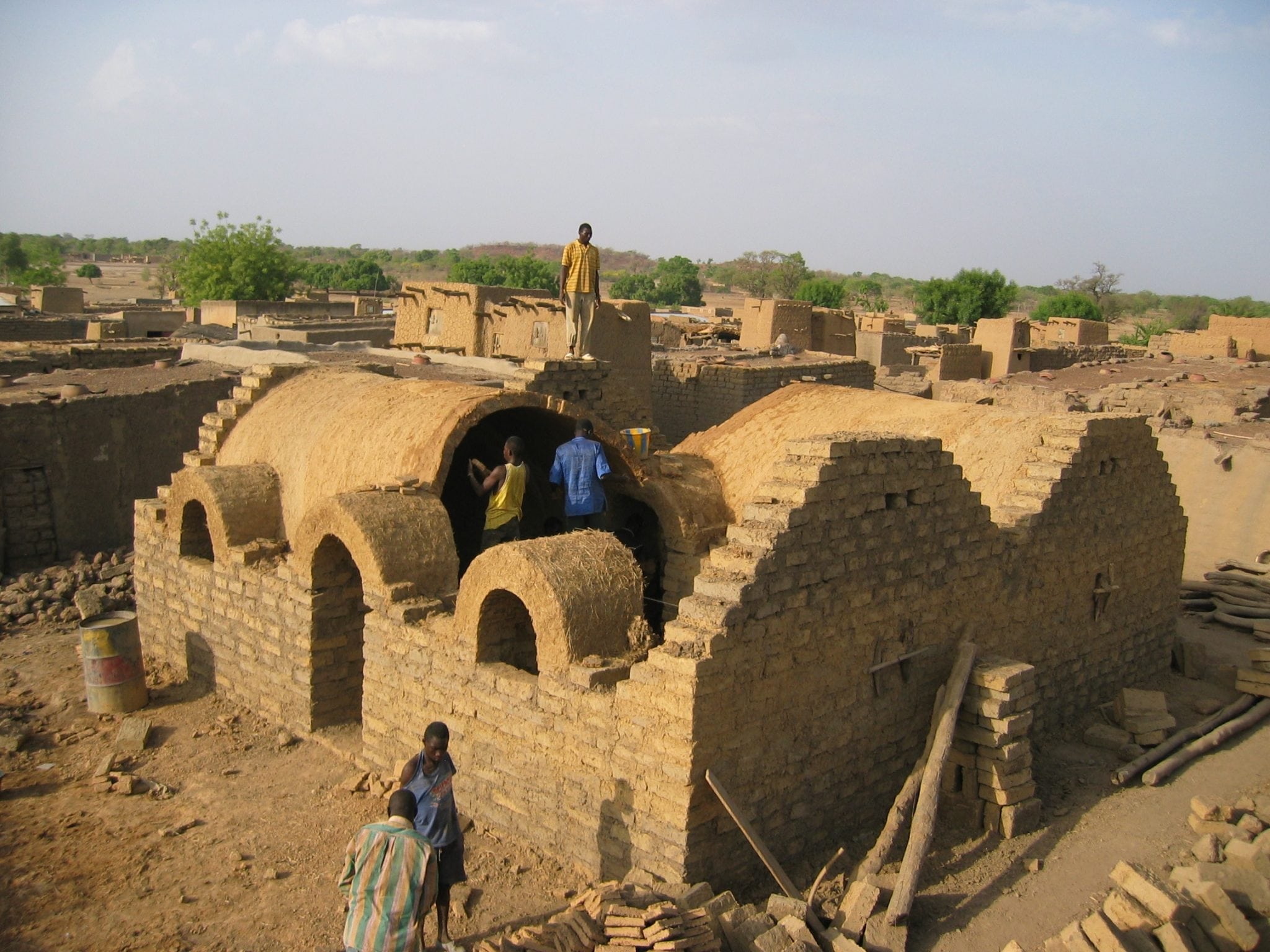 There was a time when West Africans built with simpler materials than corrugated steel, and it is not clear that the change has been an improvement. Anyone who has waited out a rainstorm under a corrugated steel roof will have complaints. The metal amplifies each rain drop into a racket something like the sound of wrapping tinfoil around maracas next to a megaphone. The roofs also amplify the heat, turning a room into a dry sauna in the high-noon sun. They are not dependable, liable to blow loose in a gust, and they are expensive for the four billion people worldwide who live on US $4 or less each day.

“Properly maintained, a Nubian Vault will be a family’s home for generations.”

Fortunately, there may be a dirt-cheap solution in earthen roofs and earthen walls. Borrowing a technique that was in use in Egypt more than 3000 years ago, the Nubian Vault Association is helping West Africans build arches of earthen bricks.

“The thick walls and roof, added to the natural thermal passivity of the earth material, provide considerable indoor comfort to those who live in a Nubian Vault. A vault is cool in the heat and warm in the cold. This makes for better living conditions, but also better working conditions, whether for health centers (the sick and elderly suffer even more from the heat), schools (classes are interrupted in the afternoons in metal roof schools due to excessive heat), and storage houses (a farmer is no longer obliged to sell his entire crop as soon as it  harvested for fear of it spoiling in the heat). Additionally, the sound of rain on the roof is inexistent, a strong selling point for many families,” Preuss says.

Since the year 2000, masons connected with the association have built more than 2000 homes, storage facilities and community centers in Burkina Faso, Mali, Senegal, Benin, Ghana and Mauritania. To spread the knowledge of the construction technique, the association and its trainees have taught 440 masons. The masons, in turn, have taken on 400 apprentices. They are passing the knowledge down a line that is lengthening even without the association’s influence. In that way, both the know-how and the architecture itself should endure over time.

“A Nubian Vault is solid and weather-resistant, properly maintained, it will be a family’s home for generations,” Preuss says.

For more, please see the association’s website. The association has made plans and building guides available online at this page.

Construction underway in rural Uganda is expanding a regional maternity ward from two rooms to eight. The ward in Kachumbala serves 170,000 people in the Bukedea District. The 1950s-era facility is overburdened with six births each day. Now, designers, planners and engineers with the global firm HKS, working with the UK-based non-profit Engineers for Overseas Development, are assisting the community in Kachumbala to enlarge the ward.

The project has checked boxes on the list of best practices of engineering for global development from ideation through the construction phase. The idea came from the community, which requested an improved ward. Although it has improved considerably over the last few decades, Uganda still has one of the world’s highest infant mortality rates at 38 per 1000 live births (compared to 6.1 in the United States and 2.3 in Japan and Finland). The community knew what it needed.

“They are using trees for shade, not for fuel.”

Then the planners had to decide between shipping a prefabricated structure or building on site. They chose to work with local crews. They trained local workers in construction techniques while at the same time borrowing methods and materials from the region.

Traditional construction used handmade clay bricks fired in wood-burning kilns. Rather than burn trees, the project planners brought in a compressed earth block press. The press makes bricks of raw earth mixed with a low percentage of cement or lime that dry hard in the sun.

“That saved trees, using trees for shade, not for fuel,” says Ellen Kozack, HKS’ Director of Sustainability. “Another interesting thing is that in Umbali, the closest city is that they have these terracotta screens that allow light and ventilation and more privacy,” Kozack says.

The strategically placed terracotta screens and elevated roofs allow for greater airflow and passive cooling. This passive cooling is necessary in the ward, which has no electricity to run air conditioners.

Construction is scheduled to end early in 2017. After that, HKS will likely take on a new project in the region. Afterward, HKS appears ready to continue working in the community. That, of course, is another of the best practices for a sustainable project in global development.

“We have a relationship with Kachumbala, with the community. I don’t foresee that we’ll just pick up and leave the area,” Kozack says. 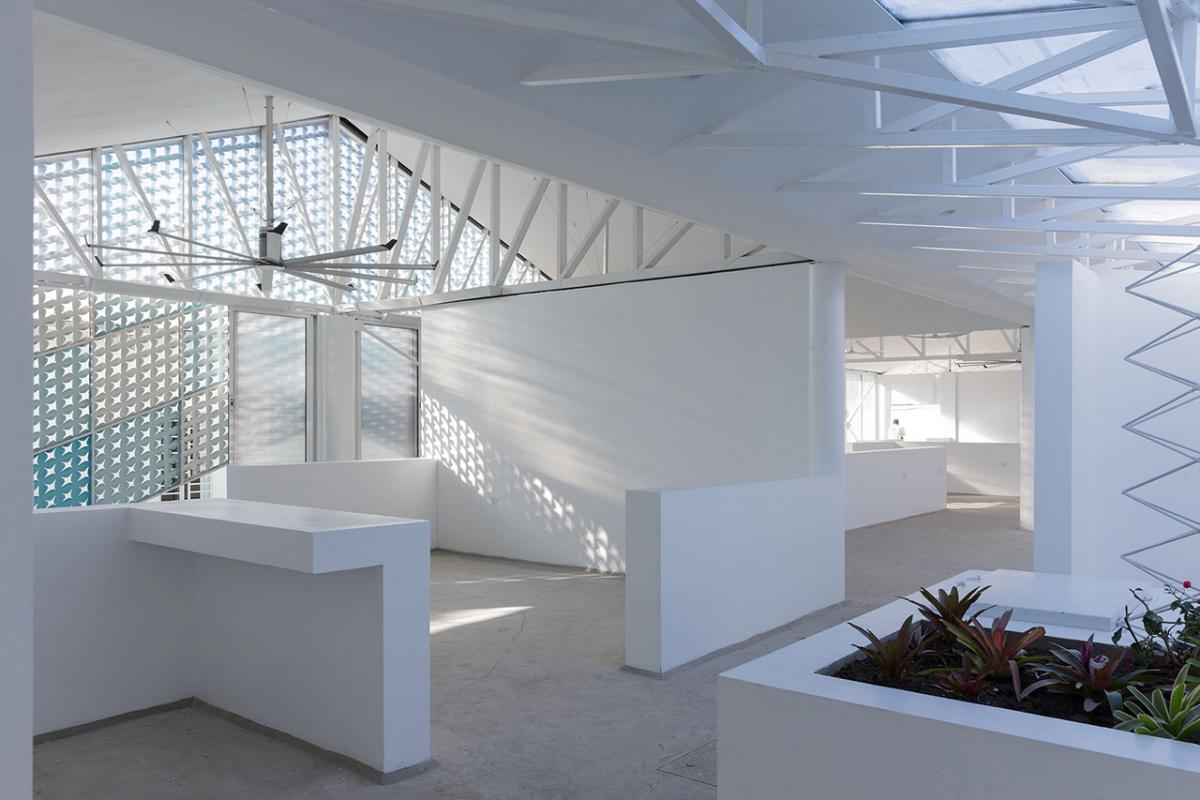 Architecture may have a hand in stemming the spread of cholera in Haiti. The US-based firm MASS Design has worked with local craftsmen and the Haitian health care provider Les Centres GHESKIO to build a permanent cholera treatment center in Port-au-Prince. The center harvests rain for clean drinking water and diverts human waste to an underground digester to treat. The treated waste cannot contaminate groundwater and spread cholera, which has been a problem in other facilities. And clean water and safe waste offer an improvement on the tents where cholera patients are typically treated.

This latest cholera epidemic was inadvertently introduced into Haiti through infected UN workers who arrived to help rebuild after the earthquake of 2010. Since October of that year, cholera has sickened an estimated 800,000 people and killed 9200, according to government figures.

And the real death toll may be much higher than the official number because of unreported cases, a recent Doctors Without Borders study suggests.

The GHESKIO center provides a clean and passively cooled suite of rooms for up to 100 patients at a time. Through rainwater harvesting and waste treatment, it cuts off the two biggest cholera transmission routes: water supply and waste. The patients drink clean, uninfected water that the building harvests from its roof and stores in a tank of 18,000 liters (4800 gallons). And their waste is converted into non-infectious compost that can be used as fertilizer or disposed of safely. The center can treat 946,000 liters (250,000 gallons) of wastewater annually.

The challenge was to create a structure that lacks air conditioning but can still provide comfort and dignity to the patients, says Adam Salztman, MASS Design’s project manager for the treatment center.

“Cholera patients need to be monitored constantly, therefore the building needed to be designed with open wards so that the nurses can see all the patients at all times. Privacy is an issue, therefore we used half-height walls and vegetated partitions to create a dignified environment where patients are not staring at other sick patients, but have visual stimulation,” Salztman says.

The center can also continue to function even during a black out. Patients benefit from natural ventilation through metal screens that were handmade by local artisans. And the water supply is gravity fed. The limits on the building functioning without power are imposed by the waste water system, which requires a pump, the electric lights and fans.

MASS Design has documented the design and construction of the facility in the video, previewed below, that they showed at South by Southwest Eco in Austin, Texas, in October 2016. 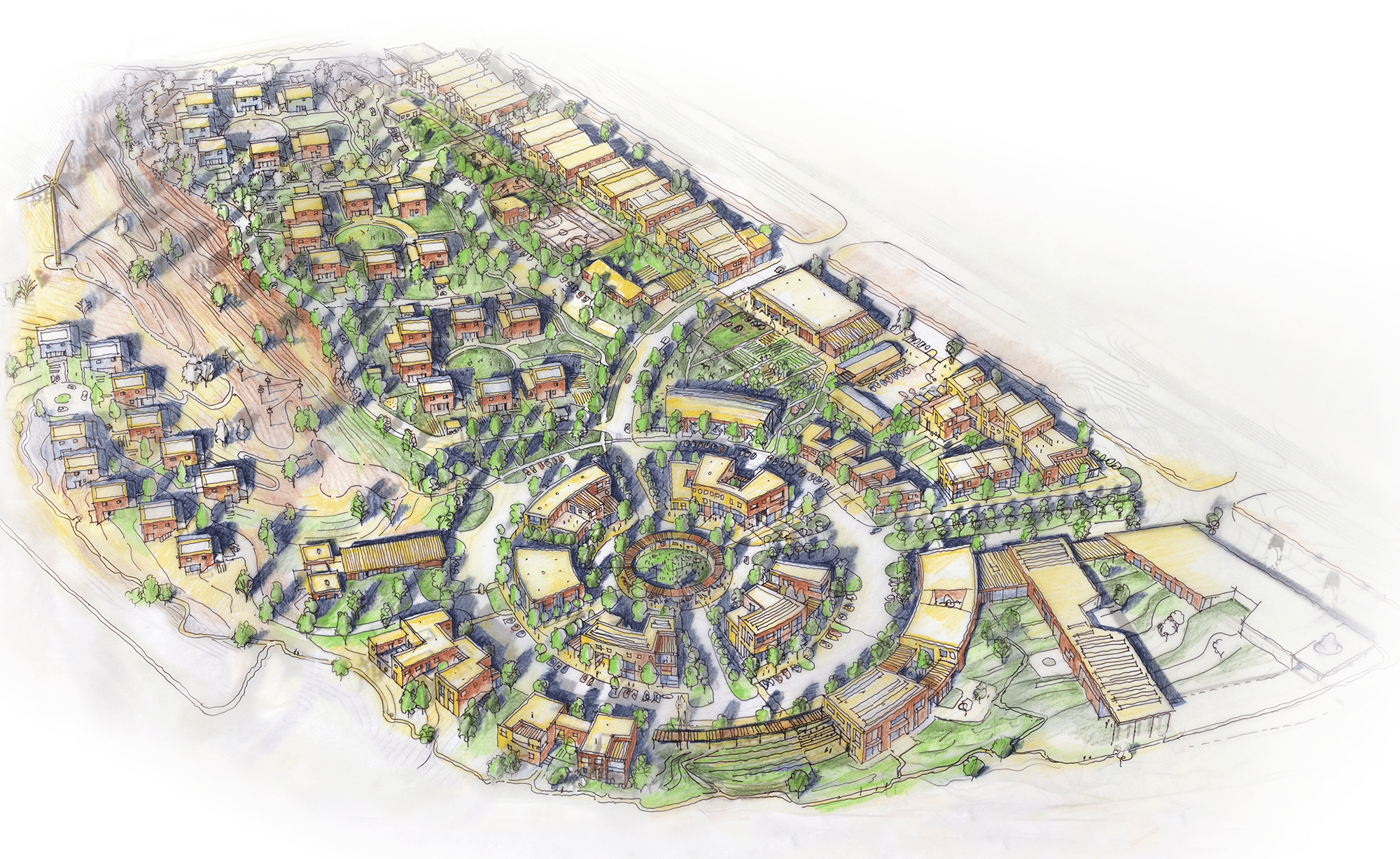 Poverty is rampant among residents of the Pine Ridge Indian Reservation in South Dakota. Like many reservations in the United States, hope for change is dimmed by high unemployment and substance abuse rates and a lack of basic services. But a new community design project targets those very problems.

When finished, the Thunder Valley Regenerative Community Development will encompass 34 acres of housing, health and education centers, a pow-wow ground, a youth shelter, food gardens, an amphitheater and retail space for local businesses. It will also include wastewater treatment facilities and rooftop solar power systems.

The project is a collaboration between members of the community, the Oglala Lakota non-profit organization, four architecture firms and the Thunder Valley Community Development Corporation.

Social and physical systems converge to undergird the project’s sustainability, says Christina Hoxie, Lead Planner of Thunder Valley and an architect at BNIM.

Among the social systems are training in sustainable construction practices that allow people to build their own homes, other training in employable skills such as agriculture, adaptation strategies to desertification and a cultural resonance to the Lakota people.

The physical systems include an ecological wastewater treatment facility, high-efficiency buildings positioned to benefit from sun warming, sustainable agriculture, an emphasis on foot traffic through design and solar and possibly wind power generation.

“According to our current understanding of full buildout, Thunder Valley rooftop mounted PV will generate approximately 5500 kW-DC. One hundred percent of electrical usage would be covered by this generation. A district energy and battery backup system will be implemented. At this time, wind is not an onsite consideration but a possible a future offsite venture,” Hoxie says.

Ground broke in June, 2015, and construction is projected to finish in 2025. The video below shows the project in greater depth.

The following is an excerpt from the book Founding Women: African Women Who Are Defying the Odds to Build Successful Businesses in Tech. Printed here with permission.  Nneile Nkholise Founder, iMed Tech | South Africa Nneile is a mechanical engineer and social innovator whose vision is to transform healthcare in Africa. She is the Founder of iMed Tech, a medical innovation startup which produces prosthetics for cancer patients and burn...