Contributing author Ronald Kizza stands beside a recipient of a plastic-to-fuel device in Kampala, Uganda.

Communities in emerging economies can convert their waste plastic into a fuel oil that can be used as a drop-in substitute for diesel or kerosene. The University of Kentucky Appropriate Technology and Sustainability (UKATS) Research Group implemented a pilot test of the process in Kampala, Uganda, in collaboration with Makerere University and Institutional Energy Solutions. 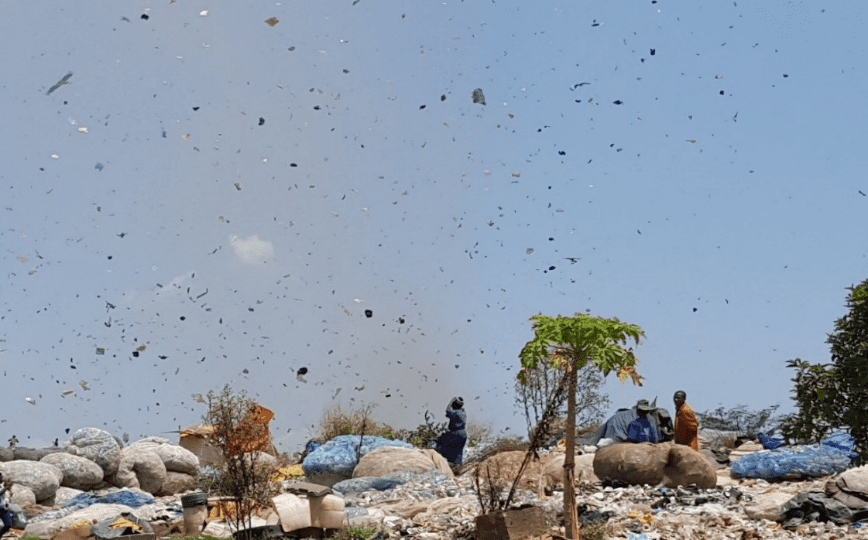 Trash blows among the waste pickers at the Kiteezi Landfill in Kampala, Uganda.

Lighter, stronger and cheaper than other materials, plastics really are a miracle of modern chemistry. Despite their benefits, however, there is an ever-increasing mass of mismanaged plastic waste damaging the global ecosystem.

Only a tiny fraction of plastic waste is actually recycled. In industrial economies with well-developed infrastructure, most plastic ends up in a landfill. In developing countries and places without easy disposal options, plastic waste often ends up on the ground and in waterways.

To combat the rising issue of waste plastic, a new approach is needed. The traditional manufacturing paradigm is based on a “Produce  Distribute  Consume  Discard” model. As an increasingly popular alternative, the Circular Economy addresses the design phase to ensure that products retain value after they are used or even broken. The concept encourages designers and producers to consider end-of-life issues when developing new products and processes.

Through that lens, we could say that plastic is discarded because it does not have value.

This way of thinking could transform the problem of plastic waste. Through that lens, we could say that plastic is discarded because it does not have value. 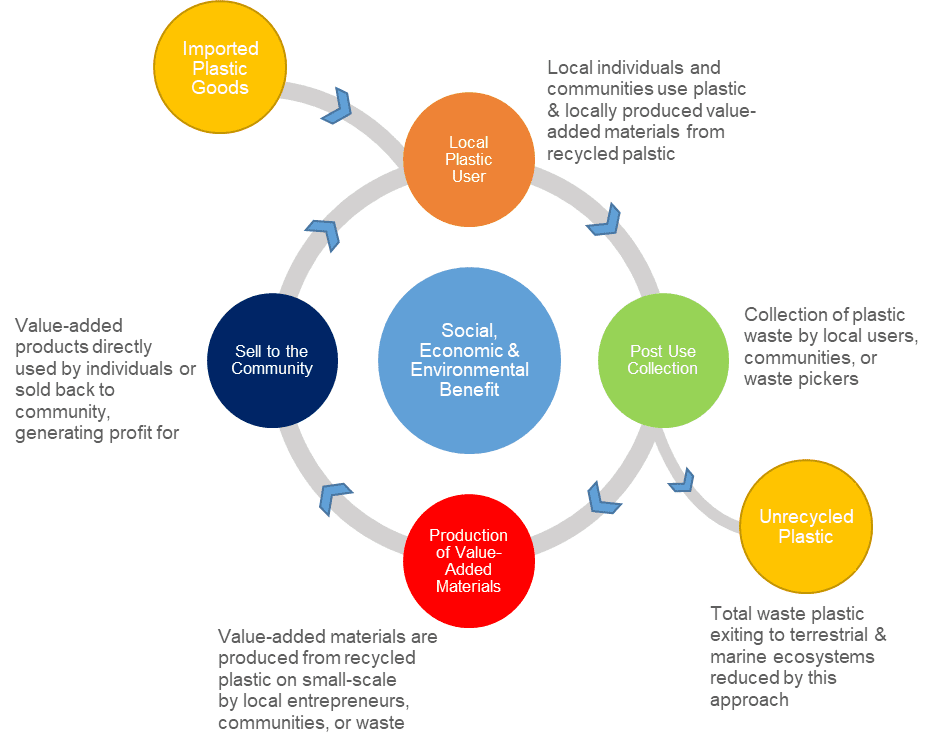 Plastic must be given a value so that it isn’t discarded. And in developing or resource-limited regions, that value must be recognized locally, because supply-chain constraints favor localized solutions. That means decentralized collection and decentralized use of plastic waste.

We propose the Locally Managed Decentralized Circular Economy for Waste Plastic. Imported manufactured goods enter the cycle as the initial feed source. The plastic is used locally, collected post-use, then used as raw material locally to produce goods that can then be sold back to the community. The only output from the perspective of municipal solid waste is any material that gets discarded because it is either not collected, or can’t be used.

The key here is that everything is local. Collection, production and use are all managed in the local community. Of course this limits the scope of manufacturing, but has a higher likelihood of success when implemented. The real benefit is that this approach does not require sophisticated infrastructure and provides a local incentive for waste collection.

How plastic to fuel works 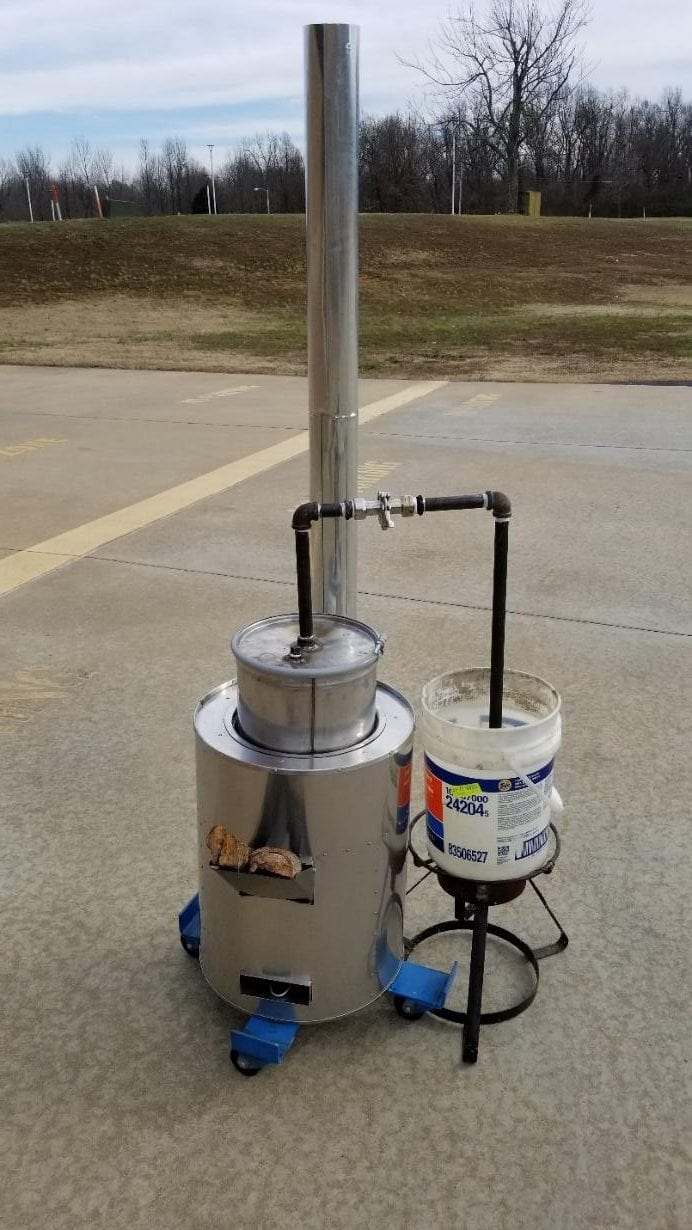 A technology that can be deployed as part of a locally managed decentralized circular economy is the conversion of waste plastic in a fuel oil, suitable for use in a diesel engine or a kerosene cook stove. Plastic polymers like High and Low Density Polyethylene, Polypropylene and Polystyrene and be converted into a liquid fuel by a process called thermal decomposition, or a slow pyrolysis. During the process, the long chain polymers that make up the plastic break down into smaller and smaller molecules, eventually reaching a molecular weight and heating value similar to that of diesel fuel or kerosene.

One kilogram of plastic can be converted to one liter of fuel oil. The process is simple and can be designed to perform in a resource-constrained region.

This fuel can be directly used in an unmodified diesel engine. Using this process, 1 kilogram of plastic can be converted to 1 liter of fuel oil. The chemistry is simple and a process can be designed to perform in a resource-constrained region. The UKATS research lab developed a device constructed from materials that are widely available in developing countries. Our device slowly pyrolizes plastic waste using heat produced by burning wood or other biomass.

The plastic-to-fuel process is particularly suited to an appropriate technology solution. The chemistry is simple and the operation can be carried out on a small scale with limited technical expertise. Developing countries may even have an advantage over the developed global West. In a developed economy, most waste is unsorted, which makes the process more challenging. In emerging economies, people are able to sort waste and retrieve the appropriate plastic easily.

We have referred to the process of converting waste plastic into fuel oil as Trash to Tank, or 3T.

Trash to Tank (3T) vs. recycling

The 3T process differs from other recycling efforts in that the plastic is completely consumed. Although we don’t mean to suggest that recycling efforts are in anyway negative, they don’t remove the plastic from supply chain. Eventually, recycled plastic will reach the ecosystem. Other efforts like remanufacturing the plastic as a building material or aggregate for roads are also positive, but only serve to delay the eventually migration of plastic to the ecosystem. Of course, using the plastic as a motor fuel does release CO2 into the atmosphere, but as our previously published research shows, it is less than what would be released from fossil-based diesel fuel and contains no sulfur emissions.

3T provides an economic incentive for underserved communities to address their waste plastic problem themselves.

The 3T process benefits people by contributing to clean communities, prosperity by providing business opportunities for local entrepreneurs, and the planet by diverting plastic from entering the ecosystem and producing a cleaner burning fuel than fossil derived options. In short, 3T provides an economic incentive for underserved communities to address their waste plastic problem themselves.

Implementation of Trash to Tank in Uganda

The UKATS group, the Department of Agricultural and Biosystems Engineering at Makerere University, Institutional Energy Solutions in Cottage Grove, Oregon and the Rotary clubs of Paducah, Kentucky and Kampala North have worked together to implement a pilot test of the 3T concept in Uganda. The team selected and trained a recipient of the processor, who then began producing fuel from locally gathered waste plastic and selling it as a side business.

Since July 2018, the recipient has been processing waste plastic four to five times per week, producing 20–25 liters of fuel weekly. Due to the success of the pilot test, the project will be expanded in 2019.

The team plans to expand the project in Uganda during the summer of 2019. Six processors will be distributed around Kampala. Additionally, the team is working with the Uganda Bureau of Standards to have the fuel certified as an over-the-road fuel. This will help with the broad implementation of the project.

Jeff Seay is Professor of Chemical Engineering at the University of Kentucky and PI of the UK Appropriate Technology and Sustainability research lab.

This innovation is one of ourPromising Prototypes of IEEE’s Global Humanitarian Technology Conference in Seattle Oct. 30 – Nov 1. For more in the series, please see below. Shelter, food, water, power and waste disposal are among the basic needs that emergency response efforts provide after a disaster. They can also be chronically scarce in some impoverished communities. A new modular energy production facility in a shipping container could meet...