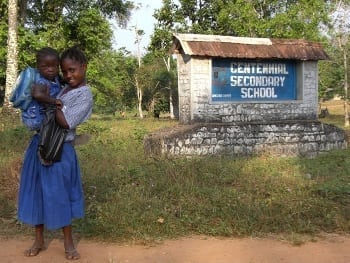 Professionals and leaders have graduated from Centennial Secondary School, and this student might be a future doctor or engineer herself. Photo courtesy of John Cirucci

The Centennial Secondary School in the coastal fishing village Mattru Jong was once one of the top educational institutions in Sierra Leone. Its graduates took careers as doctors, engineers and other professionals working in countries around the world. But now, the school is in disrepair. The 1200 students on its campus have no access to running water, plumbing or electricity. And some of the facilities are dilapidated and unsafe to use. The damage is a legacy of Sierra Leone’s decade-long civil war in the 1990’s. But the school has a chance to reclaim its former standing.

Since 2009, a team of engineers from Pennsylvania has worked to repair the school. Volunteers with the Engineers Without Borders Lehigh Valley Professionals chapter have worked with the school’s alumni and the Mattru Jong community to install latrines and design a solar electric system. In time, they also plan to repair buildings and restore running water. The team is looking for collaborators on their work and posted the project in a workspace on E4C.
“The special merit of a school project is the potential to impact far more lives than the immediate beneficiaries,” says John Cirucci, founder of the EWB chapter. “Every student who goes further with her or his education will contribute to building Sierra Leone.” 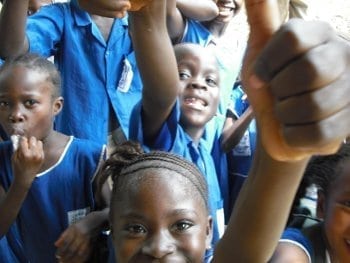 To coordinate the work, the volunteer engineers first sought help from the school’s international alumni. The former students are dispersed across Africa, Europe and North America. They lent invaluable cultural expertise and guided the engineers through some of the nuances of working with the Mattru Jong community, Cirucci says. With their help, the engineers established a board to oversee the infrastructure repair and smooth relations with the school’s leaders. The board includes community leaders, school administrators, teachers, students and parents.

“This board has taken on accountability. It’s still early, but it has been very promising,” Cirucci says. Importantly, the board has also agreed to oversee the work and expense of maintaining the new infrastructure as the engineers build it.

The engineers installed latrines at the school, leaving the lack of running water as the school’s gravest health problem. The students fetch water from a polluted river. Unfortunately, the work to restore the water system is also the hardest to do, Cirucci says. While they consider the best water strategy, the engineers have put that part of the project on hold. Electrification, however, is underway. 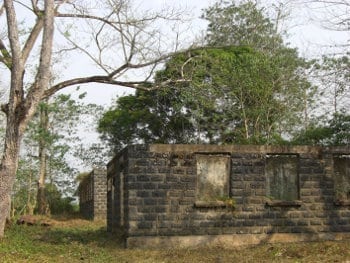 Lights for a better education

The volunteers returned from a work trip in February during which they designed a solar electrification system. When finished, the power should light three classrooms for evening study.
Classroom lights are a priority for the older students who need to study for national exams, Cirucci says. There is no electrical grid within 50 miles of Mattru Jong, so students study at home by candlelight. With classroom lights, students can stay on into the evenings studying at school.

It will always be their school

The project is challenging and has a broad scope, Cirucci says. But the real barriers to change at the school aren’t structural, they’re socio-economic, he says.

As a step toward a more prosperous future in Mattru Jong, the engineers would like for the community to take ownership of this project.

“We have been working hard and learning much about how to make sure the school and the community are committed to this infrastructure rebuilding program and own it. We bring some specialized skills, but it will always be their school,” Cirucci says.

To collaborate with the EWB team, you can sign on to the project’s workspace at E4C.

Drastically cutting the cost of solar power could put it in league with fossil fuels, and the US Department of Energy is betting on it. The DoE’s SunShot Initiative aims to cut the price of installed solar power generators by 75 percent (of the 2010 cost) by the year 2020. That cost would range from $1 per watt for utilities to $1.50 per watt for homes. But hitting that mark...