Slowly but surely, robots are rolling into African schools. And it’s not just a bad sci-fi script. Nigeria debuted at the World Robot Olympiad last year, South Africa has had a FIRST Lego robotics league since 2004, organizations such as Fundi Bots in Uganda and Fab Lab in Kenya are helping students build bots and Egypt has a mine-detecting robotics competition underway.

Now, a computer science professor in Ghana is helping to pioneer this nascent robotics movement by linking robotics fans into a continent-wide, virtual community. Ayorkor Korsah, at Ashesi University in Accra, has co-founded the African Robotics Network. AFRON, as the network is called, launched in May and it already has more than 300 members in 25 countries.

Last year, Korsah graduated with a doctorate in robotics and artificial intelligence from Carnegie Mellon University in Pittsburgh, Penn., and she partnered with Ken Goldberg, a professor of robotics, art and new media at the University of California, Berkeley, to found AFRON. There is star power among the guiding minds behind the network, with an advisory board that includes representatives of NASA’s Jet Propulsion Laboratory, MIT, Make Magazine, IEEE and even Tim O’Reilly at O’Reilly media, among others.

We caught up with Korsah via Skype from Accra and she answered five questions. 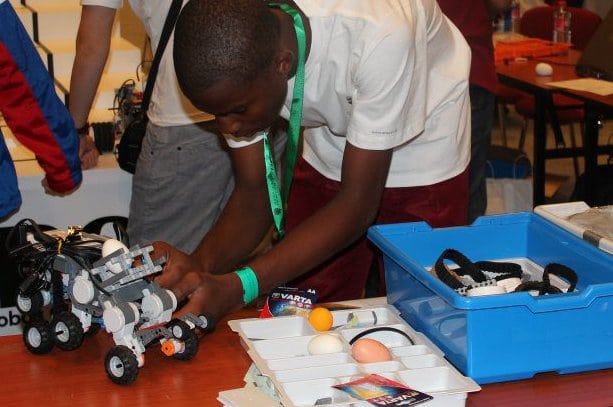 A Nigerian student tweaks a Lego Mindstorm robot at the World Robotics Olympiad 2011in Abu Dhabi. Photo by Mindstorms Nigeria.

E4C: How did AFRON and this surge in robotics interest in Ghana and Africa come about?
AK: As of a few years ago there really wasn’t anything much that I knew of in robotics in Africa. And so, in something like 2006, over one of my summer breaks, I designed and taught the first introduction course in robotics in Ghana [at Ashesi University]. And students loved it.

The goal of the course was to help the computer science students broaden their thinking about what they could do. They had the idea that they should build databases and systems to help businesses keep track of their employees and that kind of thing. Stuff that was boring. And computer science can be so much more than that. The goal of the robotics course was to expose them to something that is completely different.

E4C: To some readers, robotics in Africa might sound surprising. What are the goals for this network?
AK: The goal of AFRON is to create a community, promote communication among those interested in this field, have them share information and resources, support each other’s work and kind of bring it to a head and create a critical mass where even more interesting things can start to happen. Talking about this, you realize that it is surprising that there is something going on in robotics in schools, universities and maybe even in industry [in Africa]. It’s surprising. It’s surprising to those of us in Africa and it’s surprising to people outside of Africa.

We have about 300 individuals and institutions signed up and it’s kind of interesting because we have a real range, ranging from people like robotics researchers at universities, all to way to students who may have taken one robotics course in college and are doing completely different things now, but are definitely interested in robotics. It’s a way of bringing together anyone with any interest in robotics in Africa.

E4C: What kinds of changes would you like to see in robotics in Africa in the next five years?
AK: I’d like to see a variety of different platforms that can be used for educational robotics. Not just the Lego Mindstorms. I’d love to see some kits that are locally developed, which we don’t see much of now. In general, I’d like to see much more of it – more people involved in robotics at more levels. I think the robotics kits that exist are pretty interesting and pretty useful for students to learn from. It would just be nice to see more of that accessible to students while working on different things.

E4C: What are some of the ways that robots are used in Africa?
AK: The most common things that we’ve seen so far are educational programs around robotics. In Egypt they have this competition to design robots that can detect land mines. It is a really cool example of researchers looking at how to apply robotics to local issues.

The thing about robotics is that it involves many different fields. From an educational point of view, you learn about this whole idea of system integration, and you also learn a little bit about different fields. You might have a problem for which you don’t necessarily want to develop an automated robot to solve that problem, but some components of robotics might be helpful.

For example, the issue of sensing, which is really important in robotics. There are so many problems in our context that could be solved using a little more sensing than we have right now: Sensing air quality or sensing the spread of insects and mosquitoes for malaria. That’s what I like to stress to my students. Think about robotics as a whole, but think about the different aspects of it and think which of these aspects are relevant to the problem that you’re trying to address. The cool thing about robotics is that it brings together all these different areas.

E4C: Speaking of future applications for robotics, what might we expect to see in Africa?
AK: It would be great to see more African countries doing more manufacturing and exporting more advanced things than just minerals and agricultural products. And robotics plays a role in manufacturing. It’s an interesting balance between what do you do with human power versus what do you do with automation. In parts of the world where labor is pretty cheap, it’s going to take some creative thinking to get that balance right. I’m not one to advocate for throwing technology at a problem if it’s not needed.

One area that we need more robots involved in is mining, just because of the conditions that many miners work in in many African countries. The whole situation with the recent mining disaster in South Africa speaks to this issue where you have human miners working in very arduous conditions. It would be cool to get more automation, more robotics involved in that.

You could definitely apply robotics to agriculture. But whether Africa is ready for that or needs that is less obvious right now. It doesn’t make sense, I don’t think, to have robotics involved in agriculture right now.

It may also have some sanitation applications. For example, there’s a project that’s been going on in Ghana for a while where they’re dredging a contaminated lagoon. So that would be a great area to have more automation in, rather than exposing humans to dangerous substances. Those are some ideas off the top of my head. I think time will reveal some of the answers.