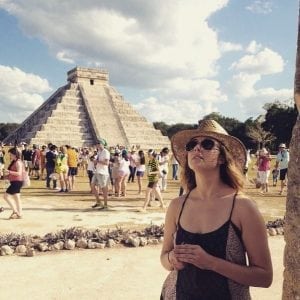 Growing up in Romania, political corruption was a family dinner conversation, and Anca Matioc has translated that ingrained interest smoothly into a career in civic technology to enable more open government.

Ms. Matioc steered her profession into Latin America where she worked at the Chilean Fundación Ciudadano Inteligente. There, she directed an open data project called Desarrollando America Latina, and she co-founded AbreLatAm, which she describes as an “un-conference” that sets its agenda as the conference unfolds with its participants. She organized hackathons “when hackathons were cool,” and advocated for open data when that term was still new, she says. Now, Ms. Matioc has taken a position as the Latin American Regional Lead for The Engine Room, which helps develop technological tools to assist activists and organizations around the world.

E4C: Why open data and why civic technology?

AM: The obvious answer is indeed that openness combats corruption. One part of the anti-corruption equation is transparency. The other part is accountability. Those two pieces don’t always go hand in hand. A lot of times you see proof in front of you, plain as day that there is corruption going on, but no one is held accountable.

In Mexico, for example, there’s a recent case that just blew up of the Mexican government spying on civil society members, the “Gobierno Espia” case as seen in The New York Times. They’re not being held accountable for that because there isn’t really a mechanism by which to hold them accountable. Civil society is going through the channels they have available, but there aren’t any sanctions.

“Transparency is wonderful, openness is great, but that’s not where it ends.”

There are many other cases in Latin America and other regions where cases of corruption – conflict of interest, money laundering, you name it – are proven but there isn’t any serious consequence. Sometimes there are no vehicles for accountability, so that means making new laws. Sometimes the laws are in place but not enforced. We work with advocacy organizations that don’t just stop at showing the data. They are watchdog organizations that work with government to create laws and enforce them.

So, yes, transparency is wonderful, openness is great, but that’s not where it ends. 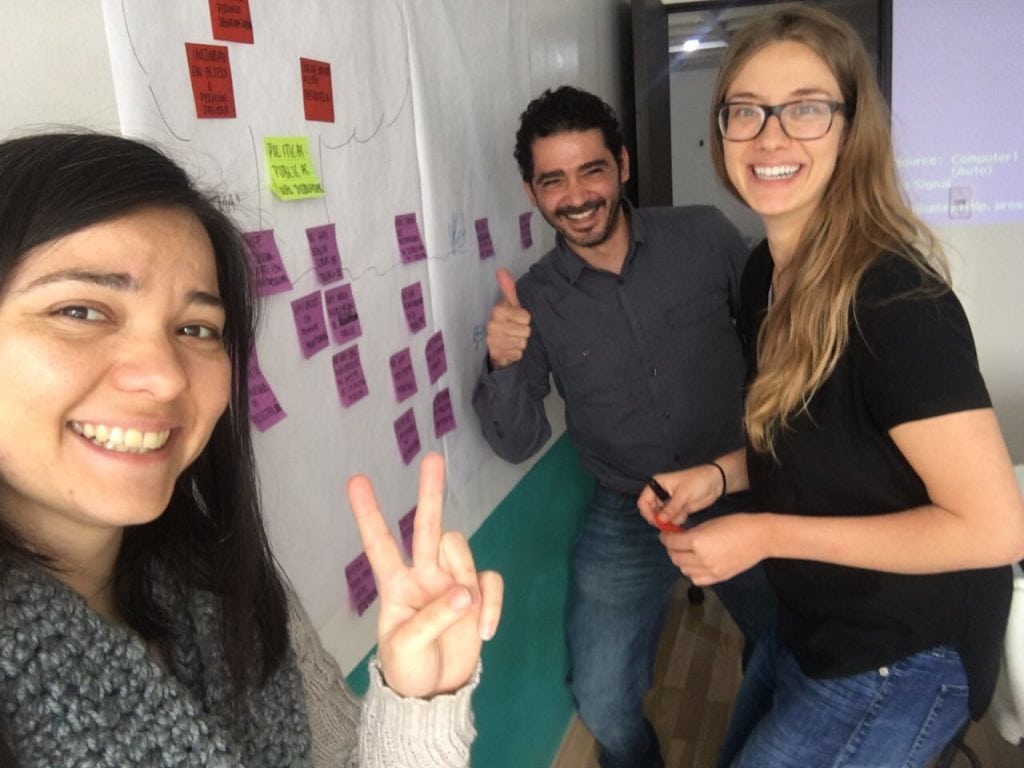 E4C: Do you have updates to share about the two Latin American projects on the Engine Room’s site (and are there any new projects in the pipeline)?

AM: The projects on The Engine Room site are pilots of our Matchbox program in Latin American program, Directorio Legislativo in Argentina and Quién Compró in Mexico. Those engagements finished in 2016 and we’ve started working with two new organizations last October, Japiqay in Peru and Causa Natura in Mexico.

Directorio Legislativo is a well-established organization in Argentina that has a history working on legislative issues, monitoring them as they come in, translating them for laymen, businesses, journalists and people with specific interests. They had a short-term engagement with the Engine Room of four months. The Engine Room looked at their platform needs, looked at their UX, developed wireframes and mock-ups, but didn’t go to the implementation phase. Directorio Legislativo has amazing projects coming off the ground now and they’re doing great work, but this project is still under wraps.

“There are corrupt politicians who are coming back into political life who people tend to forget… They’re trying to create the memory of the Peruvian people.”

Quién Compró came out of a Desarrollando America Latina event in Mexico. A group of friends wanted to create a micro-tasking platform and database where anyone could go and review the receipts of their politicians and see what they were spending their money on. We helped them digitize the documents and even bought them a scanner. They were digitizing massive amounts of documents – boxes to the ceiling, two rooms full of documents. And this, of course, is a technique by many governments to “bury the lede.” But, as we saw with many Desarrollando America Latina projects, it’s hard to get off the ground because they don’t have the funding.

Currently, we’re supporting two new organizations, Japiqay and Causa Natura. Japiqay is building out an anti-corruption Google database of evidence of political corruption in Peru from cases over the past 30 years. The goal is to obtain through FOIA [Freedom of Information Act] requests, organize, and make useful thousands of documents for use by journalists. There are corrupt politicians who have been in and out of jail for corruption who are coming back into political life and who people tend to forget. With their project “Memoria y Ciudadania” (Memory and Citizens), they’re trying to create the memory of the Peruvian people.

And the other organization we’re working with is Causa Natura, a civil society organization working on corruption issues in the fishing industry in Mexico. They’re collecting data on fishing subsidies, who’s getting the subsidies and whether that’s being allocated fairly. The short answer is that they are not.

You can read more about our Matchbox program and our current partners, including these two Latin American organizations, Causa Natura and Memoria y Ciudadania, and about our new Sub-Saharan Africa partners.

E4C: What have been some lessons learned from your work in civic tech and open government?

AM: What Desarrollando America Latina taught me is that collaboration is key. From individuals working together to different sectors of society working together. I’m really seeing multidisciplinary teams as critical. Also, long-term investments in projects is critical, and so is a consolidated team.

Something we’re thinking about at The Engine Room now is where our support should come in. We believe in working collaboratively with the people we support, not parachuting in with solutions. We believe in drawing the road map together.

“We believe in working collaboratively with the people we support, not parachuting in with solutions. We believe in drawing the road map together.”

In relation to creating real impact with projects from either civil society or government, it’s my belief that without real government involvement and without long-term investment, there aren’t going to be any real development projects that come off the ground. There isn’t anything that will be sustained in time.

E4C: Story time: Would you please tell us about a time when you knew you were doing the right line of work?

AM: When I was in Romania, I went back and worked with Funky Citizens during a time when the corruption fight was prevalent and the DNA – the National Anti-Corruption Directorate – was doing an impressive job at putting high-level politicians behind bars on significant corruption charges. When I got there and saw what Funky Citizens was doing, when I saw people massively protesting on the streets of Romania – which is unheard of, as many post-communist or post-Soviet Eastern Europeans would understand, because of the fear instilled in the people – there was a dampening of participation of any kind, much less coming out on the street against your government. When I saw all of that, for me that was a moment when I knew that this is important work and that the people understand this is important work and there are many ways to engage in the anti-corruption fight, from staying up to date about your own country’s current affairs to raising your voice in resistance to creating your own anti-corruption project.

E4C: What tools can you recommend to coders interested in working on the kinds of applications that you help develop?

AM: One of our missions at The Engine Room is to guide organizations and activists to better employ tech and data. But we realize that – perhaps shocking to some, given our mission – tech isn’t the powerful thing. Rather, it’s the people behind the tech that’s the power. We’re not tech evangelists. We believe that every organization has its own needs and every project has its own requirements because it’s working to improve a complex, unique public problem with many moving pieces. We work first to understand that landscape before we recommend any sort of tech. It’s not like we have a recipe, so to speak.

“Tech and data are important but not enough, not without a deep understanding of the problem and the humans impacted by the problem.”

A lot of our work around the Engine Room has to do with this same theme, that tech and data are important but not enough, not without a deep understanding of the problem and the humans impacted by the problem.

On the other hand, something cool that we’ve started to do after the pilot program are “replication sprints.” After working with Quién Compró, we issued an open call to organizations that might be interested in the technology. There was a lot of interest immediately, we got tons of applications and selected four in Eastern Europe. We held a replication sprint with a few civil society organizations there. Representatives met with our technologists over four days and we built out that technology for their platforms.

Read more about it on our blog: Microtasking to fight corruption: Reflecting on our latest replication sprint in Eastern Europe.

This is the second in a series on principles based on the textbook Humanitarian Engineering: Creating Technologies that Help People, by Kevin Passino. This series is adapted by the author for Engineering for Change. Download Humanitarian Engineering, 3rd Edition, for free. It is important to form good relationships with the people in the community you are going to work with, whether this is a community where people live, or an educational community (e.g., for STEM education)....

If you want to solve a problem quickly it helps to get many minds working together to find a solution, and that’s what happens...

This article is part of a series by students in the Sustainable Development program at Lehigh University in Bethlehem, Pensylvania (USA). The articles reveal...